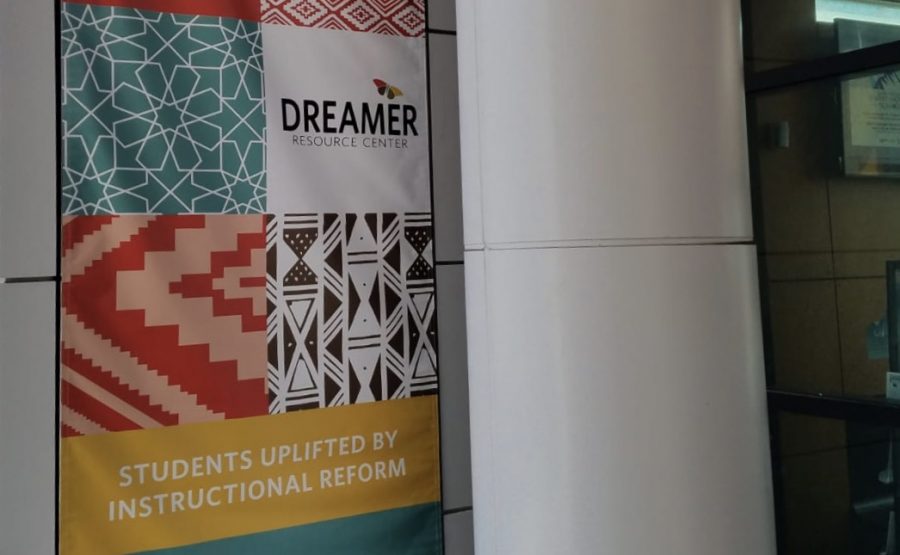 Antonio Marquez once joked about getting “Dreamer” tattooed on his forehead so financial aid workers could more easily recognize him for who he is. Marquez struggled for years to get the assistance other students take for granted.

He was caught off-guard recently during a writing exam break at SDSU when another student asked, “so you’re a dreamer?” For a moment he forgot about the John Lennon quote on the t-shirt he was wearing and thought maybe he did have a tattoo on his forehead.

“I identify as a dreamer,” said Marquez, but he’s not the only one — and that’s just part of his identity. Marquez is also a journalist, an uncle and a big-time Power Rangers fan.

Marquez participated in the UndocuStories panel, a series of events put on throughout the San Diego Community College District and part of a statewide week of action initiative by California Community Colleges in order to support undocumented students.

The district announced it will be receiving a $336,000 grant to expand services for undocumented students and build community support. Statewide, the California Campus Catalyst Fund has raised $10 million to fund programs on 32 campuses over the next three years.

Peralta and Velazquez are UCSD students. Velazquez’s mother is a house cleaner who once brought her young daughter to the state capitol to advocate for workers’ rights. The experience sparked Velazquez’s interest in politics.

Velazquez was motivated toward her calling, but her mother warned her to hide her undocumented status. It wasn’t until she needed to apply for college that she opened up.

She was accepted to the universities she applied to, but couldn’t afford tuition and housing without the ability to qualify for financial aid. She had to start her college journey at Palomar Community College in San Marcos.

“I was soft spoken,” Velazquez said. “The dean of student affairs made me speak up and challenge the male dominance on campus, which helped with my accomplishments and gave me a voice.”

Now in her senior year, Velazquez teaches other UCSD students how to lobby at the capital and talk to their representatives. She also plans to attend law school or go into a public policy graduate program.

Avila hopes to transfer to UCSD to study political science. The current City College Price Scholar’s dream job is to one day sit on the Supreme Court. He’s not happy about the recent confirmation of Brett Kavanaugh.

Avila presented powerful words on the need for community organization to overturn negative policies that will continue to affect future generations.

Avila doesn’t see his generation as the first dreamers. He humbly points to the sacrifices made by the generation that raised him.

“My mom hasn’t been able to see her mom for the past 18 years,” Avila said, adding, “this nation was founded by immigrants.”

This summer, Marquez visited New York to see the statue “Liberty Enlightening the World,” but at the time, America didn’t seem so enlightened to him. Standing beside the ultimate symbol of freedom, he didn’t feel free as an undocumented person.

On top of the Trump administration’s moves to terminate DACA, in April, the Department of Justice announced a zero-tolerance policy to illegal entry along the southwest border.

During a May speech at San Diego’s Friendship Park, a historic meeting place on the U.S.-Mexico border, Attorney General Jeff Sessions stepped up his rhetoric announcing that  100 percent of illegal southwest border crossings would be prosecuted and migrant children would be separated from adults.

In late April, the New York Times reported that more than 700 children had been separated from their families, including more than 100 children under the age of four.

By the end of May, HHS announced it had close to 11,000 migrant children in custody.

“Knowing that someday kids and grandkids will be reading about this moment in history gives me strength during these difficult times,” he said.

Peralta went from being a high school dropout working at Burger King, to a rising City College student, to working at a lab doing cutting-edge Alzheimer’s research at UCSD. Now he’s a board director for San Diego Border Dreamers, helping to organize undocumented student solidarity, rapid response networks and campaigns against bonds to fund detention centers.

Marquez worked at McDonald’s between studies. He also spent time in Washington, where he worked in agricultural fields alongside fellow migrants.

Even though Marquez received denials from his SDSU applications, he kept taking classes at City College and racked up four associate degrees. Marquez worked hard to get good grades and earn a scholarship. He wrote for the City Times and worked on Newscene.

“There will always be some ‘güero’ telling our stories — and some people want to twist our words around,” Marquez said. “But if we unite as a community, we can change the story … we’re at a pivotal point where news and community have to come together.”