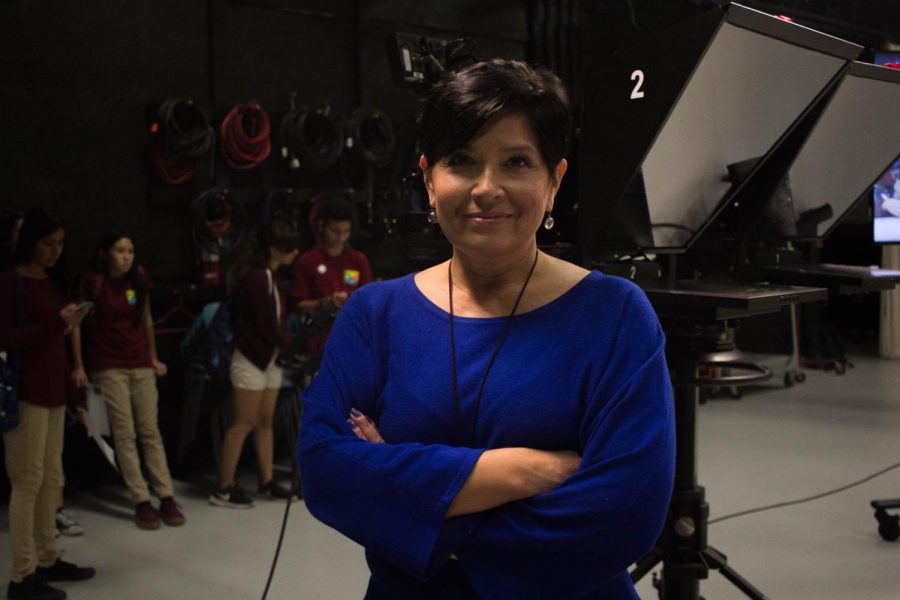 Editor’s Note: More on this story, plus additional pictures of professor Laura Castañeda and success stories from her former RTVF students, will be included in the fall edition of Legend magazine, available on newsstands and online on Tuesday, Dec. 11.

Opening the remodeled, state-of-the-art studio for the radio, television and film department in February 2016, where hundreds of past students went to see, was what Professor Laura Castañeda described as one of the proudest moments of her career.

“That was the fruit of my labor all in one place,” she said. “I was overwhelmed. I cried just seeing all that success in one room.”

Castañeda is the editorial advisor for San Diego City College’s Newscene, a 30-minute weekly newscast produced by students. After this semester, she is leaving City College and the department that she has dedicated her life and career to for nearly two decades.

Castañeda was recruited by RTVF department founder Hope Shaw. For Castañeda, Shaw was a mentor and convinced her to teach a newswriting class in 2000.

Prior to City College, Castañeda worked as a production assistant in her hometown of Chicago in 1987. She graduated from the University of Illinois and worked her way up to writer, assignment editor, and field producer all before she put together her demo reel.

She landed a job in Tucson, Arizona where she covered everything from the law enforcement beat to border reporting along the U.S.-Mexico border.

Castañeda then started reporting at the television station KGTV in 1995, and from there, moved to Channel 4 with San Diego Insider Magazine.

Castañeda joined Kerry Teeple, who was teaching Newscene on his own, and began co-teaching the class with him.

Newscene runs a unique structure compared to a typical class, free of essays and quizzes. There are two instructors, one focused on editorial aspects like writing and performance, and another focused on production in the studio.

Since then, the success of journalists inside and out of Newscene is evident in both the San Diego market and beyond.

“It’s not often a media instructor turns on the TV news and sees their students on every station in town, or even as the host of a national beauty pageant on Telemundo, or as a meteorologist on the TODAY show or the Weather Channel,” Professor Castañeda said. “When I’m driving on the freeway I hear my former students on the radio doing traffic reports.”

Luzdelia Caballero was a Newscene student and is now a weather anchor and reporter for television stations NBC Palm Springs and Univision.

“I had the pleasure of being under her instruction for three semesters and learned how the power of storytelling can both inform and engage the community,” Caballero said. “I learned that creativity should not be silenced but instead be used as fuel to continue to find out-of-the-box ways of telling a story.”

Castañeda found herself throughout the years being not only an instructor to her students, but a counselor as well.

“(Castañeda) has been my lifeline since I walked into her classroom,” said Phoebe Aoe, a former student and current producer for television station FOX5 San Diego. “I was lucky enough to call her my mentor, and now she’s like family.”

A big part of Castañeda’s job is taking students who want to move onto their first jobs in the industry, and making sure they are ready.

“I’ve learned to be a better storyteller and on-camera personality. (Castañeda) taught me how to put my reel together and it helped me get to my first market,” said Billy Khang, a former City College student who is now a multimedia journalist for television station KYMA News Yuma/El Centro.

One thing students know about Castañeda is her tenacity, which she projected onto her students.

“We carry (the lessons) with us every day in the field, through our storytelling, our courage to chase stories, our eagerness to seek truth and justice, and — most importantly — through our desire to connect with our community,” Caballero said.

Castañeda is adamant this is not the end of the road for her. She was offered multiple teaching positions and more announcements on her future will be coming.

In addition to working on a screenplay and writing books, she is looking forward to more quality time with her family.

“As journalists we are facing tough times but that doesn’t mean it’s time to quit,” Castañeda said. “We need more journalists, (who are) better trained, and who are willing to roll up their sleeves, come in early, stay late, and who know and respect ethics.”