Dream of MLK lives on in City College float

City College looks to make an impact at the annual MLK Day Parade with a larger-than-life float. 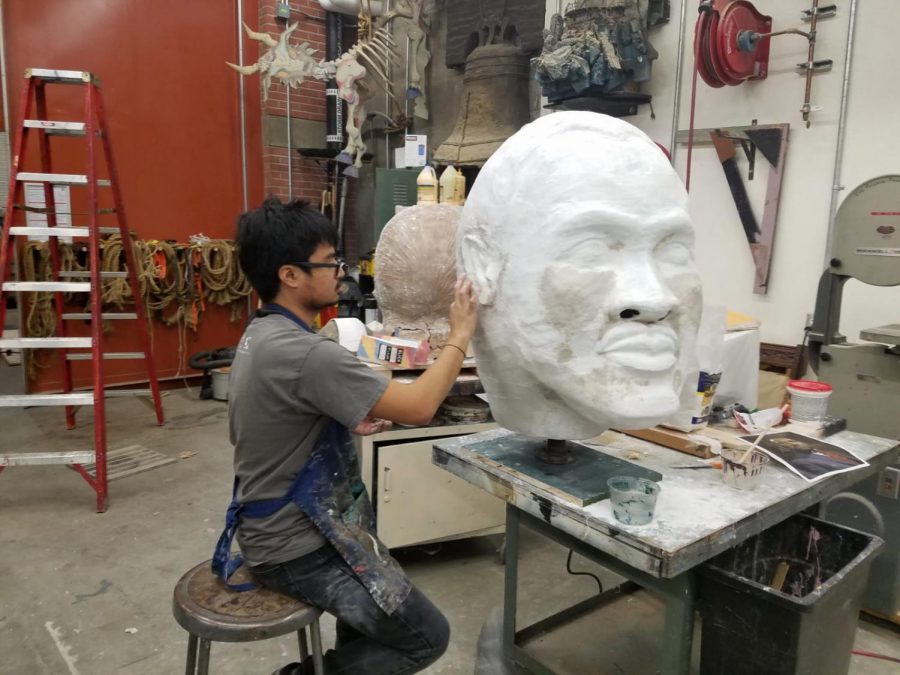 Student volunteer Christian Sin works in the theater on set designs when he is not working on City College's MLK Day Parade float. Photo by Brian Mohler.

Marching with Dr. Martin Luther King Jr. was one of this country’s most significant historical events. A modern-day chance to march with MLK will be available in downtown San Diego during the MLK Day Parade tomorrow.

San Diego City College will be participating in the 39th annual MLK Day Parade with a float that will be larger than life.

Numerous volunteers have spent over 100 hours creating the City College float, which will feature a 14-foot moving MLK figure.

Professor Duane Gardella, who has helped design the City College float the past six years, is excited to see the crowd’s reaction to this year’s giant MLK.

“It’s not a float, per se,” said Gardella. “It should be like nothing else and look like it is walking with the people.

“Kids in the crowd might be frightened or amazed.”

Gardella taught a drama class last fall in which students came up with the idea, but he admits he helped steer them in the direction.

“It’s based on the giant puppets from San Miguel de Allende … the Mojigangas,” said volunteer and Dean of Student Affairs Marciano Perez.

The tradition was brought to San Miguel de Allende in Guanajuato, Mexico by the Spanish. Costumed figures called gigantes y cabezudos (giants and big heads) are still part of festivals throughout Spain.

City College’s MLK Mojiganga will wear a gigantic doctoral gown, which was sewn by numerous volunteers like Dora Meza, who also works as an admissions supervisor.

“Freedom through education is this year’s parade theme,” said Perez. “The need to be educated is not necessarily about a degree but about knowing what’s happening in society.”

“Dr. King’s message was about unity,” said Perez. “That’s what the float and parade are all about.

“You’ve got students, faculty, staff and family coming together and united around creating something … living out (MLK’s) message about giving back and serving others.”

There will be dozens of floats, marching bands and drill teams, but Perez expects City College to stand out this year.

“Some groups use the same float each year, but every year we do something different,” said Perez. “A couple years ago we made a replica of the MLK memorial monument in Washington D.C.

“(The replica) is now in the student affairs office if anyone wants to see it. It was 12 feet tall so we had to cut it down to fit it in the office.”

Schools, churches and community organizations make up a list of almost 100 participating groups.

Each San Diego Community College District college will feature a unique float. Students, faculty, staff, alumni, family members and the community are invited to partake in the event.

The parade starts at 2 p.m. on the southwest corner of Waterfront Park (near Ash Street and Harbor Drive) and travels past the B Street Pier. It turns left on Broadway Street for one block, turns right on Pacific Highway for two blocks and ends at G Street.

Those wishing to participate in the City College section of the parade are asked to arrive at the staging area in front of the County Administration building near Grape Street and Harbor Drive at 12:30 p.m.

Parking is available under the County Administration building for $10 between Pacific Highway and Harbor Drive on Ash Street. Paid parking is also available near the cruise ship terminal on Broadway.