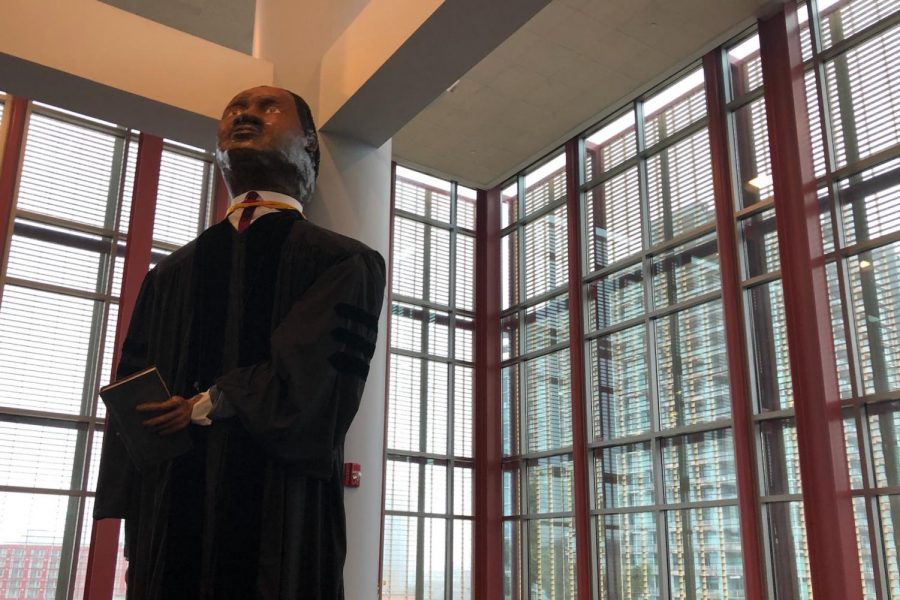 A Martin Luther King Jr. figure is located inside the Learning Resource Center as a commemoration for Black History Month. Art professor Duane Gardella created the likeness for City College's MLK Parade float. It will be on display until April 15. By Elisabeth Vermeulen/City Times

The dates coincided with the birthdays of Abraham Lincoln and Frederick Douglass.

San Diego City College celebrates throughout the month of February with events ranging from weekly Black Film Fridays to visits from activist artists and speakers.

“It is about celebrating the past, present and future,” said Mariah Jameson, a City College student and president of UMOJA Club. “It’s about learning where we came from and where we want to go. It’s a celebration. It’s a party. It’s a time to be proud to be black.”

The evolution of art and activism is this year’s theme for Black History Month, according to Jameson.

“Black history ties into everyone’s history,” she said. “It’s not just about being black or celebrating being black. It’s about celebrating the brotherhoods that are connected to it. It’s important because City College is very diverse.”

Black Film Friday: “School Daze”
Feb. 22, 6-8 p.m. in MS-162
The film is about the clash between light- and dark-skinned African-American students in a fraternity.

TED Talk Screening: The Danger of Single Story
Feb 26, 2-3:30 p.m. in AH-200-A
Chimamanda Adichie talks about stereotypes and the importance of being open-minded.

Uyen Pham contributed to this report.