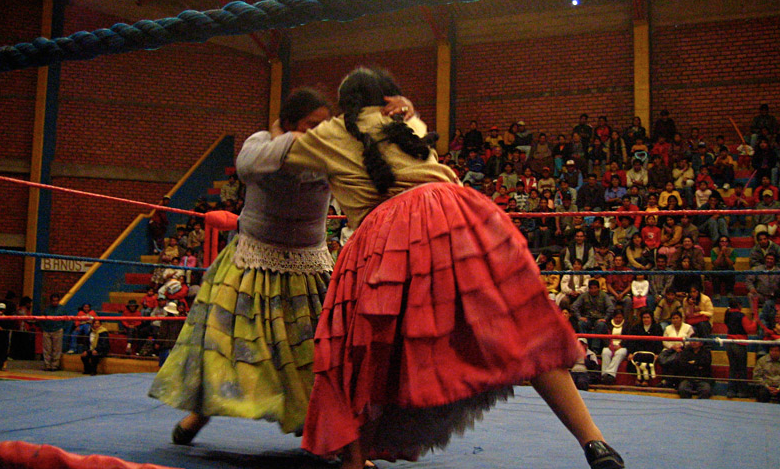 Female wrestlers in Bolivia have a bigger battle outside of the ring. Photo courtesy Mamachas del Ring

Espar, the newest hire in the City College music department, composed the musical number for the film.

“This is my first year (at City). I started in the fall, and I heard about the world cultures program and wanted to be involved,” Espar said. “Running through the list of film projects I’ve been involved with, this seemed like the most appropriate. There’s such a thread of cultural anthropology going through this film.”

The film follows the story of Carmen Rosa, who during a cultural revolution of the 2000s, became internationally famous for being the first wrestler to wear traditional “cholita” garb in the ring, and one of the few luchadoras in a sport dominated by men.

Indigenous people like the Aymara and Quechua, who call themselves “cholitas” and “cholitos,” faced widespread discrimination and sparked a revolution in the acceptance of indigenous people in Bolivia.

“Cholitas” typically work as servants to the upper class or as street merchants, and wear colorful traditional clothes.

Their style includes skirts with billowing petticoats, shawls with elaborate jewelry, and tall bowler hats worn at angles that seem like they should fall  off their heads.

The bold, eye-catching looks make “cholitas” easily spotted targets for discrimination. It makes it difficult to exist without changing the way they dress to fit in with modern society.

The grassroots revolution efforts culminated in the 2000s with the election of Bolivia’s first indigenous president, Evo Morales.

Rosa, herself a street merchant, found it challenging to balance her work life with her burgeoning career.

With fame came resistance as well. Some loved her anachronistic traditional clothes in wrestling, others objected to it and to women in the masculine sport of professional wrestling, or lucha libre.

Rosa’s league, the only sanctioned league in Bolivia, pushed back as well. Rosa alleges the league’s commissioner, Don Juan Mamani, became jealous of her rising stardom. He later barred Rosa and two other “cholita” luchadoras from competing. He later claimed Rosa lied about why she was asked to leave.

As her fame continued to increase as she kept fighting for acceptance, her ability to focus on her family and her job as a street merchant waned.

Even Rosa’s husband expressed disapproval, demanding she choose wrestling or her family.

The film ends with Rosa uncertain of her future and whether she could continue to wrestle, a reminder of her continuing struggle to be accepted as a “cholita” luchadora.