From sexual harassment to human trafficking, seven strong women tell their stories at She Was Warned: The Legalities of Being event. 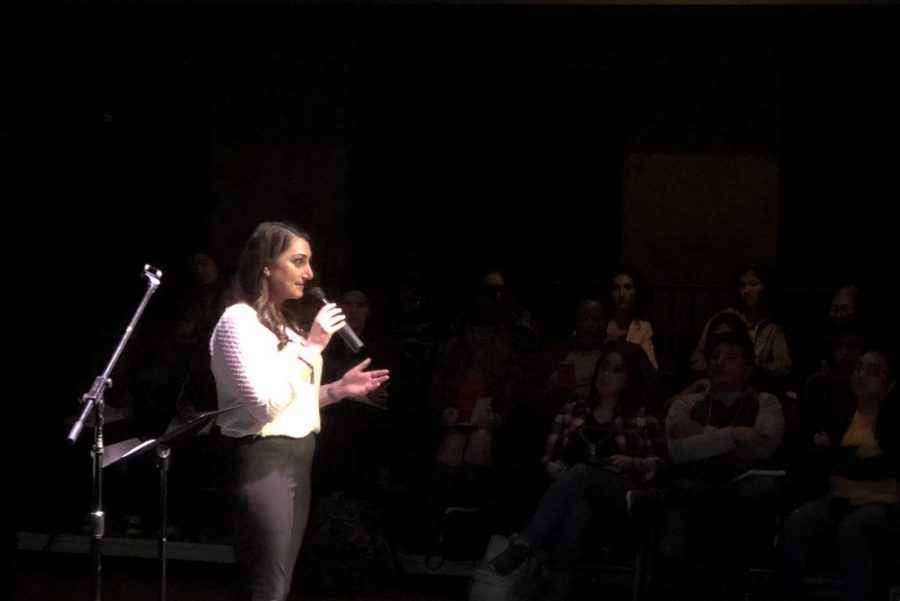 Sara Jacobs recounts the criticism she received while running for Congress. By Kristin Dixon/City Times

Editor’s Note: A previous version of this article mistakenly paraphrased Nyisha Green-Washington’s quote where she referred to herself and other community members as people of color, using the term “colored woman” instead of a “woman of color” as per AP style guidelines.

The struggles of being a woman were discussed on Tuesday evening at the fifth annual Social Justice & Education Conference.

The She Was Warned: The Legalities of Being event was the first at this year’s Social Justice conference. It was the third year this specific event has been hosted.

Seven women in the San Diego community spoke about navigating their lives and the legal issues that affected them by being who they are, a woman.

Isabel Vasquez-Hunt endured sexual harassment at the hands of her boss. With the strength of other woman harassed, a lawsuit was filed and Vasquez-Hunt was able to take down her harasser and free herself.

“There are women out there ready to help anyone who needs support,” said Vazquez-Hunt. “I am one of them.”

Sara Jacobs, a former congressional candidate in the 49th District, spoke about the criticism she endured. People commented about her appearance, her voice, her clothing style and much more. Jacobs pointed out these are things that men do not get criticized for.

“We need more women and young people and people who look different in positions of power,” Jacobs said. “People are only going to start accepting that when they see leadership who looks different and sounds different.”

The issue of human trafficking was brought to light at the event by Cierra Robinson, a victim who the justice system failed. Instead of helping her, they labeled her a monster to society.

“Human trafficking is one of the most utterly and tragic human rights issues right now,” Robinson said. “It splinters families, it undermines the rules of law, and it spurs other criminal activity.”

After she was released from prison, Robinson enrolled at San Diego City College and is pursuing a psychology degree. She is the founder of Inspired Innovation, which is a nonprofit that helps incarcerated individuals receive a higher education.

Laura Walcher, who had two abortions, spoke about her stance on abortion. She believes it is a woman’s choice what she does with her body.

Following Walcher was Itzel Guillen, who is a recipient of Deferred Action for Childhood Arrivals and fights for the rights of immigrants in this community. She works at Alliance San Diego as an immigrant integration manager. She helps immigrants integrate into the San Diego community.

Nyisha Green-Washington, spoke about being a woman of color living in a white community. She highlighted the blatant racism she endured over her lifetime, living as a black woman.

“I share this story because being silent and complacent is not enough,” Green-Washington said. “To sit and watch harm being done to our most marginalized is part of the problem. To my allies, use your privilege if you see something like this happening to black people and folks of color, step in, it can make a difference.”