City College professor passes on her love of the environment

Lisa Chaddock is the advisor of the Audubon Society on campus. 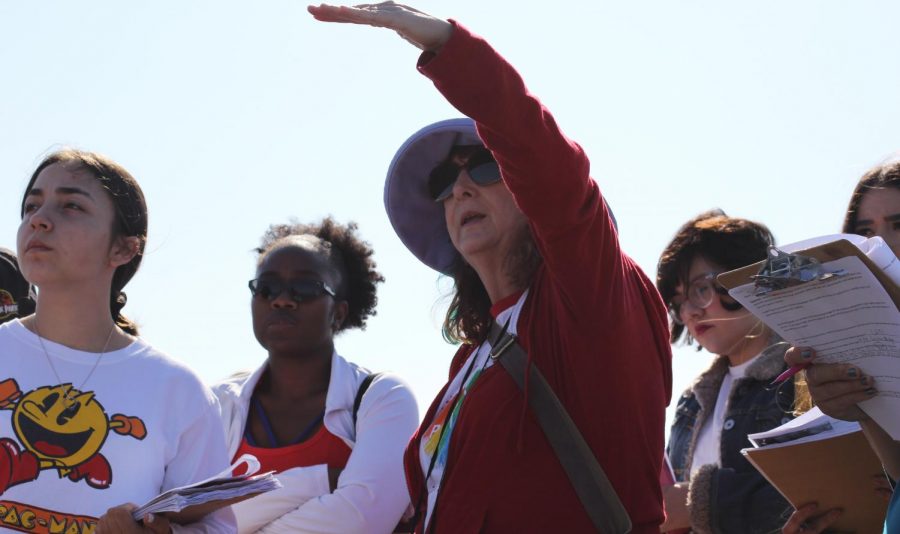 Lisa Chaddock has been a member of Audubon for over 25 years.

Editor’s Note: This story was featured in the fall 2019 edition of Legend magazine. View it here.

Professor Lisa Chaddock teaches geography at San Diego City College, but when she is not in the classroom, she spends her time as an advisor for the Audubon Society on campus.

The Audubon Society is an organization that focuses on the protection of birds and other wildlife, while also advocating for a cleaner environment.

Chaddock joined the Audubon Society during her time at San Diego State University, where she majored in Environmental Geography and minored in Ecology and Native American Studies.

She brought the club to City College after she was hired on as a contract professor in 2014, in order to give her students the same opportunities she has had.

“We have planted the native plant gardens around the campus,” she explained. “We have done things with US Fish and Wildlife Service, with Otay Valley Regional Park, and Mission Bay.”

The school’s chapter has since been recognized by the National Audubon Society for all of the work it has done in and around San Diego.

The club received two awards in 2017 at the National Audubon Convention, which they travel to every other year. One of the awards was for the club and the other was for Chaddock herself.

“That was a pretty huge thing to get both of those awards,” Chaddock said. “I was kind of blown away by that.”

The convention event is environmentally conscious as well, by only taking place every two years, there are less people who have to travel long-distance and increase emissions.

Chaddock serves as the board vice president for the San Diego Audubon Society, also.

“I’ve stuck with Audubon for now almost 25-30 years,” Chaddock said. “Some of those kids (in City College’s club) might become professors and do the same thing.”

Seeing her students follow in her footsteps has been a driving factor for Chaddock to continue heading the Audubon Club.

“I had two students up there speaking and I felt like, huh, I have closed the loop because I’ve passed this on and somebody else is taking it up,” Chaddock said, when talking about speeches her students gave in front of the Mission Bay City Council.

Chaddock’s impact on her students has not gone unnoticed.

“She’s an amazing professor. She really cares about her students,” Karina Ornelas, Vice President of the Audubon club at City College said. “She is the greatest professor I have ever seen.”

Ornelas spoke of all the opportunities that the Audubon Society and Professor Chaddock have given her. One of her favorite memories was being able to travel to Milwaukee for the National Audubon Convention.

“The professor is a person you can come to because she is always available to you,” Ornelas said.

Students in her classes have also noticed the impact that Chaddock has had on environmental reform in and around San Diego.

“Being in her class has opened my mind up to what’s happening around the world climate-wise,” Kathryn Green, a student of Chaddock’s said. “She is a super interesting teacher that is heavily educated on what she’s teaching.”

Chaddock and the Audubon Club have big plans for the future of environmental reform at City College, as well as all around San Diego, including starting community gardens in Otay Mesa.

They plan to create a space where children and their families can spend quality time together by planting native gardens that will foster butterfly and bird habitats.

“You get to watch your birds and butterflies in your mini garden that might be the only garden you have as a person with an apartment,” she said.

Chaddock is most drawn to the club’s mission of restoring the planet, rather than sustaining it, a key trait in the mission of Audubon. They also value the idea of humans sharing the planet with the animals on it.

“Audubon is more like, we have to defend other species because we share the planet,” she said.

She explained how ecosystems are intermingled, and if one thing changes, it could throw off the equilibrium of the planet. Her goal is to not only prevent that from happening, but to help those ecosystems thrive.

Chaddock’s passion for the society and climate in general has led her to some life-changing opportunities. She has been able to travel to several different states participating in advocacy work for the climate, through the Audubon Society.

Chaddock hopes to continue inspiring incoming Audubon members through their acts of charity and environmental reforms in order to rebuild the current ecosystem.

The Audubon Society meets every other Friday at noon in room S-108 at City College.