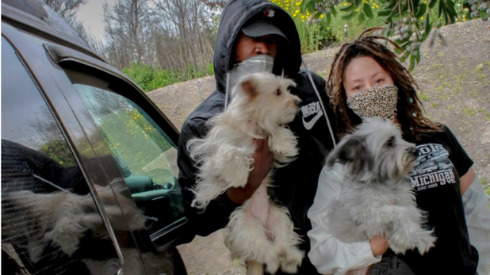 Editor’s note: This is the sixth in an occasional series of journal entries produced by City Times staff highlighting the impact of the COVID-19 pandemic on members of our community.

Nicole Mckissick, her boyfriend Ty Johnson, and their two dogs arrived in San Diego in a 1998 Chevy Express in March 2019.

After living in Indiana for five years, Mckissick felt like she was not flourishing and needed a change.

Instead of falling into the societal norm of renting or buying a house, Mckissick found out about van life.

Mckissick is an art major at City College and has lived in her van for over a year now.

“I was getting fed up with paying money into someone else’s property,” Mckissick said.

But the COVID-19 pandemic has changed how McKissick lives, making what was a simple life into something far more complicated.

Mckissick was initially inspired to adopt van life after watching a Netflix documentary on minimalism. The freedom to pick up, go and experience life appealed to her.

She would go on RV camping trips with her family growing up, so Mckissick believed it would be an easy adjustment.

After spending a year and half researching laws and different builds for the van, she and her boyfriend decided to go through with it.

“It was a lot more difficult than we thought,” Mckissick said. “Looking at the YouTube videos, they make it look so easy and glamorous.”

Initially the van was gutted out with only carpet. Now they have a bed, a portable stove, a sink and other basic household items. Check out McKissick’s video diary.

The plan was to do a year on the road to adventure before arriving in San Diego, but once in the van, they realized it was difficult without having a remote job to make money.

This led Mckissick and her boyfriend to find a job at FedEx to get a steady income.

But Mckissick had to leave her job at FedEx on March 21, amid the pandemic due to health reasons.

“I am self-quarantining,” Mckissick said. “I have asthma and I don’t feel safe working in that environment and putting myself at risk.”

Mckissick has been extra paranoid about washing hands and sanitizing everything since the proximity in the van is very tight.

During the week, they usually hunker down by a gas station in Otay Mesa.

“There is a Wendy’s and they have WiFi,” Mckissick said, “which was nice because I could literally like go inside and sit down and have my own little moment if I needed to work on assignments or whatever.”

She has to rely on her own hotspot now that most businesses have closed their doors.

Mckissick has family in San Diego, so on days off, she parks at her mom’s house and uses it as a home base.

“We go to my mom’s house to shower,”  Mckissick said. “(It’s) more comfortable.”

Each lifestyle brings its own benefits and struggles. This is no different.

“Before quarantining, the most difficult part of living in the van was the parking,”  Mckissick said.

Due to changes in San Diego city ordinances, people are prevented from staying in their vehicle where overnight parking is not allowed, including on city streets, near the beach and outside businesses.

“When we got here, the laws allowed you to sleep in your vehicle,” Mckissick said. “They don’t allow that anymore.”

They received a ticket on one specific occasion when they were staying at the beach.

“You feel like you are in high school and you’re sneaking to do everything,” Mckissick said.

Since most of her classes were previously online, Mckissick adjusted well to the shutdown of the City College campus.

“I kind of like it, though, (I) am a reclusive person anyways,” Mckissick said. “So it has given me time to work on art projects that I have put aside, or my writings or different little things that I haven’t had time for.”

Before the COVID-19 pandemic, Mckissick and her boyfriend would spend most of the time outdoors at beaches and parks.

“We were rarely in the van unless we needed to rest or hang out to watch a movie or something,” Mckissick said.

Since the shutdown of parks and beaches, Mckissick has been limited in the amount of time she can spend outside.

“I can deal without having a shower every day or having modern conveniences,” Mckissick said, “but being cut off from nature has been a real huge adjustment.”

Along with the opportunity to spend more time outdoors, living in a van allows you to save on money and on rent.

The average cost of rent in San Diego is over $1,700 a month, according to a news release by city councilman Scott Sherman in 2019.

“We have goals to own our house and different things to invest in long-term,” Mckissick said. “Having this lifestyle, we sacrifice some conveniences but in the long-term, I feel like it’s worth it.”

Mckissick has received many different responses when she shares that she lives in a van.

“Surprisingly, people’s reactions have been very accepting,” Mckissick said. “A lot of people are intrigued.”

This lifestyle is not favored by some, and they have expressed their opinions to her.

Mckissick does not let the naysayers get to her. Instead, she tries to spread the word about the benefits of this life.

“I feel my generation, and generations younger than me, are sick of this cycle of doing everything by the book,” Mckissick said. “There is nothing wrong with living a different lifestyle.”

Mckissick is happy with her decision because she is not focusing on making a living, but instead focuses on spending quality time with friends and family.

“I have met a lot of beautiful and amazing people living this lifestyle,” Mckissick said. “Van life has opened me up to people more.”

Do you have a unique story to share about how the COVID-19 pandemic has impacted your life? Let us know on social media @SDCityTimes or leave a comment below.