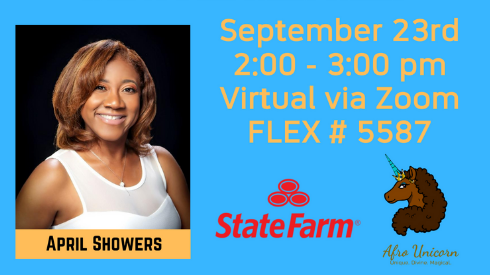 April Showers, the founder of e-commerce apparel brand Afro Unicorn, will be the first in a series of entrepreneurial speakers hosted by Mesa College’s Business and Work-Based Learning departments.

The event is open to students from all SDCCD campuses, including San Diego City College.

As owner and operator of a local State Farm franchise, Showers has worked to empower individuals, especially women of color, to create multiple streams of income as she believes no one should depend on a singular income stream for their livelihood.

The mother of two boys started Afro Unicorn after she was affectionately called a unicorn, but was unable to identify with the existing image of one.

The apparel brand was born from Showers’ desire to create a vision of a unicorn that more inclusively represented women of color.

Afro Unicorn was also designed to be a symbol of women’s financial independence.

Showers’ talk on how to financially uplift and empower people through e-commerce and franchise ownership will be held over Zoom on Sept. 23 from 2:30-4 p.m.

Registration for the event can be found here: