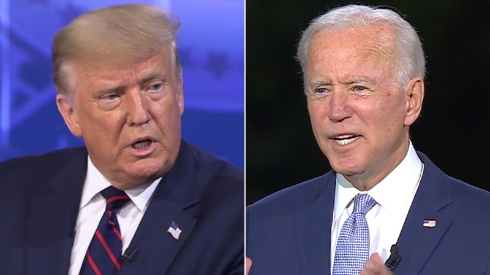 The first presidential debate between President Donald Trump and Democratic nominee Joe Biden will focus on a number of topics, including the coronavirus pandemic, the Supreme Court and the racial reckoning in the country, the debate commission announced on Sept. 22. CNN photo

The 2020 election is 35 days away and President Donald Trump and former Vice President Joe Biden will go head-to-head in their first debate tonight.

It is the first of three in all, including one featuring the vice presidential candidates.

The City Times staff compiled information on what you need to know for tonight’s debate.

Where is the debate being held?

The event will be hosted at Case Western Reserve University in Cleveland.

What time does it start?

The debate will run from 6-7:30 p.m. and will have no commercial breaks.

How can I watch it live?

All major news outlets like CBS, CNN, ABC and Telemundo will broadcast the debate.

What topics will be covered?

During the presidential debate, topics that will be covered will include the records of Trump and Biden, The Supreme Court, COVID-19, the current state of today’s economy, race and violence in cities today, and the integrity of the election.

What is the format of the debate?

The debate will feature six 15-minute segments on pre-selected topics. The moderator will open each section with a question. Each candidate will have two minutes to respond.

Will there be a live audience?

Compared to previous debates, there will be a limited live audience. There will be an estimated 60 to 70 audience members.

The average presidential debate audience size is 900 to 1,200 people. Everyone is expected to undergo testing for COVID-19, but a review of multiple news sources have not found specific details about the process of testing.

According to the Commission on Presidential Debates, there will be no handshakes between the candidates. The candidates and the moderator will not wear masks once on stage.

Chris Wallace is the moderator for the first presidential debate. The Fox News anchor has been known to be harsh on both political parties and a tough interrogator of politicians he is interviewing.

Wallace’s first presidential debate was during the 2016 Presidential Election between Hillary Clinton and then-candidate Donald Trump, which had 84 million viewers and received great reviews from pundits on both sides.

What are the polls saying?

According to the most recent New York Times/Sienna College survey, three-fourths of voters say the 2020 United States Presidential Election is the most “important election of their lives.”

City Times wants to hear your voice. We are looking for our community — fellow students, faculty, staff and alumni — to share their perspectives on the presidential debate and upcoming elections. You can send your thoughts in writing by email or share them on social media, including @sdcitytimes and #cityspeaks. You can also leave us a voice recording.