CalWorks is hosting a virtual puppet show on Nov. 20 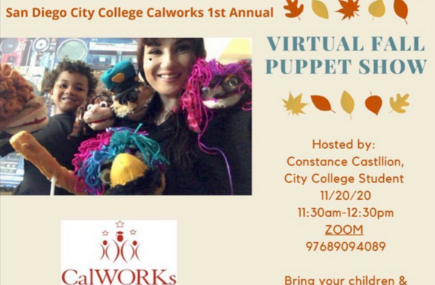 CalWorks is hosting a puppet show on Nov. 20.

With many City College students isolated from friends and family during the holidays, Zoom has become the best way to bring everyone together to celebrate.

CalWorks hosted a Halloween Arts and Crafts Day on Oct. 30 to give students and others the chance to enjoy the holiday virtually.

Another show is planned for Nov. 20.

There were a variety of rooms to participate in while a puppet show was being prepared. They included a watch party for the Charlie Brown Halloween special and holiday story readings.

After making sure that participants, which included parents who brought their kids, could hear and see the production on stage, CalWorks student Constance Castillion presented her puppet show.

The production was led by a firefighter puppet named Fred and a little girl puppet named Sophia. Together they went over the protocols of social distancing during Halloween and throughout the pandemic. Sophia started off by suggesting different songs to sing while washing your hands, such as “Twinkle Twinkle Little Star.”

Fred then suggested keeping a few disposable masks in the glove box of your car just in case one breaks and you need a replacement or you accidentally leave it at home.

“Baking cookies, carving pumpkins, and watching movies with your family would be just as good of a way to celebrate Halloween as trick or treating,” Fred said.

Sophia then led the transition to another topic she wanted to address during the show. This year has been extremely challenging, so she wanted to share a technique she’s been using to deal with the frustration she learned from her mom. Whenever a situation has you flustered, just remember to breathe.

Sophia emphasized that it didn’t matter where the frustration was coming from, as long as you remembered to take a long breath and focus on being constructive, you would feel better.

“It could be a broken toy or a bad day at school, as long as she remembered to breathe, Sophia could calm down,” the narrator, Castillion said.

With that helpful piece of advice, the show concluded.