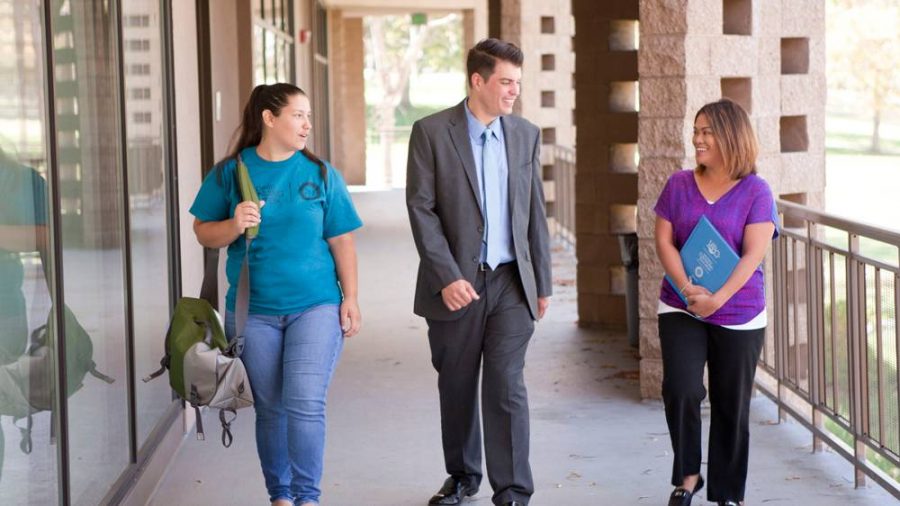 Carlos Turner Cortez, one of the four finalists for SDCCD chancellor, walks with students in this undated photo. SDCCD photo

And he was passed over every time.

That changed in July 2015, when he was named president of San Diego College of Continuing Education.

Now he’s hoping for the same outcome with his latest application, this time to replace Carroll in a role she has had for 17 years.

“I love working for the best community college district in the United States,” Cortez said in an interview. “The opportunity to serve our community in a different, bigger way is exciting and humbling.”

The board is aiming to make the final selection by late March and have the new chancellor start July 1.

Cortez wants the role of chancellor because he believes in the work of the faculty and administration at SDCCD.

“The opportunity to be able to help facilitate progress across our district and not just one institution is professionally a very attractive next step for me,” Cortez said.

In addition to his role as president of the SDCCE, Cortez is also adjunct faculty at Johns Hopkins University, New York University and UC Berkeley. He has been teaching for 23 years.

“I come at this work from the lens of an educator,” said Cortez, who completed degrees at Georgetown, NYU and USC. “It is important to have academics lead academic institutions because we understand what happens in the classroom.”

The most significant achievement Cortez has attained while president of SDCCE was developing the first strategic plan that focused on developing a fully online college within the organization. It launched with a pilot in July 2020.

Cortez is president of a multi-campus college, which he believes will be a useful skill for the incoming chancellor who has to supervise an organization that has multiple sites, including City, Mesa and Miramar colleges.

SDCCD is one of the largest of California’s 73 community college districts.

Vice President of SDCCE, Michelle Fischthal, has worked under Cortez since she was elected in February 2018.

“Dr. Cortez has been a role model for me in community relationship building,” Fischthal wrote in a statement. “His commitment to strengthening community partnerships and collaboration has resulted in our filling educational and work obtainment gaps we hadn’t prior.”

No relationship is more important to Cortez than with the students.

“If I were selected to be the chancellor, I would work tirelessly to provide the most robust opportunities to all the students we serve,” Cortez said.