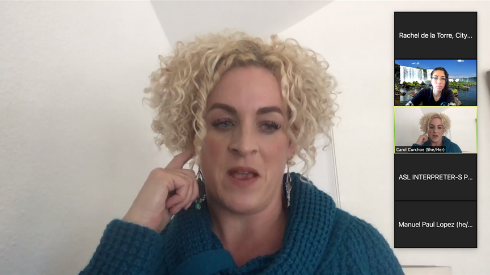 The fight for women’s reproductive rights is a hot topic, especially in the past few years. Yet, so much information about the topic of fertility is only spoken about behind closed doors.

The panel was a critical exploration covering sterilization, embryo research, in vitro fertilization, and other fertility treatments. It also provided a safe space for women to talk about their own fertility journey.

One of the most controversial, J. Marion Sims, sometimes called the “father of gynecology”  bought teenage slaves and performed surgeries on them without any anesthesia, according to historic and medical records.

“Sims’ unethical practices have led to unfounded stereotypes in the medical community”, Burton says, such as the belief that Black women have a higher pain tolerance than white women.

Burton encouraged Black women to find a doctor who looks like them.  A study done by reproductive health equity researcher, Rachel Hardeman, who looked through 1.8 million Florida birth records showed that Black newborn infants delivered by white doctors rather than black doctors are three times more likely to pass away, according to Burton.

“I see a lot of doctors wanting to take a step back, and not get involved in politics,” Burton said. “From the scientific perspective, I’m trying to educate everybody and bring them up on it because they are the ones that have the power and we need to bring them into the conversation.”