Students are to remain off school grounds for safety 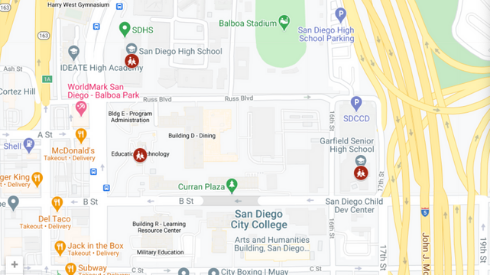 San Diego City College also closed its campus according to a tweet from the San Diego Community College District.

Due to police activity near @sdcitycollege, no in-person classes will be taking place on-site today.

“Early this morning, after consultation with the San Diego Police Department, we made the difficult decision to close our school campus for the day,” wrote Francisca Del Carmen, principal of SDHS, in a letter to families that was posted on Instagram.

A pursuit that began in National City led to a standoff between police and suspects at San Diego High School Monday night according to police.

“Two suspects fled from the vehicle armed with an apparent rifle and one handgun that was able to be seen,” said Lieutenant Matt Dobbs from the San Diego Police Department in a press conference this morning. “They eventually barricaded themselves inside of a trash dumpster on the campus.”

SDCCD announced on Livesafe, its community safety app, at 10:15 a.m. that the standoff at the high school ended but campuses will remain closed while law enforcement officials conduct their investigation.

Will update the story when more information comes.