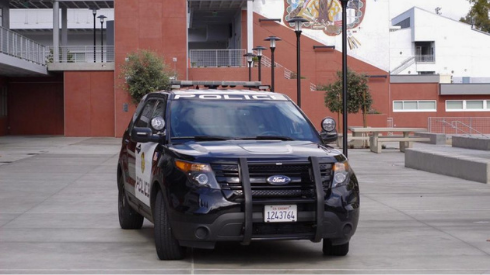 SDCCD Police is the largest community college police department in the state of California. File photo

As a result of the recent worldwide protests against use of force by police officers and systematic racism, the University of California, California State University and California Community Community Colleges are taking a hard look at whether campus police departments should even exist.

At times contentious, The Future of Campus Policing event hosted by KQED and CalMatters, amplified the stark contrast in policy reform recommendations between students, faculty, campus police and administration.

Student activists Bowens and Waters firmly stand for abolishing campus police, citing the lack of need for law enforcement, systematic racism and a critical need for increased funding for and access to counseling and mental health resources as the many reasons why.

Brown describes thinking that the idea of being stopped on campus for the color of his skin was a taboo until it happened to him. Brown, who calls for abolition of campus police, recounted being followed and interrogated by SF State campus police when employed as a resident advisor and moving his belongings from one campus dorm to another.

“You cannot reform a system that is inherently anti-black and based in white supremacy,” said Bowens.

When asked by moderator Felicia Mello if she thinks increasing diversity within campus police departments will help bring about change, Waters challenged back.

“Do we need to be policed? That’s ultimately the question here I don’t necessarily feel any safer with a black  officer than I do with an officer of any other race. The fact still remains that I am in police custody. Just the very instance of it alone for some can be terrifying,” said Waters.

Laney Community College Psychology professor Kimberly King, a leader in transitioning Laney college to an unarmed security model, sees the future of college and university campuses as racial and social justice institutions. Restorative Justice, mental health and de-escalation training for counselors, administrators and staff she believes is crucial for a successful transition to the unarmed security model.

University of California Davis Police Chief Joseph Farrow, who deems campus police necessary and said that he never sends an officer out in the field without a weapon, strongly disagreed with Water’s vision. Stating that responding to crimes committed against students such as armed robbery, assault and carjacking’s and preventing destruction of University property are some of the many occurrences on campus that require police.

“We have millions of square feet of landmass, billions of dollars of infrastructure, hundreds of thousands of people who come to our campus every single day and sadly some of them are victimized and having a police force there who can respond I think is really really imperative,” said Farrow.

What do you envision for the future of policing on college campuses, The San Diego Community College District wants to know. A new SDCCD survey on campus policing, sent to all district students and employees, is intended to assist the district in determining the future of police on district campuses.

Complete the 15-minute survey by April 30 and have your voice heard.