Chancellor Constance Carroll is being honored with a mural 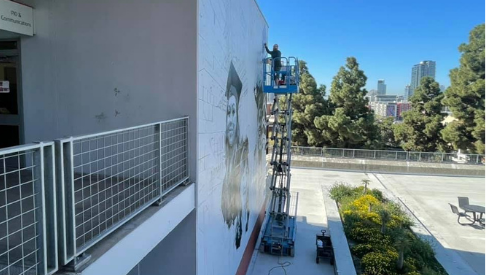 The artist is working on the mural that will honor the retirement of Chancellor Constance Carroll. San Diego City College Facebook photo

San Diego City College is starting to work on its new mural in honor of Chancellor Constance Carroll. She served as San Diego Community College District chancellor for the past 17 years.

“She has earned respect for her leadership and commitment to academic excellence,” wrote City College in an Instagram post.

This story was reported on today’s edition of News Radio Midday, a bi-weekly radio newscast produced and recorded remotely by the students from San Diego City College’s Radio, Television & Film program. You can listen to the show live at 1 p.m. every Monday and Wednesday either on 88.3 HD-2 or here any time.

The date for the unveiling has not been announced.

The decision to honor her came after her retirement announcement last year. In a College Council meeting last September, the council also voted to name the A building patio in her honor and dedicate the mural as well.