Produced by the staff of City Times, CityScene focuses on arts and culture 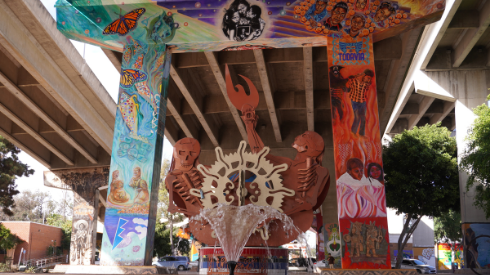 Chicano Park's fountain is featured on the cover of CityScene, a new art and culture magazine by the staff of City Times. Photo by Gabriel Schneider 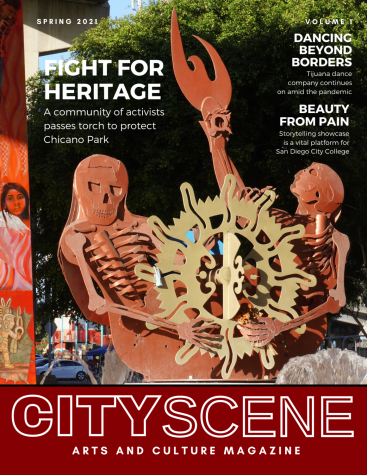 Click here to view the debut edition of CityScene magazine.

As the spring 2021 virtual semester comes to a close, City Times debuted its first volume of CityScene magazine, which focuses on arts and culture on and around the San Diego City College campus.

It marks a new direction for the digital news organization, which previously published an issue of Legend magazine each semester.

The new direction for the magazine comes as City Times formally partners with TV news, radio/podcast, magazine and independent Film to create City Times Media. All CTM content can now be found on sdcitytimes.com, representing the collaboration between the partners on a single platform.

The City Times team has reported virtually throughout the semester, providing the latest news for the San Diego City College community.

• A community of activists passes the torch to the next generation to protect Chicano Park
• San Diego City College hosts a storytelling showcase that gives students an opportunity to tap into the past and pave the way to the future
• A Tijuana dance company adapts to COVID-19 restrictions to build an international audience
• City College alum Nahla Valdez creates a music video for Vel the Wonder
• KSDS-FM Jazz 88.3 returns to the air as one of the few jazz stations left in the country
• D’Marcus Andrus, a City student, drops his debut album “Xodus” while still in school (podcast)
• A photo journal goes behind the scenes of the 6th Annual Festival of New Plays, which was recorded in the campus TV studio and streamed online for the first time
• #CityCookingChallenge host Jesus Lopez spices up your cooking with ingredients from City College’s twice-monthly food drive (May 4 episode)