City College alum creates an organization to help those in need 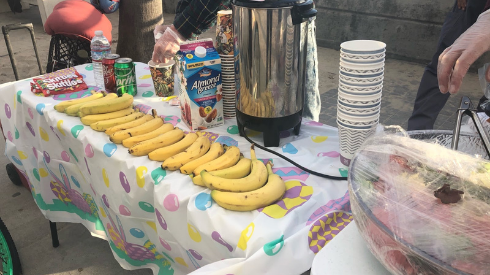 The sun had started to set and the Pacific Beach boardwalk was humming.

Vendors were packing up tie-dyed bikinis, a man was blowing oblong bubbles that wobbled and exploded, delighting nearby children. Priscilla Castro was unloading beat-up crockpots and serving dishes onto folding tables.

Every Wednesday and Friday Castro’s organization, The Community Front, serves hot vegan meals to unhoused citizens in the area. On this night in May, the dish was shepherd’s pie and some regulars had already gathered.

A year ago Castro was working for Live Nation helping venues cancel shows and process refunds amidst the early days of the COVID-19 shutdown. She moved back to San Diego from Los Angeles in March 2020 to save money when her job went remote.

“I was working 45 hours a week in the office and I would do side gigs bartending almost every weekend,” Castro said when describing her work-life prior to COVID-19 regulations. “I had plenty of distractions from what’s really important.”

When the video of George Floyd’s murder went viral in May, she immersed herself in the protests that followed.

“I went to as many as I could just to add another body to the crowd,” Castro said.

While there she learned about mutual aid, a system of organizing where community members work together to meet the needs of their neighbors.

Then in August Castro was furloughed. She was not used to having free time. Determined to make the most of it, she enrolled in classes at San Diego City College.

While at City College, Castro began to realize that what she really wanted to do was help people. She started searching for ways to accomplish this.

Summer was hot and along protest routes, she noticed many of unhoused individuals. She started to bring extra water for them.

Soon she was freezing bottles and passing them out in her spare time.

“Once the protests began to die down I thought,” Castro said, “Well this can be my form of protest.”

In September, she named her efforts The Community Front and since then their offerings have evolved from hygiene packs with hand sanitizer, masks, and socks, to the biweekly hot meal.

Castro noted the growth was a testament to the volunteers who’d helped and the outsized community support they’d received.

As the sun set, the boardwalk still hummed. Castro packed up as she bantered with some regulars.

This was also part of her aim – to provide unhoused individuals some much-needed camaraderie.

“Some of them are jokesters, so they’re excited to try out their new jokes,” Castro said.

As for her future, Castro said The Community Front is here to stay. She dreams of opening a community center that provides meals, laundry, and showers.

Jakob McWhinney was a student in DJRN 200, Newswriting for Multimedia, during the spring 2021 semester.