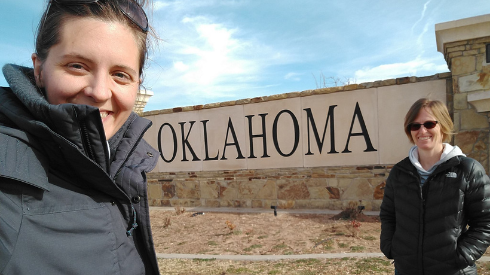 A quick, wide smile appeared in the now-familiar computer square.

She talked about how a simple change in setting, like using the gallery view option, made a huge difference in the final result.

“There are specific settings that make it easier to edit afterwards,” the San Diego City College alumna said.

McKee uncovered skills during her time at City College in 2018 that have come in especially handy during the pandemic and a cross-country move.

She dove headfirst into videography during a history class at City College, and found herself creating part of Monica Montgomery Steppe’s successful campaign for San Diego City Council.

For a class assignment, she reached out to the candidate, offering to interview her and create a video.

She had no formal video editing experience other than exploring software. But that didn’t stop her. At least not at first.

“This seems like something I could do,” she remembered thinking. “And then like — entirely panicked for several days after she said yes.”

She invited Montgomery Steppe to her home, set up an iPad and a phone, then filmed and edited content for her three pillar issues – economic opportunity, homelessness and police reform.

“I suddenly realized this was something I’d been interested in for a long time, and that whatever else I studied, I’d want to be able to make videos and get the information out there,” McKee said.

The People’s Councilmember remains laserbeam-focused on economic recovery for all, reimagining public safety, safe & healthy communities – our 3 pillars of governance. The grassroots movement continues. It takes all of us being stronger together. #ourvoicesmatter#peoplepowered pic.twitter.com/GWaJvVXZom

With a plan to move back to her home state of Oklahoma in early 2020, she envisioned expanding her social network, interests and business connections.

But McKee still found herself driven to tell personal stories that change the world for the better.

She remains involved in national and local activism in Tulsa, making adjustments along the way.

Her current videography project explores real COVID-19 stories through the eyes of ICU nurses and a hospice care worker.

A labor of love, the timeline is fluid.

The pandemic shifted results, but the drive to tell important stories, and the videography introduced during her City College experience has remained.

McKee said her professor had predicted as much.

“If you really invest your time, do something you’re interested in, it can open up new doors for you,” she was told. “And that definitely happened for me.”

Kathy Archibald was a student in DJRN 200, Newswriting for Multimedia, during the spring 2021 semester.