Through personal accounts, the exhibit illustrates that each person's mental health struggles are unique 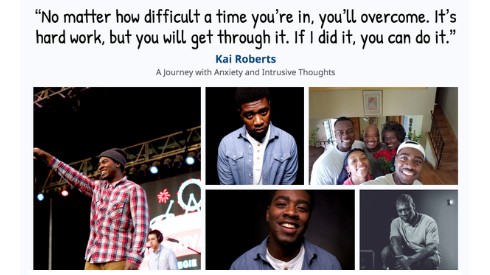 Kai Robert’s story of survival is shared in the Behind the Backpacks virtual exhibit. Active Minds courtesy photo

From fatigue and disinterest to obsessive thoughts and compulsions, the way a mental health crisis presents itself in each person is unique.

The interactive virtual exhibit Behind the Backpacks illustrates that by telling some of the diverse stories of families of those who died by suicide as well as survivors.

The exhibit hosted on Sept. 27 by San Diego City College Student Health, in partnership with mental health education organization Active Minds, brought attendees into the minds of various ages, races and genders all united by the impact of suicide on their lives and the lives of those closest to them.

“You know there are different ways that people interact with the word suicide,” mental health advocate and suicide survivor Kai Roberts said when telling his story in the exhibit. “Someone dealing with depression engages with it in one way and someone with anxiety engages with it in another, but both ways are valid and both ways are equally as debilitating.”

For Roberts, his anxiety and chronic negative intrusive thoughts manifested in symptoms of irritability, agitation, obsession, and fear rather than fatigue and disinterest, which are more commonly thought to be associated with suicidality.

According to the American Psychological Association, suicidality is the risk of suicide, usually indicated by suicidal ideation or intent, especially as evident in the presence of a well-elaborated suicidal plan.

Only after sharing his experiences with family and pushing past the stigma of mental illness in his community did Roberts seek life-changing therapy and begin to understand his condition.

Now Roberts uses his love for music to shine a spotlight on mental health awareness, performing original works at events across the country.

“A lot of people may not realize that there are so many people in our world or on our campus that are walking around with this face, that they are happy, that everything is great but underneath there might be a lot of pain,” San Diego City College Adjunct Mental Health Counselor Toni Martinez said.

According to Martinez, it is important to be aware of any unusual changes in behavior that persist, exorbitant energy and inability to slow down can be just as telling as fatigue and the desire to stay in bed.

If you suspect someone is suffering, Martinez continued, it is ok to ask them directly.

National and local rates of death by suicide slightly declined in 2020 from 2019, yet according to the September 2021 San Diego County Suicide Prevention Council report, suicide remains the 11th most common cause of death in the U.S., with COVID-19 being the 10th.

Despite the slight decline in suicides in 2020 from 2019, a CDC survey in July 2020 found 40% of respondents were struggling with their mental health in some aspect, considerably higher than reported in a 2019 survey over the same time period. Many of those surveyed cited illness, financial uncertainty and grief as factors negatively impacting their mental health.

Many hold back from talking about their mental health for fear of being a burden or looking inadequate but talking about it can provide considerable relief, Martinez explained.

Therapy is a collaborative process and treatment is designed to address the specific needs of each person. For those nervous about taking the first step, Martinez advised that the hardest part is showing up for the appointment, and just getting there is a huge accomplishment.

City Student Mental Health offers virtual counseling appointments for individuals, couples and families. The appointments are free to students and will not be recorded on their academic records.

Click here or call (619) 388-3055 to schedule an initial screening appointment where a mental health team member will assess your needs and schedule your first therapy appointment.

To immediately connect with a trained professional for mental health crisis intervention, services and information, call the San Diego Access and Crisis Line 24 hours a day at 1-888-724-7240.

The crisis line is available in 150 different languages and is also accessible via live chat Monday through Friday from 4-10 p.m.

“You do not have to wait for a crisis to reach out,” San Diego County Board of Supervisors Vice Chair Nora Vargas said at the Sept. 8 press conference. “We need to continue to promote this resource so that all members of our community know that trained professionals are standing by 24/7 to listen and connect.”