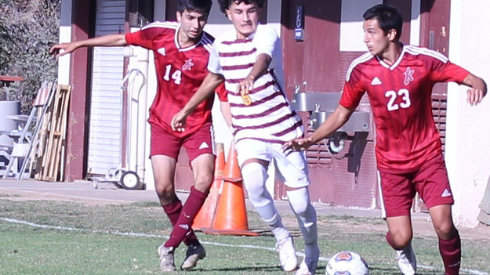 The Knights men’s soccer team put on an offensive showcase with a 6-3 victory against the Victor Valley Rams (1-1-3).

The win ends a seven-game losing streak for the team after setbacks throughout the season that helped the Knights build team chemistry.

Leading the way for the Knights was the efficient performance of winger Brandon Martinez (Hoover), converting 4 out of 5 shots into goals.

On the defensive end, first-half goalie Christian Medina (Eastlake) had his hands full with 5 saves.

“The team is very excited with the win,” Martinez said.

Opportunities to play soccer at the collegiate level at City were curved by the pandemic not allowing the team to have full practice at times with managing Covid-19 breakouts and many precautions.

The second-half freshman goalie attributes the win to “greater communication between teammates and listening to their coach,” Robert Fonseca (West Hills) said.
City women’s soccer extend winning streak with a shut out
The Knights women’s soccer team (4-1) couldn’t be denied against the Palomar Comets (1-4), winning 3-0 on Oct. 1.

Forward Tessa Fernandez (Rancho Bernardo), midfielder Anais Thompson (Poway), and forward Sachiko Kure (Bonita Vista) all contributed to the quick offense with all goals coming in the first half.

The Knights women finished with a sixth-place finish.

“The women’s team placed sixth overall in a very competitive field, probably one of our best program finishes in the last 20 years,” coach Marcos Anzures said.

Out of a field of 105 runners, Sofya Chernyak (East Village Middle College) led the City pack with a 29th place finish, and not far behind a strong showing from sophomore Yesenia Huerta ( Southwest) in 36th and freshman Isabelle Dalton (Junipero Serra) in 45th.

The next cross-country meet will be a tri-meet against Irvine Valley College and Southwestern on Oct. 15 at Balboa Park.
Knights volleyball lose to top competition
The Knights could not find the answer against Pacific Coast Athletic conference second-ranked MiraCosta College with a (9-3) loss on Oct. 1, despite a late push.

Knights volleyball (4-6) hits the halfway mark for fall with 10 games down in a 20-game season.

The Knights play their next away game Oct. 6 at 6 p.m. against conference rival Palomar Comets (4-7).