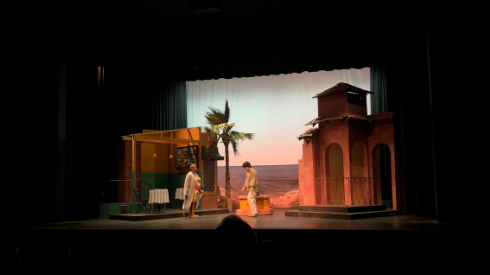 In a classic love triangle, actors incorporated humor and light-hearted fun into what normally is a dramatic and serious play. Characters transformed from the original version of their role into modern-day comedic versions.

Actors performed the original plot of  “Twelfth Night,” but with a modern twist. The characters Viola, played by Gabriela D’Amico, and her twin brother Sebastian, played by Aldo Ley, are shipwrecked in modern-day La Jolla, California.

The twins meet Orsino, whose original character was transformed into a classic California surfer by actor Parker Claudia. Orsino tries to win the heart of Olivia, now a rich valley girl played by Jamie Barker.

Viola falls for Orsino while disguised as his male employee Cesario. Orsino loves Olivia, who has rejected him and fallen in love with Cesario, who Olivia is disguised to be. While this dramatic love story played out on the stage, another storyline took the audience by surprise.

Angela Sanfilipo, who played Olivia’s drunken and mischievous aunt Toby, had the audience laughing and giggling.

Denessa Cazares delivered another hilarious portrayal of an original Shakespearean character, playing Olivia’s servant Malvolia who widely disapproves of the other members of Olivia’s household.

Originally written in 1601, this modern take of a classic dramatic work by William Shakespeare was executed well by the students of City’s drama program.

The set included a classic southern California beachfront mansion with an ocean backdrop, and another was a cute little restaurant and cafe.

Costumes took the character’s original roles in Twelfth Night and made them modern, sporting yoga pants and iPhones instead of fantastic gowns and swords. The soundtrack between scenes was also modernized, featuring artists like Lil NasX and Halsey.

Twelfth Night will have two more live performances on Nov. 5 and Nov. 6 at 7 p.m.

For future performance dates and for more information about the drama program, please click here.