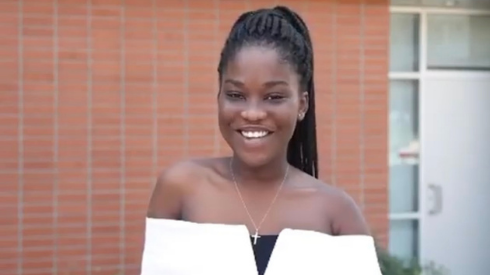 The small act of asking a question can change everything, according to San Diego City College Associated Students Government President Victoria Owusu.

“When I was coming to City College I decided to know everything,” Owusu said. “In high school, I didn’t ask much. I was always the quietest.”

Owusu, who moved here with her mother and siblings from Ghana five years ago, has spoken English her whole life, yet was often scared to do so when she transferred to Hoover High School in 2016.

“I was afraid of my accent, I just didn’t want to talk,” Owusu said. “I had people in high school that would always laugh at my accent. I had bullies who bullied me just because of my accent.”

Joining a public speaking club at Hoover eventually brought Owusu out of her shell. With the confidence she built through public speaking, she began asking questions about what was next.

“You cannot sit in one place and expect change to come to you,” Owusu said. “You have to go find it.”

During her senior year of high school, Owusu enrolled in an AP class and got to work applying for college, getting into the University of California, Merced. Ultimately, with four young siblings at home, she decided to stay local to help her mother and start at City College instead.

Having first visited City to attend a UMOJA event during her senior year of high school, Owusu remembers hearing the welcome address in her native language and feeling City would be the only community college for her.

Joining UMOJA was one of the first things she did when starting at City.

“Whenever people ask me about UMOJA,” Owusu said.,“I always say UMOJA is like a second family because as an immigrant and first-generation college student, I didn’t know anything about college when I came.”

UMOJA was a lifeline for her when she first started at City, helping her choose classes, access counseling and scholarship opportunities, and learn leadership skills.

Though a general biology major in her third year at City, Owusu began putting her leadership skills to work by joining ASG during her freshman year.

Introduced to ASG during a presentation in a Black studies class, her interest was piqued and she started going to ASG meetings every week.

Owusu was elected ASG senator her freshman year and is now serving as ASG president in her final year at City. Under her leadership, ASG has implemented several programs aimed at helping students stay healthy and engaged throughout the pandemic and beyond.

Due to student leadership conferences going virtual as a result of the pandemic, ASG was able to re-allocate travel funds to increase the number and amount of money given away in ASG scholarships. This year the 18 scholarships offered total $10,000.

In addition, ASG sent $20 gift cards to all students who had purchased a sticker in support of ASG last year, approximately 750 students total.

“$20 is a lot for people right now,” Student Affairs Coordinator and ASG advisor Lori Oldham said. “For some of our female students it’s menstrual products, it’s food. I’m really proud of them for doing that work because they really understand their students and that to better serve their students would be to put more money in their pocket, give more opportunities and more access.”

ASG is also working on their legacy project for this year — free access to menstrual products for all students at City. ASG is partnering with non-profit organization Aunt Flo to install free menstrual product dispensers in all female and non-gender bathrooms on campus.

Pre-packaged bundles of supplies to cover an entire menstrual cycle will also be available for students to take home.

Owusu plans to transfer to a UC next fall and eventually become a physician’s assistant. She’s incredibly grateful for the leadership and relationship skills she’s learned through being a part of ASG and proud for pushing herself to initially ask about joining.

“My advice to students that come to City College, go ask,” Owusu said. “We have first-year services, we have UMOJA, we have Puente … at least try to join something. Once you join one thing, you get connected to all of the different stuff on campus.”

ASG is actively seeking new members. Information about joining ASG and the programs it provides can be found here.

Meetings are held on Zoom every Monday from 3-4:30 p.m. They are open to all students and members of the public and can be accessed here.