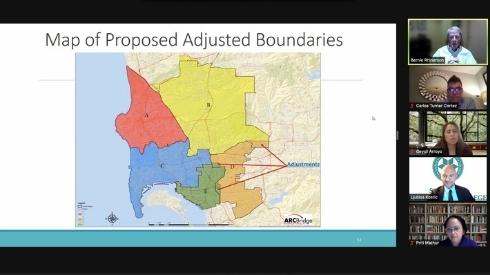 The SDCCD Board of Trustees redistricting subcommittee asked the public for input during a Zoom forum Monday evening, providing a first glimpse of its new proposed district map and an explanation of the process.

“For our district, we speak of trustee areas (also referred to as subdistricts). We have five of them, A through E,” SDCCD Director of Legal Services Ljubisa Kostic said.

The goal with any adjustment is, “to make sure that each area is representing as close to an equal number of voters as we can while at the same time making sure that we preserve communities of interest, and that we have fair and balanced voting in terms of racial, demographic and political makeup,” Kostic said.

SDCCD trustee Bernie Rhinerson, who represents Area B and is a member of the redistricting subcommittee, explained that the district overall has increased in population by approximately 10,000 people since the 2010 census. However, that growth has come disproportionately in his subdistrict, creating an imbalance.

“The charge that was given to the board subcommittee of Geysil and myself was to balance those out,” Rhinerson said.

A section of Area B south of Navajo Road in San Carlos including 11,809 San Diegans would be shifted into Area D, he said.

Geysil Arroyo, the board member who represents Area E, explained the other two shifts, which would affect her district.

With these changes the difference between the smallest and largest subdistricts would shift from 11.47% to 2.18%, bringing the districts significantly closer to equal in size, and well below the goal deviation of 10% or less, Rhinerson said.

Rhinerson also showed a chart with a breakdown of ethnicity among subdistricts. He said there are, “very small adjustments in these percentages, really less than a percent and a half, so very little change in the ethnic composition by subdistrict as a result of these changes.”

No attendees made public comments during the Monday meeting.

The public can still weigh in on these changes by submitting a comment on the SDCCD website or commenting at the next special board meeting on Dec. 6 to be held on Zoom, according to the district website.

The board will also discuss and vote on a proposal to eliminate primary elections and hold only a general election for trustees at the Dec. 6 meeting, Arroyo said.

The final chance for public comment on the proposed map will be during the board’s regular meeting on Dec. 16, before the map is finalized and submitted to the San Diego Registrar of Voters on Dec. 17, according to the district website.

A change which was previously voted upon by the board in 2019 will be implemented for the 2022 election. Starting next year, only voters in a potential trustee’s area will vote in the general election, Kostic said.

Prior to 2022, the top two vote-getters in each trustee area would participate in a citywide general election, according to the SDCCD website.

Kostic said the district is among many public agencies across the country making adjustments to reflect the 2020 census data.

Here are some of those affecting San Diego residents:

Congressional, State Senate, State Assembly and State Board of Equalization districts are drawn by the 2020 California Citizens Redistricting Commission, which has released preliminary draft maps. The CRC meets daily this week, accepts public comment, and plans to certify final maps by Dec. 27, according to its website.

County Supervisor districts are drawn by the County of San Diego Independent Redistricting Commission, which has released preliminary draft maps, and plans to finalize maps on Dec. 9. The public can participate in person, by Zoom, or by submitting eComment online, according to the IRC website.

San Diego City Council districts are drawn by the Redistricting Commission, which has released draft maps, and will meet next on Dec. 7. The public can participate by attending a meeting on Zoom, commenting online or by mail, and will vote on the final map Dec. 15, according to the City of San Diego website.