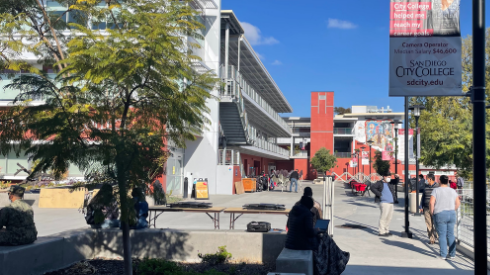 As San Diego City College staff prepared for today’s Fall Fest, at which they advertised $75,000 in student aid will be distributed in $500 increments to the first 150 eligible students to attend, a crowd of students gathered near the campus’s Schwartz Plaza.

But according to Marciano Perez, City College’s acting vice president of student services, all students who are registered and attend today’s event will receive the $500 in aid, which is being allocated from HEERF funds.

Pre-registration for the event, which closed last night, was a requirement to receive the $500. As of last night, over 700 students had registered. This could mean that the total dispersed today could reach as high as $300,000.

“When we came up with the 150, that was what our target was to get folks to the event. And now that we know we have over 700 students, anybody who has registered and attends will get the direct aid,” Perez said.

In addition to the $500 sum, City College President Ricky Shabazz tweeted on Nov. 30 that one student would be awarded $1,000.

Please join us for this event. There will be prizes, food and a resource fair. Come learn about the expanded WiFi Patio and Cafe at City College. We have expanded study spaces. Some deserving @sdcitycollege will win $1000. pic.twitter.com/846qNdgPyR

The event, the first of its kind, also includes food, games, prizes and presentations by City clubs and programs and a study jam to help students prepare for the upcoming finals.

The purpose of the festival is to focus on academics but also highlight the numerous student services and support available for students at City including DSPS, EOPS, CalWorks, counseling, mental health and more, Mena said.

“So you’re gonna see so many different programs that when working together and when the student seeks assistance from each program it’s a beautiful support network circle for the student,” Mena said.

“And of course there’s food. At City we love food. A wonderful way culturally, in my culture, to show somebody that you care for them is to feed them. Food will be available throughout the event.”

Also helping set up for the event was Nancy Martinez, a social work student at City who is also part of the CalWorks program.

Martinez says she has been grateful to be able to have part-time work through college, especially being a single mom. “It’s helped me a lot,” she said.

Perez said the means of distribution were still being worked out, but suggested City may use the application Edquity, with which they’ve partnered to distribute HEERF funds throughout the semester.

UPDATE: Hundreds of students wait in line for the much anticipated Fall Fest

As the line to enter Fall Fest, which began at the base of the staircase leading to City College’s Gorten Quad and snaked around the campus cafe steadily grew, student-run clubs and academic programs readied promotional materials under pop-up tents in Schwartz plaza.

“I’ve been here since eight in the morning,” said Aerianah Turner-Vega, a marine biology student at City College who found out about the event through the City outreach email. She said the aid would enable her to continue to attend school for another year.

“I need the money,” Turner-Vega said. “I’m going to pay off some student loan debt and use it for my credits.”

“If they could do (this) every three months I’d be happy,” she said.

But City’s last-minute decision to change course and provide the funds to all students who registered and also attend the event was a source of both relief and annoyance to awaiting students.

Some remarked that they wished they’d known sooner, as showing up early to ensure they would receive funds had been a source of great stress.

When Castellon got the email saying the first 150 students would get the aid, “what it did to us was like this sense of panic. You have to be there at 8:00 a.m. in order to get the $500,” Castellon said. “We were really nervous, stressed out.”

“But when we came here and found out that 700 people had signed up and actually we all were going to get … maybe we wouldn’t have been here so early,” she continued.

Both she and Turner-Vega said the money was a big factor in coming to the event.

“I think it was everyone’s motivation to come,” Castellon said.

Shabazz then formally announced the retirement of City Student Health Center Director Dotti Cordell. Shabazz recognized Cordell for her 20 years of service and expertise in navigating the pandemic at City. Additionally, he announced a $1000 scholarship in Cordell’s name to be given annually to a nursing student.

Shabazz also announced that Marciano Perez, who’d been serving as acting Vice President of Student Services, would take that role permanently. Perez, in turn, confirmed that the $500 aid disbursements would be distributed through the Edquity app.

City’s cafeteria, which has been closed since the COVID-19 pandemic began in March 2020, distributed free lunches to students attending the event.

“All of the departments are out here, everyone is available to speak to, you know sometimes it is hard to get a hold of people in the office,” CalWorks assistant Karla Tinti said.

Rudy Juarez, the senior media clerk at City College Library was out of breath.

“It’s been like this all day. I love this – when students get together like this,” Juarez said.

He had just finished enticing students to the library tent with swag and a raffle, explaining all the resources available at the library. “Our goal is to promote the library – for students to come in,” he said.

Beyond books, the library has loaner laptops available and can order books from Miramar or Mesa College, link students to university resources or simply provide a quiet place to study, Juarez said.

City College President Ricky Shabazz was ecstatic about the turnout for the event.

“It was amazing to see the campus as many of us remember it,” Shabazz said. “Most of the people I’ve spoken to – employees, students – are just happy to see one another.”

“I think it really was a precursor to what it’s going to be like in the spring,” he said.

Shabazz said the event was a trial run for on-campus events during the spring semester and served multiple functions that included garnering excitement for City’s academic programs, connecting students with services that help them navigate the physical and online campuses, and making students aware of the expanded Wi-Fi capabilities on campus.

“Many of our students are telling us that they need places to study, print a paper, get away from their siblings, whatever the case may be,” he said. We’re really just trying to figure out how to operate safely and healthily but to get students what they need to be successful.”

To that end, he said officials were hoping to open City’s cafe two evenings a week to accommodate students’ need for places to complete schoolwork and study.

“Hybrid education is here to stay,” Shabazz said. “But it does not mean that students don’t need to come to campus,” he continued.

“We’re at a little less than 20% in-person now, but (in spring) I’m expecting it’ll be somewhere upwards of 50% focusing on those hard-to-convert classes and faculty who are comfortable coming to classes.”

Shabazz said that the $500 in aid will be distributed through the Edquity app the campus has used to disperse prior HEERF funds to students. He said students could expect to receive an email with instructions on how to secure the funds beginning tomorrow and that City’s goal is to get students their funds by Friday, Dec. 17.