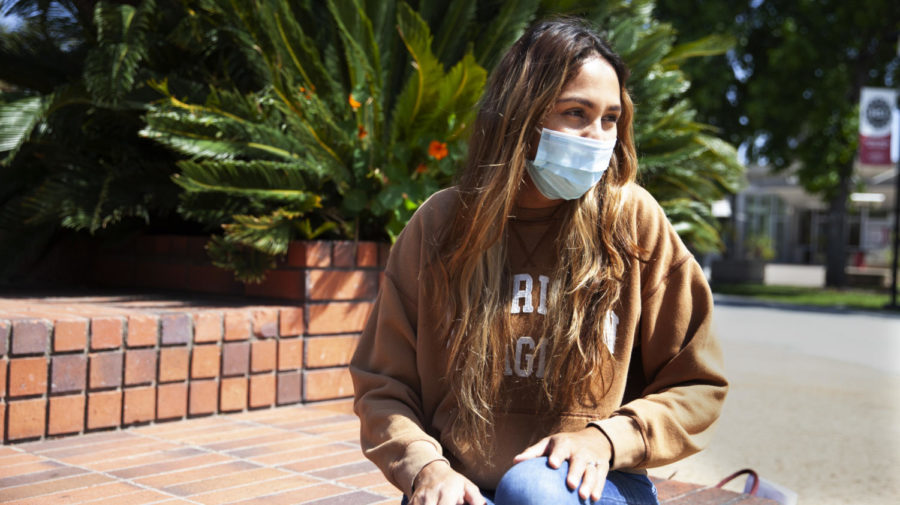 Student Maria de la Luz May, mother of two toddlers, sits in Gorton Quad at San Diego City College and recounts her struggles securing affordable and sustainable housing on April 28, 2022. May and her family lived out of a hotel room for over four months while trying to find an apartment. Photo by Philip Salata/City Times Media

Maria de la Luz May already had her bachelor’s degree in Business Administration from the Universidad Autónoma de Sinaloa in Culiacán, Mexico, when she enrolled in online classes at San Diego City College.

It was the COVID-19 lockdown, she was now living in San Diego, and in order to eventually be able to work in her field and help support her family, she committed herself to become fluent in English.

May and her husband Vince, who is also studying at City to earn his associate’s degree, were splitting rent for a house with some relatives. But because of pandemic-related layoffs, their family had to make the difficult decision to relocate to Texas earlier than they’d planned.

It was October 2021, the eviction moratorium in California had just ended, and the couple was still jobless.

May, her husband, their five-year-old son and their two-year-old daughter found themselves without a home.

They turned to the San Diego County Health and Human Services Agency and the Public Consulting Group and were provided with vouchers to move into a hotel for what turned into four months – one room for a family of four.

For May, 32, and her husband, 35, this was just the beginning of negotiating the myriad services, programs, and agencies that exist in San Diego to support individuals facing housing hardship.

Despite the numerous services offered, the process of navigating them can often create barriers to accessing resources, which impacts individuals and families who are already facing adversity.

At first the hotel vouchers were a relief for May.

“When we heard that, we felt relaxed and we started searching for houses,” May said. “We (told ourselves) okay, everything is going to be okay.”

They also came across a program called “Welcome Home, City,” an initiative funded by the California Community Colleges Chancellor’s Office. The program was part of the College Homeless and Housing Insecure Pilot Program, launched in 2019 and funded through a $9 million allocation distributed among 14 community colleges throughout the state.

San Diego City College was one of those schools, and received $600,000 annually for three years to design and run a program best suited to its community.

Colleges throughout the state each took a different approach.

City, instead, chose to create a comprehensive approach that includes a case management component to assess the varied needs a student may have. According to Marciano Perez, vice president of student services, students who are experiencing housing hardship often are facing other difficulties as well, so City created a program meant to guide them to all the relevant resources.

Case managers get an overall view of the student’s situation and then are able to determine the services best suited for them, such as help with securing housing or applying for other types of funding.

WHC is currently a five-person enterprise. According to WHC’s housing navigator Marco Circosta, the team includes two case managers, a program assistant, a branch manager and himself.

Perez said City’s program has received praise from the state chancellor’s office, and though funding is yet to be slated for its continuation, Perez expects to be able to continue services in some form after this third and final year.

The Mays filed a basic needs assessment with WHC in November 2021.

All from a hotel room

In the meantime, May and her husband started to look for housing. But landing an apartment required proof of income, sometimes up to four pay stubs that would cover at least three to four times the rent.

That meant that even when they found employment, they would have to sustain their situation for several months in order to build up the needed financial history to be considered for tenantship.

Her husband found a job at Amazon, but it wasn’t full-time and therefore wouldn’t satisfy their proof of income needs. But then, he was hired at the United States Postal Service.

Meanwhile, May kept studying, raising her kids and searching for houses – all out of a hotel room.

“If I wanted to concentrate, or participate (in class), I would have to stay in the bathroom,” May said. “That was a hard time. Sometimes I had to decide if I had to do my homework or search for houses.”

And then time ran out. Their vouchers dried up and they found themselves with a $3,500 bill for their stay.

It was around that time, Feb. 14, 2022, that May was contacted by Marco Circosta, WHC’s housing navigator.

Circosta is an employee of PATH San Diego, a local chapter of a statewide advocacy and aid organization with branches in over 150 cities. PATH provides supportive services to individuals struggling with housing insecurity and homelessness.

City College is a campus servicing over 13,000 students with varying needs, in a district in which 59 percent of its students have reported experiencing housing instability, according to a 2020 survey by The Hope Center.

According to John Parker, vice president of administrative services at City, the need to address housing insecurity is a priority.

Parker links the importance of allocating resources to housing-related services as a means of “helping support our students in their academic journey, to ensure they not only persist but graduate and transfer,” he said in an interview with City Times on April 15.

Parker was referring to the ongoing planning of an affordable housing unit for students and employees to be built on the lot of the former Child Development Center. The building would potentially house over 600 City-affiliated individuals. According to Parker, priority access will be given to low-income students.

“We expect to start (the project) within the next two or three years, shovels in the ground, and in terms of completing the project it could take up to 18 months,” Parker said in an interview with CTTV’s Inside City on April 22.

May expressed her overwhelming support for the plan.

“Many students are facing the same problem,” May said in Spanish, “or might in the future, because it’s very expensive.

”If you don’t have a house, your family can’t be well, and so you can’t be well either, and then you are unable to work or concentrate on your schooling.”

As important as this solution might be in the future, WHC is one of the key organizations on campus created to help confront the issues of housing insecurity that students are facing in the present. And that means connecting students with existing, though limited, resources.

And as the housing navigator at WHC, that is Circosta’s role.

“We don’t have any kind of special in for housing,” Circosta said. “This is all private market housing that we’re really trying to look into. So income, credit, their rental history, all these things are going to be important, and challenging factors to work around, depending on the student’s situation.”

When Circosta is not in the office, one of his roles is to create relationships with local property owners and incentivize them to rent to his clients. WHC will pay a double security deposit as a contingency fund to persuade a landlord to rent to one of WHC’s participants.

But even that effort, Circosta said, seems to carry less influence since the COVID-19 pandemic hit. He said landlords tend to value renters with more stable incomes as a reaction to the instability of the rental market. So landlords scrutinize applications and are deterred by renters who have experienced any difficulties in the past.

“An eviction is immediate disqualification from being accepted,” Circosta said.

When May finally heard from Circosta in February, just as her situation was becoming ever more critical, it was a breath of relief. Though it was months after her initial assessment process, Circosta soon was sending her lists of apartments.

Being enrolled at City gave May access to a variety of resources the college provides, especially as the campus began re-opening. May was linked with a work-study job at the Child Development Center.

The job was particularly helpful, not only for financial reasons but also because she found the schedule flexibility she needed to sustain her education while raising her two children.

Meanwhile, KPBS was covering the approval of state funding for a planning grant for the affordable housing complex, news that City Times published days earlier. May was featured in the station’s report as an example of a student experiencing homelessness and was mistakenly described as studying at the Childhood Development Center.

Communication between Circosta and May continued fluidly over the next weeks, until finally on March 15, he emailed May information about an apartment that looked to be a match.

Still living out of a hotel, May quickly forwarded Circosta the needed documents to be sent to the landlord.

Excited about the prospects of a new home, she went to see the property, which was located within walking distance of campus in Banker’s Hill. She halted her own search and waited in anticipation of what to her seemed like the next step – news about closing the deal. On March 22, she wrote Circosta inquiring about the apartment but did not receive an answer.

She didn’t hear back regarding her case until April 11, after City Times requested an interview with a student experiencing housing hardship. In response to that request from City Times, WHC reached out to May, who then was able to inquire about the status of her case.

But at that point, given the gap in communication with WHC, May had already moved on to continue her search privately. And May was not reassured by Circosta’s apology.

“I think I kind of wasted my time with him,” May said, referring to Circosta.

“I understand the students’ frustration,” Circosta said when asked to comment on May’s case by City Times. “The system, in general, is so hard to navigate. Things can at times feel very siloed. And when you’re looking for private market housing, it’s generally a frustrating environment to work in.”

Perez said that May’s case illuminates some of the challenges WHC faces. Describing examples of past successes in matching students with a home, he underlined securing housing for a student with a family is a different situation altogether.

“You’re not going to put a whole family in a room in a house,” Perez said. “That’s really the challenge, and why I think this program is so important in having a case management component and a housing navigator component.”

Still, in a situation like May’s, timely communication can be a critical factor.

Luckily, temporary relief did come to May and her family. They landed a studio in El Cajon, and the same organization that helped her with the hotel vouchers paid for the deposit and first month’s rent.

May said they finally feel more comfortable because they no longer have to move from hotel to hotel. Still, it’s a tight fit – and a long drive. Nevertheless, they took a six-month lease and continue to search for better options.

Most recently May learned her application for a housing lottery through the Metropolitan Area Advisory Committee on Anti-Poverty, or MAAC, had been selected. She heard about MAAC from co-workers at the Child Development Center and was encouraged to apply.

With the news, prospects for May, at least for now, are looking up. Despite the hardships of housing insecurity, May has stuck to her studies. She admitted that, if she and her husband had stopped studying, they could have found a stable situation more quickly.

“But we knew that would be a mistake,” May said, “because if we keep studying, in the future we will be able to make a better life.”