SoccerCity, SDSU West set to battle at the ballot

The fight over the Mission Valley stadium site land will be before voters on Nov. 6 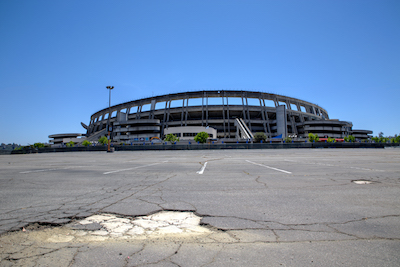 Having lost both the Chargers and the Padres, the former Jack Murphy Stadium has been abandoned by all major league sports, May 3, 2017. Soccer City San Diego has proposed a bid to redevelop the site to host a smaller stadium for a Major League Soccer expansion franchise. Alan Hickey file photo.

Correction: A quote attributed to Jack McGrory was misidentified in earlier editions. It should have been attributed to Laura Fink, a political consultant for SDSU West. City Times recognizes the error and apologizes to readers.

Something beautiful may develop at the Mission Valley stadium site, but competition over dueling proposals on the November ballot has gotten ugly.

On one side is SoccerCity and Measure E, which is selling a plan to transform that landscape into a sprawling business district with a new stadium for an MLS soccer team, featuring entertainment, modern living, recreational fields, a river park and even space for SDSU expansion.

On the other, SDSU West and Measure G, which promises to make SDSU a cutting-edge research facility that would grow funding and reputation, build housing, develop retail, allow for a river park, and give Aztec football a new home.

Opposition to the other’s plan has damaged both proposals’ credibility. City Times described one debate, held during Voice of San Diego’s Politifest earlier this month, as a verbal wrestling match.

Nick Stone called the stadium site the biggest parking lot west of the Mississippi at Politifest. But the picture painted by SoccerCity is not guaranteed if Measure E passes.

According to the analysis by City Attorney Mara Elliott of Measure E, “voter approval does not guarantee that any specific development will be built or that a professional soccer team would come to San Diego.”

Lease terms would be set in a private deal between Mayor Kevin Faulconer and investors.

Measure E passing changes a law requiring a public hearing, city council approval and review under the California Environmental Quality Act, which could set a dangerous precedent at a site that contains significant underground contamination.

SoccerCity could also skirt a voter approval requirement for selling land, through an option to purchase 79.9 acres.

The privately funded SoccerCity plan promises to bring the city millions of dollars in property taxes, but according to the fiscal impact analysis, city expenditures to provide services to the property could offset most of those gains.

Measure G sells a vitally needed campus of the future narrative that wouldn’t be possible under Measure E.

If Measure G receives a higher majority of the vote, 132 acres will be sold to California State University. An approved campus plan will require CEQA review, but it’s unclear how development of the new campus would be funded.

Critics also argue a public institution would not generate property tax revenues that could benefit K-12 education, although SDSU would provide greater access to higher education and fill future job demands according to supporters.

Such trade-offs are difficult to quantify, but without a clear funding plan or a completion timeframe, SDSU West lacks a clear picture.

Laura Fink, a political consultant for SDSU West, said it comes down to trust: “Do you trust in a public institution that’s been part of San Diego for over 100 years or private investors looking to profit?”

Nov. 1, 2:55 p.m.: Corrected the attribution of the Jack McGrory quote to Laura Fink.