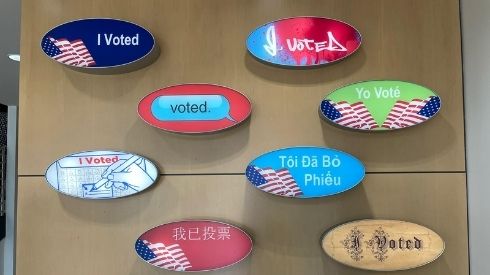 Presentation of "I Voted" stickers written multiple languages that are available at polling stations. Photo by Ingrid Estrella/City Times Media

The last day to cast a vote in the 2021 California gubernatorial recall election is here and San Diegans are turning out in large numbers to make their voices heard.

San Diego City College food service staff member Joan Holloway said she felt frustration over the recall process, but added that the only way to make change is to vote.

“If we really don’t want Gavin Newsom as governor anymore, he can be voted out in the next election,” Holloway said. “The last election debacle we had, a lot of people didn’t vote. They didn’t think it was important and we wound up with a president that didn’t give a shit about this country.”

Here are some other thoughts shared.

“It’s your community and if you want to claim it and be involved there is no better way than to vote.”
-Jazmin Aceves, 20, Clinical Social Work major

“It’s very important to vote. It’s our civic duty. It’s a right that my ancestors died to give us. So I don’t accept any excuses. it makes a big difference — get out and vote.”
-Lisa Lloyd, 59, Conflict Resolution major

“It is important for everybody to vote no matter which way you’re voting. If you don’t vote, you don’t have a right to complain. I’m hoping that we can turn the direction of the state around in every way. I’d like to see the quality of people’s lives to be better, I’d like to see less homelessness, I’d like to see better management.”
-Mary Hunt, 52, Property Manager

“I think it is pretty important to vote. There’s a lot more a stake than just COVID-19 restrictions and people being upset about COVID. It’s more than that, we saw what is going on in Texas and I support a person’s right to choose what they do with their own body. I think it is going to be a lot closer than people think.”
-Richard Rodriguez, 33, Unemployed