Restaurant owner taps his network for help to survive pandemic 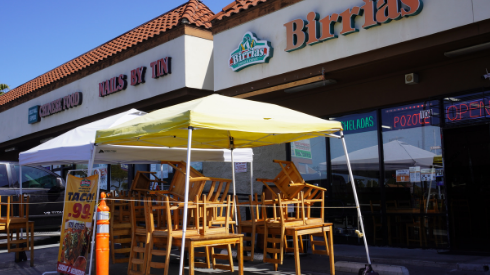 Birrias, Chivos & Cheves owner Arturo Ruelas had to find new ways to accommodate his customers during the pandemic, setting up two tents and tables outside in the parking lot. Photo by Gabriel Schneider/City Times Media

In a small shopping center where Highland Avenue connects with 24th street in National City, a Mexican restaurant called Birrias, Chivos & Cheves stands between a pizzeria and a nail salon.

Even with the sun already warm on a weekday morning, the smell of coffee was in the air. A server wearing a mask wiped down tables and set up for breakfast service, and the cook drank coffee nearby.

Memorabilia from Tijuana’s Plaza de Toros and images of revolutionaries decorated the walls, while the front counter had Mexican candy for sale next to the cash register.

Owner Arturo Ruelas arrived just as the restaurant was opening with groceries in bags. Later, he explained how he had to adhere to state and county rules in order to stay open during the pandemic.

At first, takeout only. Later, customers needed to eat outside at tables set-up on a makeshift patio in the parking lot. The expensive tent he purchased to protect those customers from sun and wind blew over in bad weather and was damaged. Masks were mandated.

Complicating his situation more, Ruelas said, was when the pandemic first started, he lost all of his employees. The restaurant hours also changed causing a lot of money loss.

“We were suffering right when (the pandemic) started,” he said in Spanish. “Some employees went on unemployment, others didn’t want to keep working. I was left without any workers. I was working as the cook, the server, everything, cashier. Everything.”

Ruelas explained that he received some help from city officials, but only because he went looking for it.

He described how he reached out to Ron Morrison, a National City councilman he knew through the city’s Chamber of Commerce.

“Thank God we have good friends there,” Ruelas said. “We have had a lot of support from him.”

He believed that if he hadn’t gotten that help, he would have lost his business.

Ruelas said social media also helped a lot with keeping his restaurant open. One video, of him making a row of micheladas, has over 12,000 views.

Even with all the challenges, Birrias, Chivos & Cheves won the award for best Mexican restaurant in National City again in March.

This story is part of The Highland Avenue Project and the Democracy and the Informed Citizen Emerging Journalist Fellowship program.