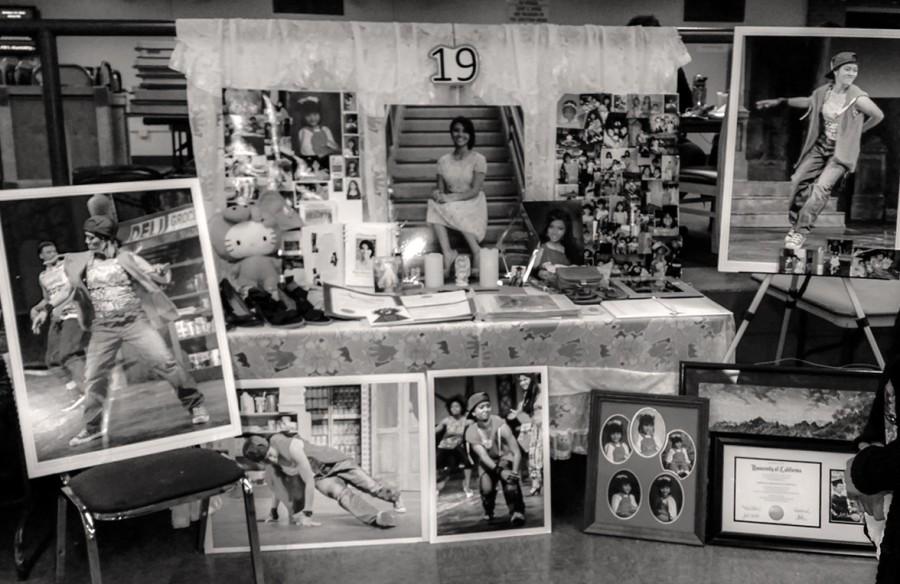 An altar was set up in memory of Bernadette Ondevilla at the Day of the Dead Festival on campus in October. (Photo courtesy of Nilo Ondevilla)

Norbert, a category three hurricane, had just swirled off the Pacific coast of Southern Baja the day before and was expected to cause up to 6-foot swells and dangerous riptides. An advisory was in effect along the southern beaches of San Diego County the day Christine “Bernadette” Ondevilla decided to end her silent pain.

Nilo and Trinidad Ondevilla were awakened by an early morning knock on the door at 4 a.m. Sept 6. “I was still in bed,” Nilo Ondevilla said. “My wife answered the door. I just remembered a loud wailing cry and I jumped out of bed and I knew as soon as I saw the medical examiner’s badge.”

A medical examiner and CHP officer carefully broke the news to them that their daughter Bernadette had been pulled from the balmy waters by Harbor Police near the Coronado Bridge at 3:10 a.m. The medical examiner officially ruled the manner of death a suicide.

Bernadette had graduated from UCSD in 2013 with a major in psychology. “She wanted to perfect her dance choreography after graduation and enrolled at San Diego City College,” Nilo Ondevilla said.

“She loved to dance, which is the dream of every dance teacher, to have students as passionate about the work as somebody who has had a full career of it and not approaching it half-ass but really going after it,” said Terry Wilson, City College dance instructor.

Bernadette was dedicated to her dance career and was actively taking classes, teaching, performing in dance troupes and creating choreography at City.

She was a hip-hop dancer at heart but looking to fuse this genre with modern dance.

It’s still very shocking to me, I would not have seen it coming,” Wilson said. “I would have predicted a very strong career for her as a great teacher and performer, and being a teacher was her passion.”

Both Wilson and Nilo Ondevilla agree that she took a lot on as a caretaker for her family and had too much on her plate last semester.

“I try to tell my students that you don’t have to figure to everything out,” Wilson added. “Young people want answers and life isn’t like that, and I’m trying to teach my students to manage their daily stress. What get’s me is that everybody on Facebook appears happy, which is totally false.”

“I remember the last time I saw her; she was waiting for me under the large tree in front of City College on Park Boulevard, sipping a vanilla chocolate shake and fries, her favorite,” her father said.

Ondevilla makes it point every day after he finishes classes at San Diego City College to sit underneath the tree and remember his daughter.

“Bernadette, the oldest of four siblings, was always thoughtful about saving her money to buy nice things like a Gucci bag for her favorite aunt or her sister,” he said. “She was the oldest and wanted to take care of everybody.”

A Look at the Numbers

In 2012, 40,600 suicides werereported in the U.S. According to the American Foundation for Suicide Prevention and the Centers for Disease Control, death by suicide is the 10th leading causeof death for Americans. In that year, someone in the country died by suicide every 12.9 minutes.

Based on current trends, the World Health Organization predicts that, by 2020, about 1.5 million people will die from suicide. Ten to 20 times more people will attempt suicide worldwide. This translates to an average of one death every 20 seconds and one attempt every one to two seconds.

Last year, there were a total of 41 suicides (ages 12–95 years) in San Diego County, the highest since 1995, according to San Diego Health Improvement Partners.

The Start of a New Mission

Since the death of his daughter, Ondevilla has begun a quest to prevent more suicide deaths at the Coronado Bridge and plans to begin working with other nonprofit groups in town. He plans on working with the local chapter of the American Foundation for Suicide Prevention. Another potential ally is U.S. Rep. Scott Peters (D-San Diego).

Recently, the city of San Francisco approved a resolution to begin construction of a steel cable net on the Golden Gate Bridge within three years at a cost of $76 million.

The Coronado Bridge was San Diego’s pride and joy when it opened to the public on Aug. 3, 1969, and is often considered a magnificent structural conquest of the San Diego Bay. The bridge has approximately 200 feet of vertical clearance for tall ships and offers a picturesque 80-degree curved view toward San Diego.

The Coronado Bridge is one of four bridges in the United States considered a “suicide bridge” by comparing them to otherbridges, according to a Voice of San Diego report.

More recently, there have beendiscussions of installing a netting on the bridge. In the past, the problem has been documented extensively; Caltrans, the city of Coronado, San Diego County and community advocates have supported the effort to install a barrier on the bridge.

According to a WHO 2002 study, more than 90 percent of people who attempted suicide had a mental illness at the time of their death. However, such disorders had often not been diagnosed or treated. About one-third of people who took their lives did not tell anyone of their plan. The warning signs are often missed because of myths surrounding suicide, according to the nonprofit Suicide.org.

Bernadette was involved in a car accident in which the car was totaled and she walked away without any significant injuries except for a slight concussion caused by a deployed airbag, according to her father. Ondevilla said he feels that this is when he noticed some subtle changes in her personality.

“For one, she didn’t want to return to Culture Shock dance studio where she was part of a dance troupe and mentioned to her mother that she no longer wanted to dance, and her mother found this shocking,” Ondevilla said. “She was so passionate about dancing.” It’s not certain, but what followed next was a break-up with her boyfriend, according to her father.

“We didn’t think nothing of it until her mom asked her one day: what percentage of your depression is being caused by your broken relationship?” Ondevilla recalled. “She replied about 20 percent.”

Unbeknownst to her family, her close circle of friends, mentors and colleagues knew of her troubles.

“I was helping Bernadette to drive again over the summer,” said Melissa Aldo, Mesa College dance teacher and mentor to Bernadette. “She had this quiet strength about her and she had a lot of support from friends and colleagues — they were there for her,” she said.

Bernadette’s other dance teacher/mentor and friend, Angel Villalobos, said that she was having a difficult time juggling work and career. “She had such a beautiful spirit and I don’t think everybody knew that,” Villalobos said.

According Ondevilla, Bernadette had been seen before at UCSD’s mental health services for some mild depression and what might have been a mild form of PTSD, in his opinion, after the car accident in February; she was afraid to drive again.

Since his daughter’s death, Ondevilla has found support and comfort from fellow students in his classes at City College who have come forward with their stories of attempted suicides and depression.

A Search For Answers

Ondevilla said he has found peace in reaching out and is energized to start his campaign called Operation B Fence (OBF) to prevent more bridge suicides and raise awareness.

Once the campaign starts rolling, Ondevilla plans on organizing a 5K run on Aug. 30, Bernadette’s birthday.

“I have questions that need answers before I can have closure, and my family, too,” he said. “I want to know where she was after she left work between 6 p.m. and 2:30 a.m. All that time she was unaccounted for. I want to talk with the CHP officer who last saw her before she jumped.”

“This is what Bernadette would have wanted me to do,” Ondevilla said of his search for answers and push for prevention. “The problem of suicide is a much larger problem; we have to start somewhere.”