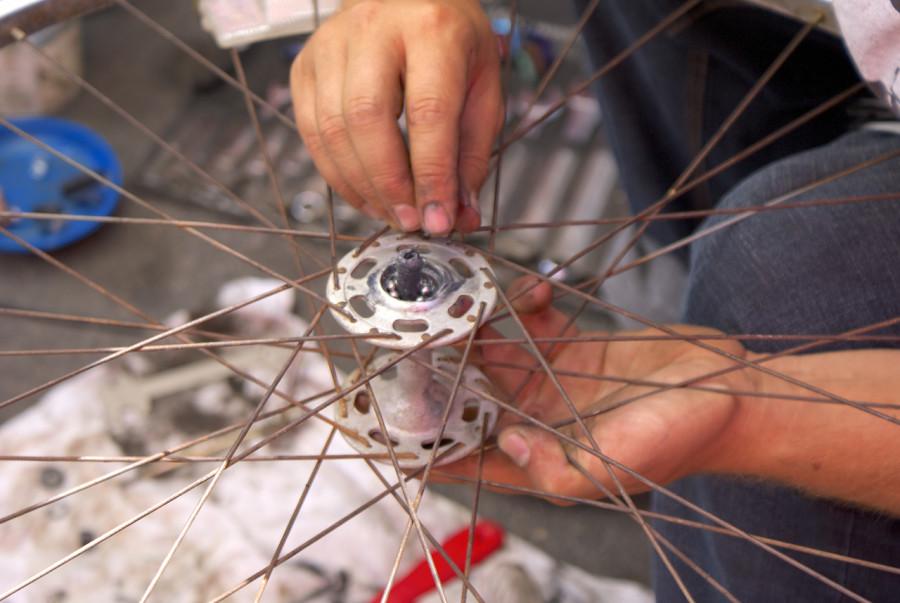 A visitor at the Bikes del Pueblo tent of the City Heights Farmers Market changes the bearings in the axle of a wheel from his bike with help and guidance from volunteers on April 18. Photo credit: Torrey Spoerer

Alfredo originally bought his vintage Raleigh road bicycle for only $5, but he has also spent $300 over the past three years on repairs and maintenance.

$100 per year on an outdated vintage ride, however, is still probably cheaper than if Alfredo had solely relied on a private bike shop to order rare new-quality parts and then install them onto the bicycle for him.

He found out about Bikes del Pueblo, a local nonprofit bicyclist cooperative “bike kitchen” a year ago through some of the mechanics at Pedal Pushing, a small bike repair and wholesale storefront located on El Cajon Boulevard (also in City Heights).

California is home to more community bike shops than any other state, while Bikes del Pueblo is the only bike kitchen in all of San Diego, according to the coalition.

Every Saturday from 9 a.m to 1 p.m, co-op volunteers set up a mini-shop-style tent at the City Heights Farmers Market, located on Wightman Street between Fairmount Avenue and 43rd Street, and assist market visitors through the process fixing their own bikes.

Anyone can bring their bike to the tent and have access to a fully stocked tool kit and a few mechanic mentors for any donation amount possible, small or big, for using the facilities and mentoring.

Since then, Alfredo’s been coming to the open tent one Saturday or so every four months for help and tips with the repairs that his bike occasionally needs.

Visitors are of a various range from more frequent bike riders tuning or fixing their road bikes to kids fixing a flat on their BMX bike or beach cruiser.

Two of the BDP mechanics, Vi Nguyen and Leah Shoemaker, are first-year San Diego City College students. They started volunteering for BDP around a year ago through mutual friends who were also volunteers at that time.

“We’re kind of trying to put together our own sense of a timeline,” Nguyen says.

Bikes del Pueblo is also stocked with various salvaged secondhand bicycle parts and components such as wheels, frames and forks, handlebars, gears and so forth. Many of the usable parts can be purchased for roughly low estimated costs that go straight back into the co-op’s operating funds.

However, the garage itself is not open to the public. Visitors can let a volunteer at the open kitchen know if they have a part or bike in mind and the volunteers will grab it for them. If anyone cannot make Saturdays from 9 a.m. to 1 p.m., they can contact the co-op via email.

The BDP garage was moved from the garage at Snowdrop to the basement of the Coven, both co-op houses in City Heights, in late 2012 and has continued to operate out of that basement since then.

The co-op also occasionally partakes in donation drives along with other nonprofit forces, such as in their most recent holiday drive back in late March for helmets, lights and u-locks to donate to the local welfare youths via Pro Kids, a nonprofit golfing and recreational activities organization for underprivileged youths, along with a bike safety workshop.

Unfortunately, in part due to the limit of labor and energy, growth has been “kind of hard to count,” according to Nguyen. “A lot of times, like when applying for grants, they want to know what your impact is on the community. And we have like almost no way of measuring that. We rarely ever collect much of that info, like how many people we have and how much labor we’re putting in, we don’t really keep track of that very well.”

Without these grants and similar financial resources, their dream goal of opening a nonprofit storefront in City Heights isn’t looking possible just yet.

“Between the amount of volunteers we have, it’s just all that energy just to put on the market, put on the build decks here and such,” Nguyen explains.

There’s also the matter of maintaining the workshop’s “safe space” policy, which includes the available preference of respecting a level of reserved anonymity via first name basis if the visitor desires such.

“I don’t want to make people feel like they’re in a government office, where we’re asking all of them for address and everything just so they can fix their bike,” Nguyen says.

In recent time, bike visibility in San Diego has slowly but steadily increased. Some most recent examples include new designated bike lanes on Fourth Avenue and Fifth Avenue through Bankers Hill, and the new presence of rental bike stations throughout Downtown, Hillcrest and North Park called Deco Bikes.

The rental bikes, however, require a credit or debit card and charge a minimum rate of $5 for just 30 minutes, twice as much as a one-way fare on a transit system bus or trolley.

“Personally, with Deco Bikes, I think it’s good for bike visibility in SD, but it’s also not an answer to an issue of transportation and accessibility, because they’re sort of aimed towards mostly tourists, and folks that might not have space in their condo for a bike — It’s aimed towards a certain demographic,” Shoemaker explains. “We need more accessible resources in San Diego as far as bikes and transportation goes.”

Despite limited resources and a frequently rotating volunteer body, the do-it-yourself ethic that fuels the co-op’s motto of autonomy has kept it going strong.

“I kind of see it as like it’s not so much like I’m doing it because people need the help, but because it should just be around,” Shoemaker explains. “I think it’s based off sort of my own ethics. We need free resources or low-cost resources to be sustainable.”

“It’s great to be able to work on something and fix it up without having to be dependent on a bike shop or like being able to not spend your whole paycheck on getting around,” Shoemaker says. “You’re able to just get yourself somewhere just by the power of your legs pretty much, and mechanics are fairly easy to learn.”

No matter who comes to the kitchen for help, or who comes and goes through the volunteer body, the motto of autonomy will always remain core to the kitchen’s character and spirit: they won’t do it for you, but they’ll show you how it’s done and provide a community toolbox so you can do it yourself.

For more information, visit the group’s website at http://bikesdelpueblo.blogspot.com.