The Architect of the Dream 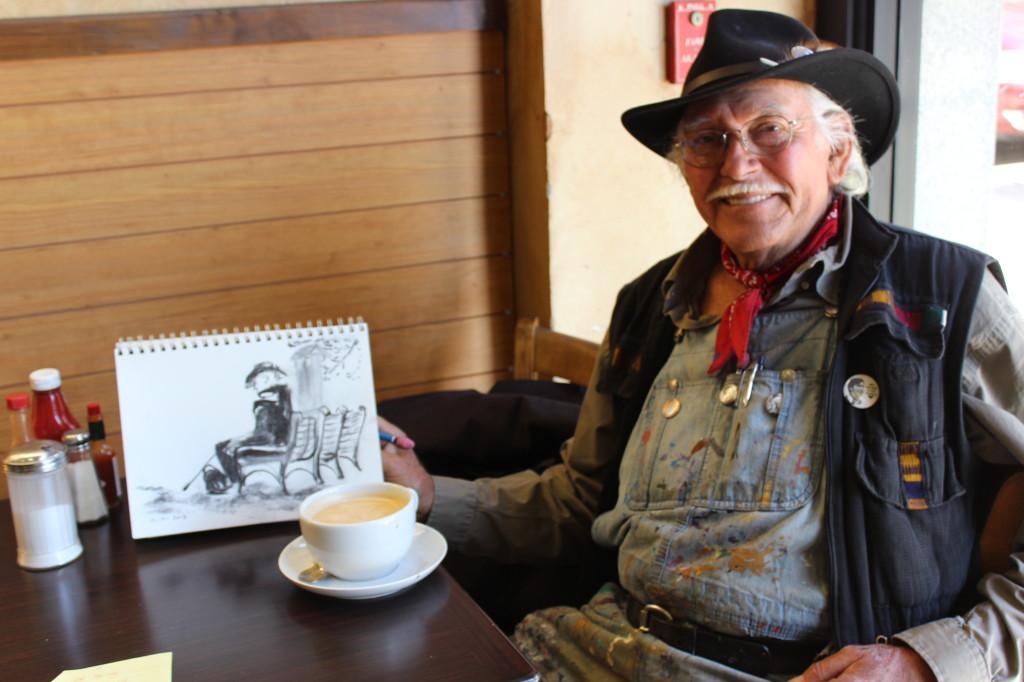 Everyone can think about or plan something for the future. As a matter of fact, most people do it constantly, but it takes more than that to become a true visionary and see beyond what the rest can see. It takes someone who is creative and capable of taking their vision and with courage, self-discipline, gentleness and patience make it a reality. Salvador Torres is a perfect example of a true visionary.

Torres is a Chicano artist, born in El Barrio del Diablo in El Paso, Texas, on July 3, 1936. He is one of those few people who have a charismatic and contagious smile that can easily get you inspired when you hear him speak. As a young child in 1942, he moved to San Diego with his family and settled in Logan Heights, with the main industry of the area being the canneries, where his parents worked.

Torres wanted to pursue his passion as an artist, and had a plan to put it to use with discipline and perseverance. A few years later, Torres earned a scholarship to the California College of the Arts in Oakland, where he continued his education. There, he met other Chicano artists and soon they began thinking about returning to their homes, both to develop their art and serve their communities.

Once Torres returned to San Diego, around the time that the Coronado Bridge was being built, Torres found out that his house had been destroyed.

“When the freeway and the bridge were instituted by planners of the San Diego city department of planning and California state planners, they decided to send this freeway right through the heart of our community … and we had friends across the street, restaurants, drugstores. It was a great community … everything was smashed, we saw our homes and the feeling was bad, that you couldn’t visit your friend, and even my house was torn down and a big pillar was put right there. So this feeling of destruction in your own neighborhood is something that I really feel very deeply about,” Torres said.

For a long time, the community of Logan Heights demanded a park, but the City Council didn’t seem to listen, until 1969, when the community was promised a park as a compensation for the loss of many homes and businesses that were torn down to give place to the construction of the freeway and the bridge. Two months before the opening of Coronado Bridge, an area was designated and a park officially approved, but nothing seemed to be getting done. On April 22, 1970, the community noticed bulldozers around the area that had been designated to be their park, but no park was intended to be built at that time.

Instead, the area was going to be transformed into a Highway Patrol parking lot. Soon, members of the community and the San Diego City College student body went to the area, took it over, and fought the bulldozers to start what today is Chicano Park. The construction of the parking lot was called off, and for days community members and city officials held meetings to negotiate the creation of the park. In one of those meetings an artist shared his vision of adorning the freeway pylons with art and make the park a beautiful place. The architect of the dream, Salvador Roberto Torres, advocated his vision.

The very same day of the take over, people started Chicano Park, little by little. “Chicano Park was established by the students … they walked out of San Diego High School, they walked out of City College, they walked out of Memorial, they walked out of Grammar School, to create the park. It was the students, it was the nameless students that felt that they need it a park … so, when we decided to build a park, [we were told] no, we don’t have no funds for you to build a park … we said, okay, we’ll build our own recreation, we’ll have tires, and we’ll have wooden things there, and they saw that we were serious … and so right away they started raising money for the this and that for the park, a bathroom, (which is still not right), and then children play areas,” Torres said. Finally, a few months after the takeover, a budget was allocated for the development of the land.

Torres did not let the freeway nor bridge intimidate him. Instead, he saw an opportunity to do something remarkable.

“You have to discipline yourself, and that’s what is all about, this is what we were doing in the Chicano movement, we had self-determination, we moved towards making a park … we did things because we were self-determined, we were determined to do something even though we had all of this prejudice, the police were on top of us, I got arrested six times during our movement … this is what is all about,” Torres said.

It took brave artists, students and community members with strong ideals to help create Chicano Park, and Torres is one of the bravest of them. The Chicano artists didn’t start painting murals until 1973, and may not ever have were it not for Torres visiting the Poliforo Cultural Center in Mexico City in 1962. There, he drenched himself with art and was amazed to see what the Mexican muralists were experimenting with.

“Painting murals is a true responsibility to the public, you want to lift the public up, you want to educate the masses … that is what real mural painting is all about,” Torres said.

While Torres was there, he started seeing similarities in the structures that the muralists down in Mexico were working with and saw things that could be done in Chicano Park. He came back to San Diego with new ideas to share.

The Chicano artists started finding ways to raise money so that they could buy materials to prepare the columns and start painting, inviting more artists from other organizations to work with them. Soon, the area slowly became a real park.

“We worked hard, we dedicated ourselves, nobody paid us a dime to create this monumental piece. Now this piece is historical, now the murals are a historical monument of the United States of America … we did it because we love, we did it because we wanted to see something beautiful, and now we have it,” Torres said.

If you have been to Chicano Park, most likely you have already seen murals painted by Torres. They are imposing murals filled with color and symbolism, pieces of art that require passion, hard work and creativity that utilized what was accessible.

Torres has the ability to step back and use mirrors to reflect sunlight, cast the light on a column and move it around to preview the movements of the brush. It’s a clever thing to do…but sometimes he would get in trouble for doing it. Some people don’t always understand an artist, and those same people would call the police on him, who would then confiscate his mirrors.

The life of an artist can be full with difficulties and rewards. “I’m currently restoring a mural that’s 25-feet high and it’s 380-feet long, and I fell off the scaffold the other day, and I cut my face … and I have five stitches across my face; and then you have to work, and then you have to get away to look at it because is so big. So I was looking at it and a car came and ran me down, so these are the hazards of the job, so you have to really be alert,” Torres said.

Torres is a strong man, and a true visionary with a humble and sincere personality. After he told the story, he was asked to say how old he is, and he said, ” 77… Yes! I’m 77, and I feel so good.”