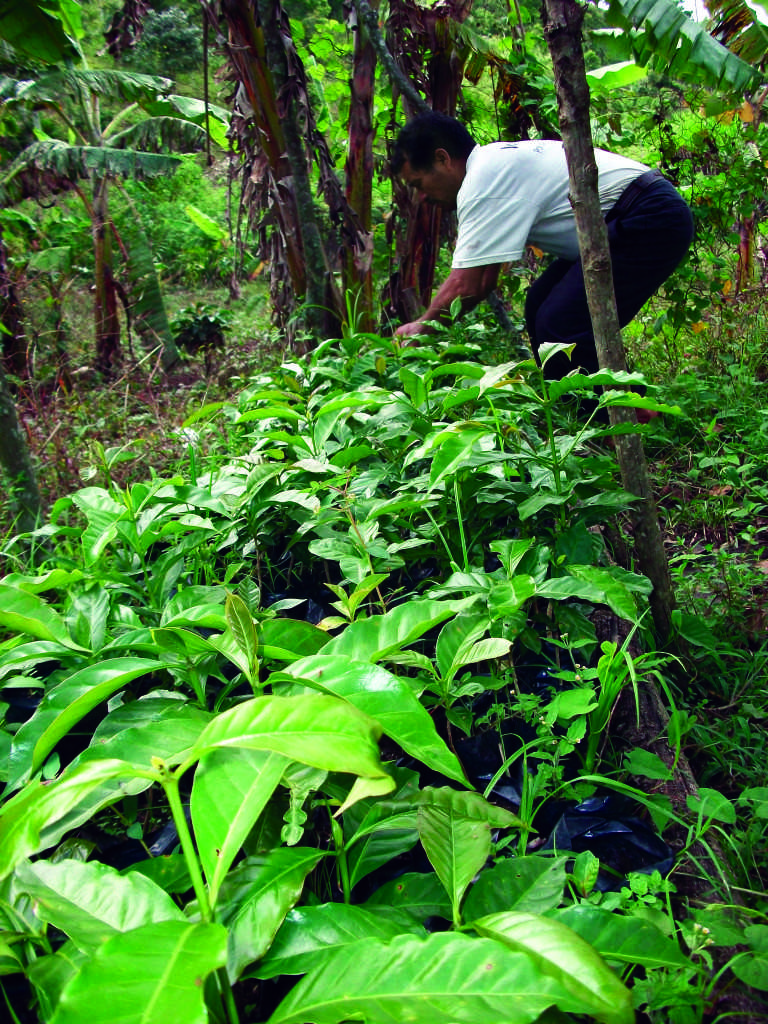 A worker tends to coffee plants at the Maya Vinic Cooperative in Acteal, Chiapas, Mexico in August 2011. Photo courtesy of David Schmidt.

Many students perform the daily ritual of drinking a cup of coffee at our cafeteria; what we don’t know is what is behind that much needed, energizing drink. Farmers and workers around the world are not justly compensated for the labor they do.

In the following interview, experts on this topic and members of the club CAFÉ and Fair Trade proponents David Schmidt, Professor Enrique Davalos and Irma Cordova and Café Virtuoso representative Rigoberto Hernandez, talk about the importance of this campaign and why students should consume fair trade coffee.This is an interview with David Schmidt, Prof. Enrique Davalos and Irma Cordova, members of CAFÉ.

Sandra Galindo: “Why are you worrying so much for the consumption of coffee?”

David Schmidt: “Coffee is one of the world’s products that are grown almost exclusively in the Third World, and most of it consumed by people in the First World. (Bananas and cocoa – chocolate are on that list, too.) And it’s often grown in horrible conditions. Up here in the mountains of Chiapas, most coffee farmers cultivate their own small plots of land that [they] have run in their families for generations. If they aren’t part of any organization or co-op, they’re at the mercy of the intermediary buyers who buy from these small producers and sell to the big corporations—Nestle, Starbucks and the like.

“The goal of these intermediaries is to screw the coffee farmer out of as much money as they can, and keep him in a precarious position of dependence. They collaborate with each other to fix prices, and the prices fluctuate wildly.

“And these small landholders are the lucky coffee farmers. Much of the world’s cheaper coffee beans are grown on large plantations and haciendas, where near-slavery conditions exist for the people who work there (the same goes for bananas and cacao.)

“So in order to build more security for themselves and their families, a lot of these coffee farmers here in Chiapas have formed the worker-owned co-op of Maya Vinic. They pool their resources and sell their coffee through the co-op to the Fair Trade market, here in Mexico and abroad. As a registered Fair Trade co-op, Maya Vinic receives a stable, fair price for the coffee and also receives a “Fair Trade bonus,” which is reinvested by the co-op into the communities of the coffee farmers and into the development of the co-op itself.

“The co-op functions democratically; major decisions are made by an assembly of co-op members and other decisions made by representatives from each community. The co-op is run by a board of directors elected by the members, the board of director’s changes every two years, keeping a steady rotation of participation from the members. It really is amazing to sit in on these meetings. These guys are super organized and motivated; figuring out ways to keep expanding their market, develop the organization, etc. It’s awesome seeing people come together and find concrete, real ways to build a better future for their families and communities. It is really exciting to be a part of it.”

Galindo: “What does CAFÉ stand for?”

Galindo: “What are these injustices?”

“The label on coffee doesn’t tell you about the hidden cost of an affordable cup of coffee, or everything that went into it. In order for coffee to receive the Fair Trade certification label, the coffee must be purchased from a worker-owned and worker-run democratic co-op. The issue of coffee farmers’ access to FT co-ops is not due to their poverty (most of the co-ops were initially formed by the poorest of the poor, and add more poor to their ranks by the year). Rather, it’s the fact that reaching out to other coffee farmers and including them in these coops is a slow process.”

Galindo: “Who are the big names in coffee?”

Schmidt: “Most of the world’s coffee is controlled by three corporations: Phillip Morris, Nestle and Sarah Lee.”

Galindo: “How do I know what is really Fair Trade Coffee?”

Schmidt: “One more point is that it’s important to remember that the key phrase is “Fair Trade certified”. It has to bear one of two labels: the little black and white person with the arrows, or the blue black and green yin-yang looking symbol. If it doesn’t, it ain’t Fair Trade.”

Galindo:” Why is this important?”

Schmidt: “It is very important to refresh these ideas when administrators want to dress Starbucks as fair trade.

“Starbucks uses all sorts of tricky phrases that sound like fair trade: ‘responsibly grown’, ‘ethically traded’, etc. It would be like if I were to start walking around town telling people my name was Enrique Davalos, and tried to go cash prof’s checks at the bank under this false identity. That’s what Starbucks is trying to do to the Fair Trade movement…the magic word is ‘Fair Trade certified.'”

Enrique Davalos: “I would add that we need to be very alert (as David is) that even with the labels, fair trade coffee is far from being really fair trade. Meaning, there are many coffee producers who don’t have access to these fair trade networks (the poorest of the poorest). In addition, in the fair trade networks, the third world producers don’t have a real control of the process (and the profits.) We still need a fair trade movement where producers’ co-operatives have the power. Some groups call this perspective Alternative Economy (instead of fair trade.)”

Schmidt: “The major concern with Fair Trade labeled coffee at this time is when it is funneled through a major corporation like Starbucks, because there are rumors that Starbucks has been corrupting or falsifying the co-ops it buys from. Still, this is just based on the comment of one coffee farmer who visited us three years ago. Still, Fair Trade continues to be very objectively based and well-maintained to make sure that it remains a democratic, worker-run movement. I just spent two weeks with one of these co-ops, and can testify to that fact.”

Irma Cordova: “What I do know about how Starbucks trains their employees is that they give them the overall impression that they use the most ethical and humane standards when choosing who they buy the coffee from. They go to workshops and train to become coffee masters — learn to identify coffee blends and the regions they are from, and in these workshops they mention how much the company has invested in the towns the workers live. They rebuild infrastructure, schools, and help boost local business because people are staying in their towns. They show amazing pictures of smiling happy people as proof of how Starbucks has saved their lives. They are then given the opportunity to visit one of these amazing towns if they decide to become coffee specialists or go into management so they can see it for themselves.

Galindo: “How can we help?”

Schmidt: “Shop at local shops that distribute fair trade products. Buy only locally grown, organic vegetables. Visit a maquiladora sweatshop south of the Border. Pick a local Starbucks and ask for a brewed cup of Fair Trade Certified coffee. (most Starbucks do not brew Fair Trade coffee on site.) If they don’t have it available, walk out. (But be nice). Do this every day at the same store for two weeks. Get five friends to do the same. They’re bound to notice.”

Davalos: “In the meantime, however, “que viva fair trade” and we will keep fighting until the last drop of coffee (and chocolate and bananas), are fair trade.”

Cordova: “The mission of CAFÉ is to have San Diego Community College District to compromise of only consuming Fair Trade Coffee.”

My question for you, the student and consumer, is to know how much are you willing to spend for your cup of coffee now that you know what’s behind it?