All Cyclists Are Not Created Equal: The Awarewolfs Bring a Fresh Perspective to Cycling in San Diego 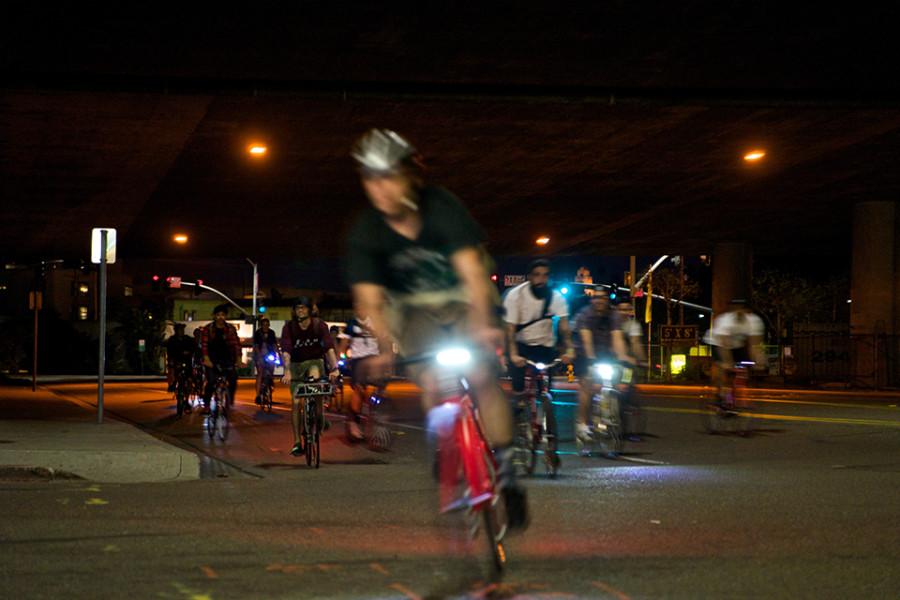 A March 16 ride takes The Awarewolfs from the Old Trolley Barn Park in University Heights through Mission Valley and ends at Fiesta Island, where The Awarewolfs relax and enjoy each others company. Photo credit: Troy Orem

In a car you’re always in a compartment, and because you’re used to it you don’t realize that through that car window everything you see is just more TV. You’re a passive observer and it is all moving by you boringly in a frame.

On a cycle the frame is gone. You’re completely in contact with it all. You’re in the scene, not just watching it anymore, and the sense of presence is overwhelming. That concrete whizzing by five inches below your foot is the real thing, the same stuff you walk on, it’s right there, so blurred you can’t focus on it, yet you can put your foot down and touch it anytime, and the whole thing, the whole experience, is never removed from immediate consciousness.

— Zen and the Art of Motorcycle Maintenance: An Inquiry into Values

These words, written in in 1974 by Robert M. Pirsig, define San Diego City College student Ashley Swackhamer’s relationship with her bicycle. Swackhamer, a 28-year-old philosophy major, doesn’t own a car. She’s commuted everywhere by bicycle for the past year and a half, and before that she used her scooter to navigate the roads of San Diego. “I fell in love with riding and I don’t feel normal if I don’t ride my bike everyday,” she said.

Swackhamer is one of many cyclists who participate in some of the group bicycle rides that occur frequently in San Diego. She started going out on rides with a group called the Awarewolfs, which she says helped improved her cycling.

“I really like riding with them because it’s not something I do once in a while, it’s something I do daily. It’s my life. This kind of makes our presence more well known. This is our life, this is what we chose to do. We’re not trying to create a problem for you, we’re just trying to exist with you,” she said.

The Awarewolfs idea originated around 2007, when its founder, Charlie Sears, came up with the name but wasn’t sure what to do with it just yet. At the time, group bicycle rides were common in San Diego, and there was a strong sense of community until one cyclist died when he was hit by a vehicle. After that, Sears said, the cycling community felt unmotivated. He had wanted to create a ride that was as welcoming as the late cyclist had been to him. With the Awarewolfs name in his head already, he began hosting the Full Moon Bike Ride about a year after the accident.

All cyclists are not created equal, and the Awarewolfs rides are not the same concept as the better-known Critical Mass rides that happen in San Diego and other cities.

“We’re a pack, not a mass,” Sears said. “That’s another way the whole thing got started. I would go on Critical Mass, and I just, I freaking hate Critical Mass. It’s the worst and most stressful experience monthly and it gives a horrible name for bikers. It’s lost all of its core values. The core values used to be exactly what the Full Moon Bike Rides are — just abiding by the laws and bicycle rights, and now it’s just absolute chaos.”

Swackhamer said she feels similarly regarding Critical Mass, that it isn’t safe and that the whole group has gotten out of control.

Jason Boyle, a 34-year-old machine technologies student at City and frequent rider with the Awarewolfs, agreed. “Never been on one and I refuse to go on one,” Boyle said. “It’s not because of how big or how massive they are, it’s because of how disrespectful they are.”

Boyle said he was heading out to a Full Moon Bike Ride one night that happened to fall on the same evening as a Critical Mass, and he said a few of those riders charged him while he was riding his bike down 30th Street.

“They’re disrespectful as hell,” he said. “I heard on one ride they rode through Macy’s or something like that … Regardless of how anti-commercialism you want to portray yourself, have some respect.” Boyle said the stunt put others at risk, and that as a cyclist, even if you don’t care about your own safety you’re still responsible for anyone you put in danger, just like when you’re driving a car.

The negative feelings these riders have regarding Critical Mass help set up a strong code of ethics that participants in the Awarewolfs agree on and uphold passionately. “It’s the disrespectful riders that ruin it for everybody,” Boyle said. “It’s not Critical Mass. We’re not out to take back the streets, we’re out to share the streets.”

To prevent the kind of behavior that gives cyclists a bad name, and to ensure participants can keep up, Sears tells people what to expect when he markets each ride. The Full Moon Bike Ride is for “Anyone and Anybike,” but Sears also organizes more fast-paced rides under the Awarewolfs name. He says the difference between Critical Mass and the Awarewolfs rides is the dynamic and its consistency. Unlike the Awarewolfs, he said, Critical Mass doesn’t have a clear set of rules or a leader.

“The Awarewolfs riders are trained. I’m constantly impressed with some of the stuff they pull in front of me,” Sears said. “There is definitely a general knowledge that on these rides, we are cars. We act just like a car.”

Both Sears and Boyle separately explained that what this means is that the cyclists treat all red lights as stop signs and all stop signs as yield signs. The group of riders makes sure not to create problems for drivers by remaining in one lane to allow the other for passing. And if Sears tells the group to move or pull over for any reason, they do. “We stick together and we’re a pack. We all look out for each other,” he said.

“Together, we can integrate beautifully if everyone does what they’re supposed to do,” Swackhamer added. “If you want respect on the road, you need to respect the cars, as well. Don’t take up both lanes, take only one lane, be aware of your surroundings at all times. They’re really good about that. They’re really good about keeping everyone really tight-knit and making sure they know that if we want to change anything in San Diego we definitely have to respect the road,” she explained.

Swackhamer is one of only a handful of women who participate in the rides regularly. “They’re boys. I ride with boys. That’s the nature of the territory, and quite honestly I like riding with them because they’re sometimes offensive, because that’s my humor … I feel free in that environment,” she said.

Staying true to his “Anyone and Anybike” philosophy, Sears recently called a meeting of those involved with the Awarewolfs to discuss why they don’t have more female participants, and what they can do to change that. While a clear answer hasn’t surfaced yet, he said he was happy that everyone in the group was so active in the discussion. He was also excited that another group in town, called Synchronized Cycles, has begun hosting a New Moon Bike Ride for women or others who may not feel comfortable in the masculine setting of most other group bike rides.

“I think they definitely want to get more girls to ride … but these boys are punks. They’re graffiti-marking, bike-riding, beer-drinking punks, you know, and they’re nice guys. The funny thing is from day one I never felt isolated. From day one they were accepting of me,” Swackhamer said. “The cycling scenes in general are like people. There are so many aspects of bicycles and communities you can fit into.”

She credits the Awarewolfs rides with teaching her how to ride by not just pushing her physically but also showing her how to coexist with cars safely. “What’s great about these rides, especially if you’re a girl, its like you have 20 brothers all looking out for you,” she said. “They showed me the city and I got really familiar with it. And riding with people who know how to ride got me to trust myself.”

“There’s such a disconnect between cars and cyclists, and people forget that we’re people too … Cyclists need to remember that, too. But, people make mistakes. I get angry when people get defensive,” Swackhamer said, explaining that she learned to control her temper through the Awarewolfs. “Those boys showed me that if you got mad at every driver that did stupid things you would live a life of anger and stress. You just have to let it go.”

The first Awarewolfs ride started out with just three or four people, Boyle said. While the group continues to grow, none of the cyclists interviewed for this story have any concern that the values will be lost. “The older heads set a precedent for the kids that come into it. It’s not Critical Mass. We’re not out to take back the streets, we’re out to share the streets,” Boyle said. “There’s good and bad drivers and there’s good and bad bicyclists. You’ve got the drivers that will give you space … and then you’ve got the people who can’t take three seconds out of their day to slow down or go around you —those are the people we’re more aimed at.”

While San Diego Critical Mass has no clear leader, and their website is outdated, they do maintain a current Facebook page but did not respond to attempts made to contact them for this story.

For more information about the Awarewolfs, their schedule of rides, or to purchase merchandise handmade by Charlie Sears in his Normal Heights studio, visit theawarewolfs.com.