Building a New City: All the Details on City College’s Campus Facelift 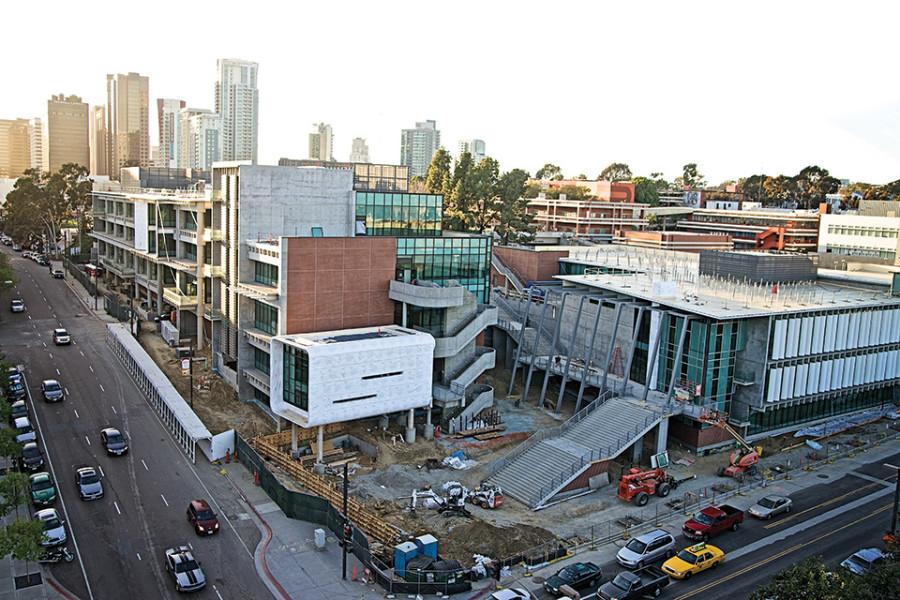 Construction continues as the Arts and Humanities and Business Technology building are prepared for the fall 2014 opening. Photo credit: Troy Orem

The buildings are expected be open for the fall semester in August. The amenities are many and may inspire students to take classes they might not have otherwise chosen.

Many have wondered why the project wasn’t completed sooner. Building for the public domain, such as a school, follows the most stringent of state and local requirements. Any building, residential or public in San Diego, must be built with regard for fault lines. The Arts and Humanities and Business Technology buildings are separated by a fault line and, as a result, are connected only by a bridge.

The Arts and Humanities and Business Technology buildings were built through bonds that were passed by the voters of San Diego. Proposition N was passed in 2006 and gave granted the San Diego Community college district a $870 million bond while Proposition S, passed in 2002, granted the district with a $685 million going towards campus wide infrastructure projects at City, Mesa and Miramar Colleges and seven Continuing Education campuses, according to public.sdccdprops-n.com. The passing of these Propositions led to a total of about $1.6 million in bonds.

Before any ground was cleared for construction, detailed architectural drawings and diagrams for every other part of a building design were sent to the Division of the State Architect’s office. Comments from them, corrections and approval can take more than a year. Not even the site can be cleared for construction until design approval is given. For the Arts and Humanities and Business Technology buildings, a stack of approximately 150 drawings are kept in the conference room next to the office of Tom Fine, the campus project manager for San Diego City College. He’s also a consultant with J.E. Moore Consulting Inc., which was hired by the San Diego Community College District.

Fine sums up his position: “I’ve been the project manager since late 2007, early 2008, so that just means I’m the main point of contact for all of the Prop. S and N programs here at City College.” Part of his job includes taking a building from the design phase through construction into occupancy. “It’s like the dream job for me. I love it,” he said.

The Arts and Humanities and Business Technology buildings have gone over budget, according to Fine, and are beyond the projected finish date of Oct. 9, 2012, according to the update status page on City College’s website.

Despite all the setbacks, both buildings have a lot to offer students. The Arts and Humanities building will be the new home to all the visual arts classes. There is studio space for painting, drawing and pottery. There are indoor and outdoor firing kilns, a sculpting studio and a glazing room for pottery. There’s also a sculpture yard and a student art gallery. Lockers have been installed in the hallways by the art studios, as well.

The English Department and Foreign Language Department will each have labs in addition to a World Cultures Center in the new building.

A black box theater is in the building, as well, for the dance and music classes, which are temporarily housed in the Arts and Humanities building, as are some of the dramatic arts classes.

And about that cube at the front of the buildings: Fine smiled and explained that his team affectionately refers to it as the mailbox. “All you need is the red flag and it’s the mailbox, right?” he joked. The intent for it is a student common area. A place where students can do homework, socialize and rest between classes.

The Business Technology building will be the new home to the school of business; Enactus, a business student organization formerly known as SIFE; and new, spacious information technology computer labs and classrooms. There will also be a bookstore annex in the building.

Another feature of both buildings is they are certified as green through the Leadership in Energy and Environmental Design (LEED) rating system.

Even with the completion and opening of the two buildings, City College will continue to see construction projects.

As of this writing, the M building has been gutted. The renovation is expected to be completed in October and opened Jan. 2015. The bottom floor will be for facilities and maintenance while the top floor will be the new home for the Associated Students Government and Student Affairs.

Renovation on a portion of the first floor of the L building started in April and should be ready in July. Upon completion, it will house KSDS-FM Jazz 88.3 and its two new on-air studios, in addition two new editing studios. The Digital Journalism department will have a new home in the L building as well.

The C building begins renovation in August. It’s expected to be completed in May 2015.

The next major project will be the D, A and T buildings, which will be packaged together as one project for consistency’s sake and to save money.

“In the grand scheme of things at City College, we try to be just wise stewards of this money. It’s not our money. It’s taxpayer money,” Fine said. “That’s part of the stewardship of the money. We can spend a lot of money doing this in three different projects and setting up temporary barriers, temporary utilities, but all that money that’s temporary is just, you might as well flush it down the toilet. We’d rather take the money we have and spend it on a permanent improvement than temporary barriers.”

The D, A and T buildings project is currently in the design phase and may be able to start construction in Jan. 2016. So far, what is known about the project is that the A building will be for student services, the D building will have a new food services and dining area, and the T building will house the Engineering and Technologies department.

The Child Development Center is also on the horizon of construction projects. A start date is to be announced, but the proposed location for it is the T building parking lot.

“I think this district is diligent in how they spend their money and I love it,” Fine said. He thinks the district’s building decisions have been fiscally and environmentally responsible.

To keep up with all the construction at City College, visit
www.sdcity.edu/CollegeServices/CampusResources/BuildingUpdates.
For more information about LEED Certification, visit
www.usgbc.org/leed