Mastermind Behind the Centennial Celebration 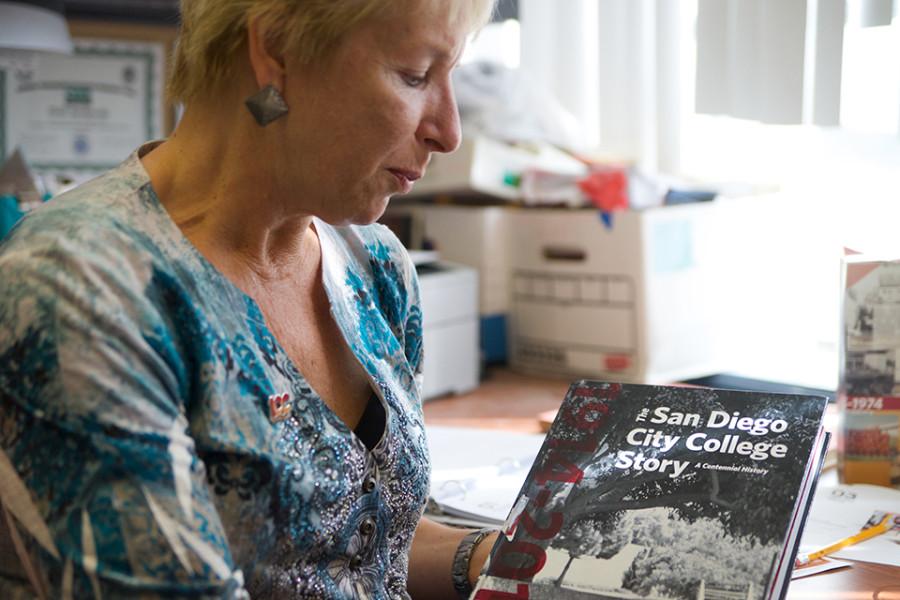 “As the public information officer, my job really is to be the communications facilitator for all things centennial, and so that’s both internally and externally, and so when I started back in 2001, even then I recognized that the 100th year was coming,” she said.

Bunkowske prioritized for the centennial. “First, we started out with creating a branding and identity for the centennial itself, so we worked with about a 14-member team here at the college and went through all kinds of different designs and did lots of focus groups so we came up with our centennial logo.”

A brand guideline for the campus was helpful in accomplishing and setting up a brand and identity for the centennial.

“The cohesive look and feel give equity to the brand and the college community. The identity unified all the programs on campus,” Graphic Design Professor Candice Lopez said.

From the portfolio, students helped create pins (including commemorative pins for graduation), banners (such as the ones seen on the street and on campus, which currently total more than 40), an anniversary poster and four large display boxes.

The boxes are currently in production by graphic design student Sam Spratt and Duane Gardella from the theater department. Once completed, they will be placed in the Learning Resource Center or possibly the lobby of the MS building. The purpose of the boxes will be for students, staff and faculty to view them as they venture around campus. The arrangement is important, as they will have captioned photographs depicting City College’s history.

The centennial has unique touches, both large and small, one being the brand logo itself, which looks like the number 100. Currently, the two Cs appear to be wrapped. Post centennial, the plan for the logo is for the Cs to be depicted as unwrapped so the logo will take City College into the future.

“For our college to have reached the milestone of being 100 years old, and we’re the first community college in San Diego, we’re the fifth in California … that’s really a distinct honor that we want to promote forever, really until the 200th anniversary comes along,” Bunkowske said.

In preparation for the centennial, historian Steven Schoenherr has spent the past year compiling 90 years of City College history for a book.

It starts in the 20th century when City College started in the “Old Gray Castle” known as San Diego High School, then takes readers through nine decades of locations, students, staff, clubs, student-produced newspapers and magazines, up to the newest buildings on campus and the current year.

The book is the first on City College’s long history and will be titled “The San Diego City College Story: A Centennial History.” The book will soon be sold in the campus bookstore for $30 and is currently available for pre-purchase on the centennial website.

Bunkowske said that the celebrations of history aren’t limited to buildings or landscape, but also incorporate the many people who have worked at City College over the years.

Students are also hoping to apply the logo and identity of the centennial to art that will be featured on electrical boxes.

Bunkowske noted that while the campus celebrated its 100th year commencement this year, the 100th graduating class will actually be next year, in 2015.

Bunkowske’s background includes serving as a congressional aide and a consultant for political campaigns. She’s been with City College since 2001. Lopez, who has been teaching at City College for 25 years, was part of the team that hired her and describes Bunkowske’s work ethic as almost heroic.

“If she was Batman, I was Robin,” she said, speaking fondly of Bunkowske. “I really really respect her. She’s a really dynamic personality with tremendous energy; she has a sort of boundless energy. She’s a fearless risktaker, innovative and resourceful.”

Sean Bacon said via email: “My focus was on a class Candice Lopez and I created dedicated to producing graphics and visuals for the centennial. It was amazing to connect our program and talented students to other areas of the campus in order to help give a consistent look to the celebration. As a former student and now adjunct I am excited for City College and what will come in the next 100 years.”

City College has much to celebrate for its centennial, and Heidi Bunkowske has made it a tangible reality to make the campus community proud for the next 100 years.

For all things centennial for City College, visit centennial.sdcity.edu.