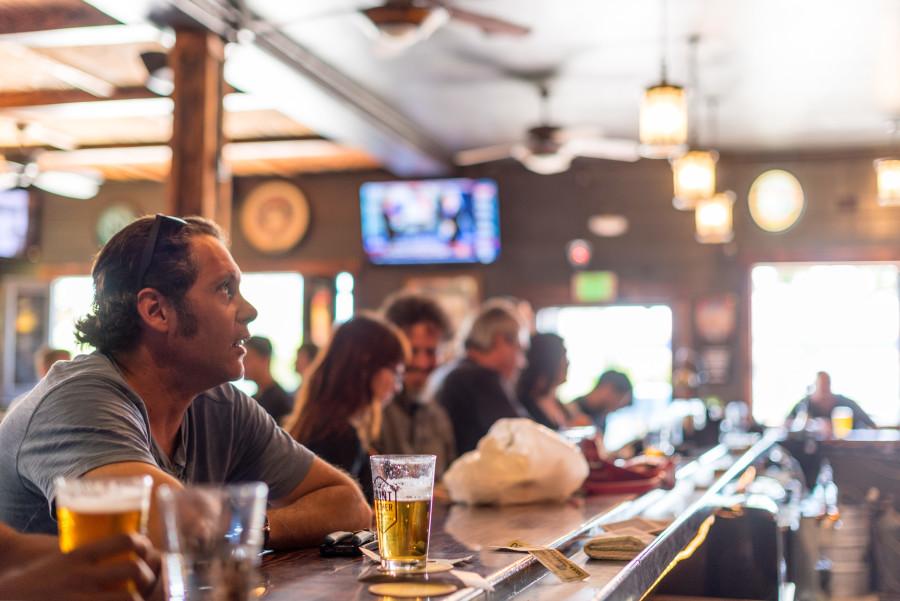 Be it catching up with friends or on the game, the Monkey Paw provides a comfortable place to enjoy a pint. Photo credit: Joe Kendall

There’s something one should know every time they look to the drafts and swirling colored chalkboard at the Monkey Paw. There’s a laboratory hidden behind those many taps. There are breakers boiling, measurements taken and growling beasts in brown jugs.

No science fiction going on here mind you, no animal cruelty, either — but there is a mad scientist making $4 pints have a $20 taste back there. Above those plenty of taps are 15 medals and ribbons the bar has taken, and behind any visitor sitting bar-side are the customers they’ve won. A whole neighborhood is brewed together inside this barrel-looking interior.

It’s part Golden Hill, it’s part City College, the rest of Downtown, and it’s whatever this hell East Village is suppose to be becoming. It’s a dive bar devoid of clientele-fed drama that borders students chasing the up in the world and utter poverty three or four blocks away.

It’s patrons are as diverse as the IPAs, Belgians or stouts in this town. Young, old, hardcore and hip, messengers taking a break from their bike deliveries alongside suit and tie mayoral candidates — all are holding a glass in their paws. There’s plenty of college life seen in here, too. Master theses are typed next to bar napkins, professors grade papers in the midday, and end of the year cheers.

Three years it says on its stickers for this bar to get this way. It took three decades — depending on who you ask in the scene — for craft beer to get to the boom its riding now.

Like a brew in a customer glass it took a bunch of equal ingredients for this to work. It took Karl Strauss setting up on Columbia Street in late ’89. It took guys having ideas that worked there from one time or another to go on their own. It took bigger companies like Stone to give out the secrets of the trade. It meshed well with the little brewers pointing in each other’s directions. That’s about when the batch boiled.

It also needed a city seeking more of an identity. San Diego found that in craft beer. The local drinkers eyes’ were excited seeing bright taps sneak their way into a pub. San Diego wasn’t just merely a place by the bench any longer.

It was an all-organic thing, both this bar’s creation and this craft scene. Owner Scott Blair was one of those guys going for taste who did time at Strauss. He started this place with one other brewer before the scientist arrived. It’s hard to know whether most patrons remember the original brewer, Derek Freese, or even tasted his ribbon-collecting ales while on tap. But chances are they have seen Cosimo behind the bar.

The mad scientist named after the stars, Cosimo Sorrentino. A City College alumnus who used to sit over in the Hive drinking Boddiningtons and Guinness, before it had the Nectar Room. All when East Village was the part of town one would call fledgeling.

He doesn’t have a real degree in cartoonish villainy, although he does have the work ethic of a man looking to take the world. He sips a sparkling, in-the-works 4.5 IPA because there’s still more of the work day to go. He periodically checks updates from other brewers and delivery times on a Mac. At one point, he is off to check the Sweet Georgia Brown boiling. When he returns, Cosimo discusses five brewing years and times he took home brew to Hamilton’s for feedback. There, his potential was seen (or in this case gulped), which lead him to make what he wants in those reflective silos.

“The freedom to come at a beer from any angle at any time really helps me be able to do what I do every time,” Cosimo says. “And to be honest I never really know what a beer is going to be like when it starts. I have an idea what it should be; doesn’t mean it will be.”

The taste of each brew here is … well, a craft, in that it took discipline to make a taste that bonds a neighborhood. They have weird names like Fanbelt, Hooked on Chinook, Meaty Beety Big n Bouncy and Cocomootive. There are names that stick to the damn dirty ape theme — Cornelius, Brass monkey, Lab monkey, Mighty Joe Young. Satanic Chimp, and somewhere in there’s Creamciscle beer. It’s not all in the names, it’s all in the brew. It’s an imagination creating a universe of beers to explore on tap.

A creamciscle in a beer for an outsider is unthinkable. Listening to Cosimo explain how an accident becomes a lesson in improv, it doesn’t seem that daft. He isn’t distracted by what good ole Davey’s cooking or the jukebox shuffle when he is breaking down ingredients and time. It’s all culinary how he speaks.

“I generally go for an experience when I‘m designing a beer. I say I want to drink this beer … Summertime on a patio with a fish taco, and I want to able to have three of them and be able to drive home; or the opposite; cold winter night, I want a piece of chocolate and 8 ounces of this beer,” he says.

Brewers gunning for quality is what compelled restaurants to plant beer gardens all over town.

A craft beer in San Diego is a nice thing to have in your hands. It’s a way to applaud the brewhouses from South Park to Vista. It’s a person saying I love this city, it’s people and what is made here.

See, this isn’t all just about drinking. This is about a group of people who saw tangible culture and work with their paws to make it real. It certainly wasn’t easy then and it certainly isn’t now. This culture takes plenty of double shifts to be maintained and sometimes what your brewing doesn’t turn out the way it was first imagined. So why do it in the first place? All so that there is one more bar around the corner of a neighborhood. Corny as it sounds, sometimes you want to go where everybody knows your name.

It isn’t only the the Monkey Paw. There is a laundry list of places to choose because brewers are pushing flashing buttons by shiny fermenters. There are places in town where you can giggle at names on menus and find craft-in-a-can, for a brewer Its worth all the endured steam to the face while brooding over a batch with a long stick.

Is it over the top to compare it all to “Cheers?” Yes. What’s real is that San Diego has places … way more places like it open, where creative hold their pints and think of their wishes. It’s this effort that gives a city a chance to be more of a memory. One that will last longer than the effects of even a couple of 12.0 pints.