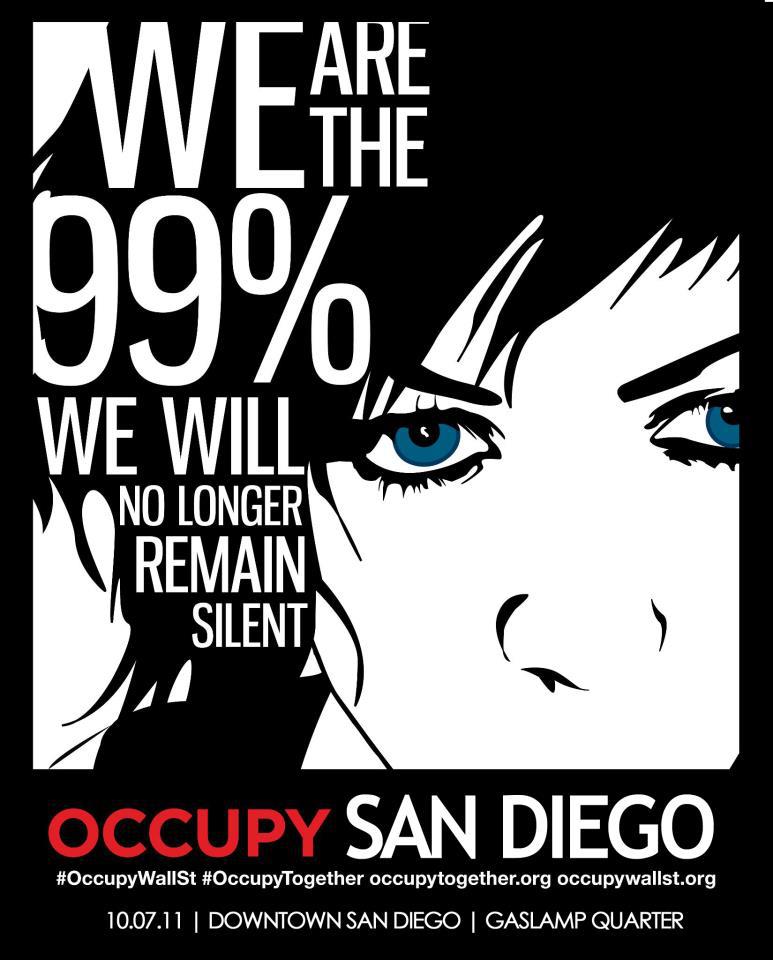 Whistles and drums could be heard coming from the seemingly endless wall of people as it moved down Front Street. Police officers kept traffic at bay, while motorists honked in support of the march.

Hundreds of people marched into Civic Center Plaza in downtown San Diego as part of the Occupy San Diego, a movement inspired by Occupy Wall Street.

About a month ago people began to camp out on Wall Street in New York to “take action against the greed and corruption of the 1 percent.”

Since then the movement has spread to Boston, Chicago, San Diego and various other cities across the country and the world.

“This is what democracy looks like!” the group shouts as it walks through the city.

Big business, the media, Congress, tax reform, the super wealthy; everyone and everything seemed to be a in the sight of the Occupy San Diego protesters. But the message was clear; the protester are tired of “corporate greed” and the effect it has on democracy.

Protesters met at a Children’s Park on the corer of Front Street and West Island Avenue and march down to Civic Center Plaza, where they met with a smaller group of protesters at about 5 p.m.

Once at Civic Center Plaza the large group began to express their concerns over corporate bailouts, cuts to education, the state of the economy and various other topics.

At approximately 5:20 p.m. the protesters walked back to Children’s Park.

Once back at the park the crowd separated into smaller groups. Some formed drum circles, others read poetry into megaphones, some began to set up tents. Regardless of the group the message was the same, “we are the 99 percent.”

Children’s Park is where some protesters are going to live until they see change.

The Occupy San Diego movement, which despite its large size, seems well organized. Food and water are being provided for those who will occupy the park, and additional marches to Civic Center Plaza are planned.

The protest even has its own “security” personnel to keep people calm and the protest peaceful.

“This is the revolution we have been waiting for. We are peaceful but we will be heard,” said a speaker at a candle light vigil held in the park.

“This is the change we were promised,” the speaker said to loud cheers.

As of the time of this writing 936 cities have formed similar meet ups and protests according to Occupy Together.org the unofficial hub for the events stemming from Occupy Wall Street.