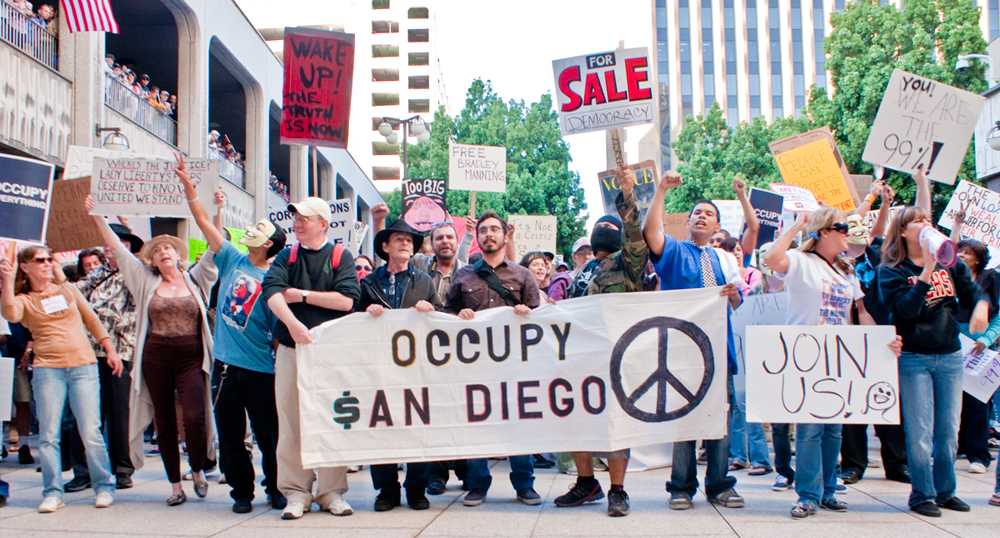 A 74-year-old woman with a walker, a 37-year-old student living out of his car and a 65-year-old Argentinean immigrant are some of the faces that made up the estimated 1,400 people that participated in Occupy San Diego.

The demonstration that began Oct. 7 at about 4 p.m. in downtown stemmed from a grassroots movement to “take action against the greed and corruption of the 1 percent” that started at Wall Street several weeks ago. Since then the movement has spread to 1,106 cities, as of Oct. 9.

In San Diego and in cities across the country, a core group of demonstrators said they would continue the occupation indefinitely.

“I’m concerned for my children, grandchildren and great grandchildren,” said Marie Johnson, age 74, as she stood on the rim of the crowd with a walker.

Johnson participated in Occupy San Diego for her family. She said she feels that the Republican Party is blocking legislation that would create jobs. While that may not affect her, she said, it affects her children.

One of Johnson’s sons works as a police officer but she worries about his safety working double shifts and forced overtime because of budget cuts. She has another son who has a degree in electrical engineering who cannot find work. And she’s got a daughter also out of work who “can’t even get a job flipping burgers.”

“Never what I expected for my children,” Johnson said.

The occupation has been very well organized across the country through the Internet. Every protest is planned by different committees organized in a non-hierarchal way. In San Diego, these committees met nightly for a week and a half before the march, coordinating the event. Anyone was allowed to participate in the meetings.

There were committees for security, food, sanitation, first aid, education, public relations and publicity, orientation for newcomers, a legal group to inform protesters of their rights and an arts and entertainment group, among others.

“I’m not a big protester, but if there is a big event I’ll go,” said Ben McFadden, a 37-year-old City College student living out of his car.

McFadden is unemployed and depends on his Pell Grant to survive. The cuts to education have made it difficult for McFadden to take the radio and television courses he needs.

While McFadden has friends and family in town, he does not live with them because he does not want to be a burden to them, especially with the state of the economy.

McFadden said that the disproportionate wealth in the country has eliminated the middle class. “I just want it fixed,” he said.

On the first day, protesters marched out of Civic Center Plaza at about 5:20 p.m. in full fanfare. They chanted, drummed, and blew whistles as they plowed through downtown. People continuously ran by the large group taking video and photos with whatever camera was handy. Spectators could be seen all along the route to Children’s Park. Motorists honked in support as they waited for the streets to clear.

After the initial march through downtown, the demonstrators set up camp in a Children’s Park across from the San Diego Convention Center. People set up tents, and socialized. The dull roar of the crowd was broken constantly by groups chanting and individuals preaching into megaphones.

“We are all Troy Davis!”

These were some of the many slogans being chanted by children, twenty-somethings, baby boomers, seniors, anarchists, socialists and service members.

Around 7 p.m. there was a candlelight vigil to honor those who lost their homes, jobs, and essentially their lives because of the recession.

About an hour later a group of youths with instruments started jamming and what seemed like the entire park was enclosed around them in a circle, dancing, holding hands, singing, and laughing.

Abel Valls is a 65-year-old Argentinean immigrant who now lives in San Marcos. Valls use to work for IBM in Argentina, when the company asked if he would like to transfer to New York for a year, which turned into him living in this country for 35 years.

When asked why he was participating in the Occupy San Diego demonstration, Valls broke into tears.

“I’m full of joy,” he said. “These people have touched my soul.”

Valls explained that he was he was happy to see so many people participated in the process, especially since have been “pushed away by the government.”

Valls said that he has started to see a parallel between the United States and Argentina. Particularly in the decisions the U.S. is making and the ones Argentina made in the past the have resulted in it being in the current economic state it is in now.

Around midnight, the arts and entertainment committee has planned for several musicians and poets to perform. First, a man recited poetry, then a drum circle formed. Following that a woman played a harp enchanting the occupants of the park. A couple more acoustic bands played and once again, everyone was dancing.

That day they marched again to the Civic Center, where organizers say they camp indefinitely.

Occupy San Diego demonstrators have been using Facebook to communicate with one another. Events, planning, requests for donations and news of the occupation are constantly being posted.

It is unclear how long this movement will last, but it does appear to be spreading. A similar event is being planned for Oct. 15 in Tijuana.

The commitment of the demonstrators can perhaps best be captured by a woman who closed the candlelight vigil on the occupation’s first night, “We’re not leaving until everyone is happy.”