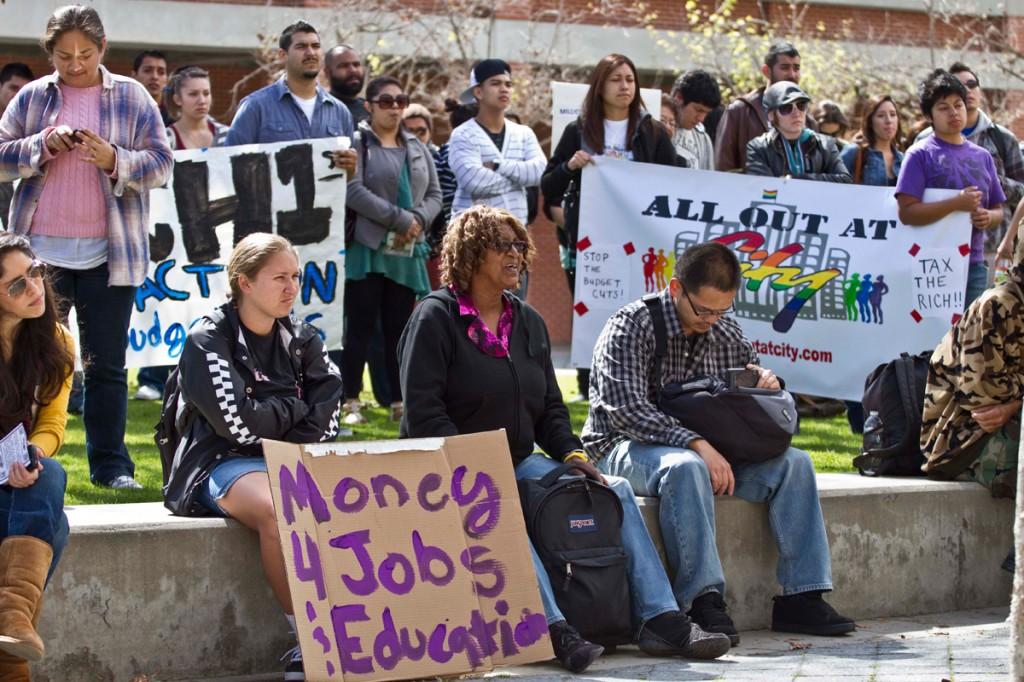 City College joins   other campuses in  day of protest

At City’s Curran Plaza,  at around 11:30 a.m., approximately 250 protesters weaved through the campus shouting slogans like,  “We’re students, we’re poor, we won’t pay anymore,” eventually ending back up in Curran Plaza.

Back at the plaza, speakers and a live band performed. Around this time the amount of protesters dropped by about half.

Jim Hungry, a community member who participated in the protest, said that he believes that access to education should be a basic human right like food and water.  Several other students shared a similar feeling, and wished that education was free.

The overall consensus of the protest was that the cost of education is too high and that budget cuts have had an adverse effect on education.

“A school is for education it’s not a business,” said Annette Davis, a member of Occupy City College and business student.

Davis said that one of the reasons that she became active in the movement was the cancellation of summer session last year.  She said that she wanted to know where the money from fee increases goes to.

“If we don’t do it (protest) classes will be more expensive. Without financial aid  I wouldn’t be here,” said student Brendo Montes.

Not everyone  on campus supported the protest as the participants shouted into megaphones, banged on windows and shouted into classrooms.

“I don’t see how it’s helping … They can come on a Saturday,” said Ruth Alcede as the protesters passed through the A-building.

Alfonso Morin was in a statistics midterm when the protest passed by his class. He said that protesters banged on the windows and made a lot of noise. He said that it made it very difficult to concentrate for several minutes.

“They shouldn’t go to classrooms. They could have stayed in one area,” Morin said.

City College has had several similar protests over the last few years. Francisco Moreno, professor of sociology and the academic adviser of Occupy City College, said that the method of this protest is not the most effective but “it is a place to start.”

He added that given the circumstances, “we have to begin to get people active.”
Moreno said that protest can be effective, and there is a strong history of them working in this country and others. He said that these protests are less effective because this generation has had everything handed to them, and they are not used to having to protest for anything.
When asked if leaving class to protest was the best use of a students’ time Moreno said that one day realistically would not make much of a difference in their education.
He added that participating in the protest offers students experience that they cannot get if they missed class for other reasons.
Occupy activists at City College meet Wednesdays at 2 p.m. in Gorton Quad.