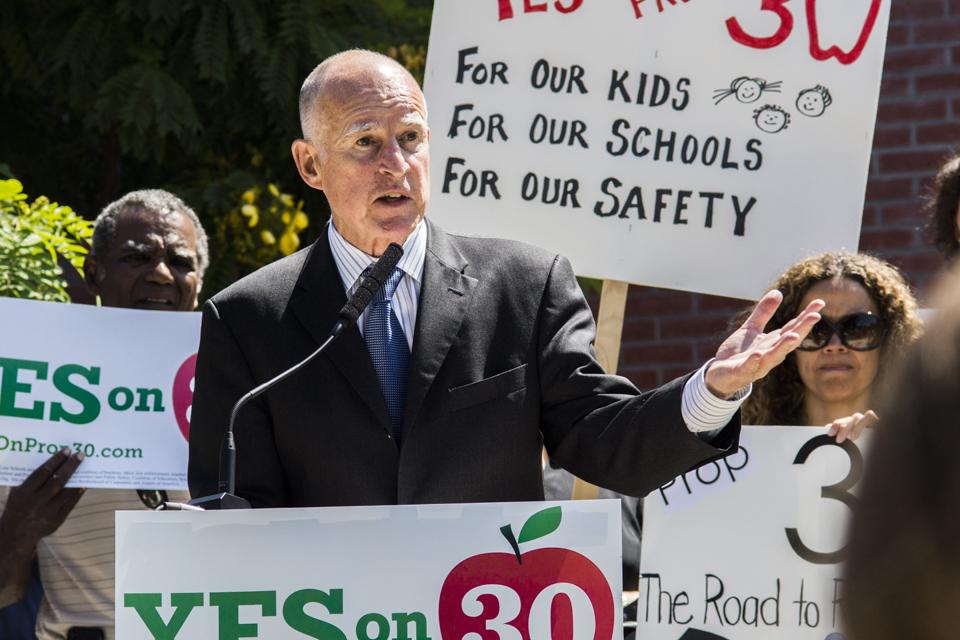 Governor Jerry Brown addresses a crowd that formed in front of the B building Aug 20. Describing the necessity of Prop 30, a proposition that, if voted through, would mean additional funding for California schools.

Gov. Jerry Brown’s campaign for Proposition 30 came to San Diego City College Aug. 20, the first day of the fall semester, to raise support for the initiative which will be put to voters in November.

Proposition 30 is intended to stop a $6 billion cut to education by raising the income tax on the highest and second highest tax brackets by percent 1  and 0.5  percent respectively as well as by implementing an additional quarter-cent sales tax. Revenue from the new taxes would also go towards local public safety services such as police and prisons.

Brown was not shy about the initiative being in part a tax on the highest California earners, but he assured the crowd that the tax would not leave the wealthy wanting. Brown said that the tax would cost about $4,500 for those earning $1 million this year.

“Gov. Brown is not making the easy choice, but he is making the right one,” said City College professor William Stewart in defense of Brown and Proposition 30.

In the San Diego Community College District alone $34.7 million has been cut since 2008 resulting in 2,750 eliminated class sections, according to the SDCCD Public Information and Government Relations office.

Brown explained the effect of the initiative in black-and-white terms as a choice between either more or less course offerings to community college students come next year. “There’s no in-between,” Brown said, “This is not about politics, it’s about a choice: if you make more, give us one percent.”

Gov. Brown battled with reporters who questioned whether the initiative can inspire confidence in voters that additional revenue will be spent on education.

“The law [creates] a specific legal fund,” said Brown. “All the money from Proposition 30 goes into a trust fund for education.”

If passed the initiative would create an account called the Education Protection Account within the General Fund “to ensure that public education is not harmed in the process of providing critical protection to local public safety services,” as described in the initiative.

Copies of an informational handout paid for by Yes on Prop. 30 that were being distributed before Brown gave his speech describe the initiative as the “only” initiative that will protect school and safety funding. Many might find this slightly disingenuous since a not altogether dissimilar initiative, Proposition 38, will also be on the November ballot.

Proposition 38 details a tax on most California earners by using a sliding scale adjusted to income, revenue from which would go to K-12 education and preschools, but not to community colleges, according to the summary of the initiative prepared by the attorney general.

Many city college students showed up in front of the campus on Park Boulevard in support of Brown and his tax initiative, among them SDCC student Jabbarus Jordan.

Jordan, 27, objected to overcrowding in classes and “the whole taking of summer classes.”

He said that his plans to transfer to a university as a small business accounting major were delayed due to the elimination of summer course offerings.