Chancellor troubled by ‘assault on athletics’ 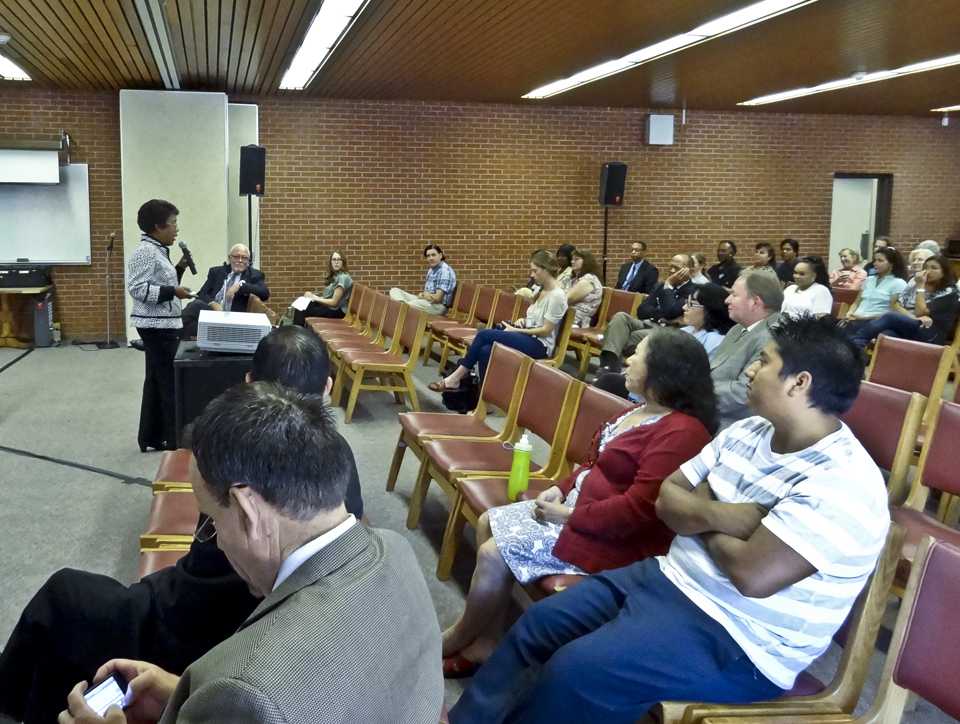 Chancellor Constance Carroll speaks to assembled faculty and students during a forum held in City’s faculty lounge on Sept. 18.

“Most troubling is the continuing assault on athletics,” District Chancellor Constance Carroll said, who went on to mention the irony that sports programs are not questioned at the university, high school, or K-12 level.

What is often overlooked when cutting back on sports programs is that all students in athletics are full-time students, according to Carroll.

“They have among the highest levels of retention and success. For many students that are highly diverse, it is their only ticket to the universities,” Carroll said.

Less than one percent of the budget goes to athletics and the rest of the money for those programs comes from independent sources, explained Carroll, who criticized the state of California for not considering these facts.

Moving on to academic changes, Carroll noted that the Accrediting Commission of Community and Junior Colleges now requires inclusion of Student Learning Outcomes to course syllabi.

Compliance with accreditation standards is a requirement for community colleges to receive state and federal funding, in addition to most grants.

City College President Terrance Burgess said that City is making excellent progress on the SLO requirement and indicated it was further along than some other schools despite the project taking about nine years to complete.

Another change, mandated by state bill 1440, decreases the number of units required to graduate from a California State University with a bachelor’s degree to 120.

The first half of those units would make up an associate’s degree from a community college, encompassing general education and pre-major requirements. The second half would be upper-division courses for the major completed at a CSU.

Although state bill 1440 has received some poor reactions for cutting the required coursework drastically for some majors, a Transfer Model Curriculum is being developed to create associate’s degrees that would guarantee students admission as a junior into CSU schools.

“Any of our students who has not gone through a degree program, a pre-major program that fits within this model, will be third place. This is not something we can debate about. If we care about our students, this is something we have to do,” Carroll said.

Students with coursework completed along the TMC track will have top priority when transferring, effective this transfer cycle.

“As soon as end of November, our students applying to transfer need to indicate on their application that they would like to transfer under the conditions of the 1440 legislation,” District Vice Chancellor Otto Lee said.

Right now, SDSU has accepted nine TMC degrees and the community college district faculty is trying to get those degrees ready for the next cycle of transfers.

“We have a timing issue with application to San Diego State. Their app period opens on October 1 and closes on November 30, so during that two month period, students that are intending to transfer are going to have to identify the majors that they want to transfer into. We’re hoping eventually that we’ll have nine degrees in place by November that they can select from, but it’s going to be really key that they meet with their counselor and they make sure their ed-plan is updated,” said Burgess.