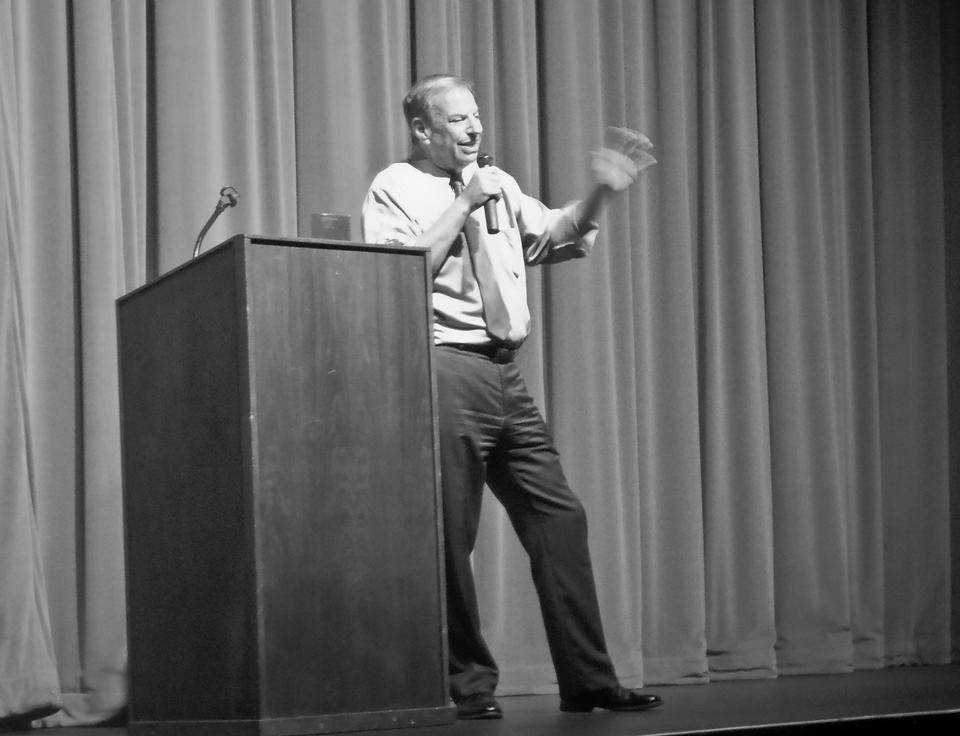 Congressman Bob Filner at the Saville Theatre Sept. 17, speaking about the Constitution and Civil Rights.

Filner lectured on the U.S. Constitution’s validity as a legal document and told personal stories about his role in this country’s Civil Rights movement.

“I got the honor, actually, of meeting Dr. Martin Luther King Jr. when I was thirteen years old. And I committed myself at the time to non-violent, direct action. The particular set of events I was involved in was called freedom rights. What they were designed to do explicitly was to test the laws of segregation which were bound to be constitutional in the southern states,” Filner told the audience in the theater.

Presenting himself with the kind of ethical class that has helped his success in politics, Filner made no mention of the upcoming mayoral race until the question-and-answer session with the audience following his lecture. He instead focused his entire time speaking on how the Constitution has been used throughout history to earn U.S. citizens equal rights under U.S. law.

“Dr. King saw law with a capital ‘L.’  You broke a law with a small ‘l’ and took the consequences of breaking that law by going to prison. You were upholding the whole notion of law with a capital ‘L,’” Filner said. “And then you test those laws by, you know, the various constitutions first at the state and then of the nation to see whether that law was applied correctly.”

“We could have invited a Constitutional Law expert who understands that Constitution inside and out but who had never been involved with this document outside of a classroom, but how exciting would that have been?” Haro told City Times in an email about why he requested Filner for the speaking event.

“Congressman Filner has literally been fighting for the last fifty years to make sure that people understand the importance of this document and that the principles enshrined in it should apply to all Americans.”

Constitution Week at City also featured a book display in the LRC, a voter registration table in Gorton Quad and “Voices of a People’s History: America Uncensored,” hosted by Professor Larissa Dorman that featured students giving speeches at the Saville Theatre.

For more information on Constitution Week and other World Cultures Program events, go to www.sdcity.edu/WorldCultures.