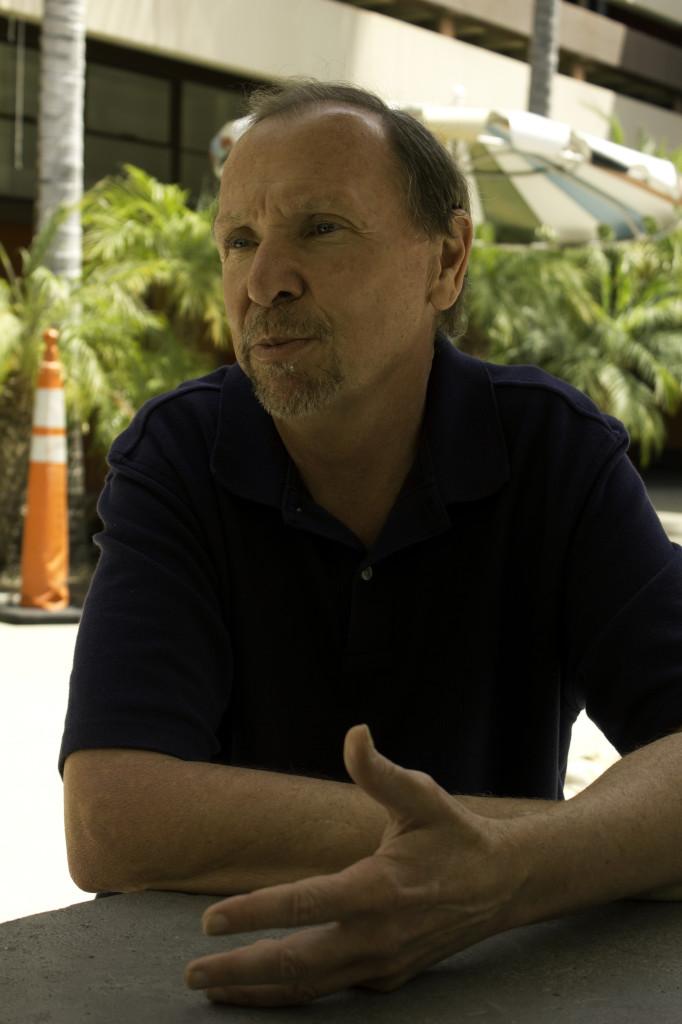 City College alumnus David Hasemyer speaks on May 15 about the Pulitzer Prize he was awarded for a series of articles from Inside Climate News. Mary Watson, City Times.

City College alumnus David Hasemyer was recently awarded a Pulitzer Prize for a series of articles from Inside Climate News, “The Dilbit Disaster: Inside the Biggest Oil Spill You’ve Never Heard Of.”

Hasemyer is a 1976 graduate and former editor-in-chief of the Fortknightly (known today as City Times).

He said he believes some of his success can be attributed to City College and his time there.

“By the time he’d gone to State, he did everything. He’d been Editor of a newspaper, he’d gone down to the printer’s and help proofread, and so when he got to SDSU and applied for the Daily Aztec, big deal. He had a lot more experience,” said John Markley, professor and former Fortknightly adviser.

During his time at City, Hasemyer wrote several pieces about a controversy in the Associated Student government in 1976 during his last semester at City College.

Markley recalled the environment during Hasemyer’s term as editor.

“It was the times when everyone read the newspaper. It was a lot more involvement. The Vietnam War had ended, and we had a lot of veterans, a lot of people that had been drafted, the Chicano movements, African-Americans were leading the way and getting involved in politics … people seemed more engaged,” Markley said.

His dedication to reporting the news to the public allowed him to continue in his career field at the university level and outside school.

“He started here at City and then he transferred to San Diego State, became editor of the Daily Aztec, then he left that and went to work for a newspaper called the Daily Californian, and then he got on to the Union-Tribune,” Markley said.

Hasemyer was an investigative journalist at The San Diego Union-Tribune for more than 27 years before moving on to be a public official for the Federal Emergency Management Agency.

At InsideClimate News, he wrote a series of pieces about a ten million ton pile of nuclear waste that threatened the Colorado River, which affected his hometown.

“I grew up in the Uranium boom times, with the mill, the mining, and that sort of thing. And I’ve always stayed in touch with my hometown community and just reading the paper going ‘wow, this is really big deal,’ especially considering that the Colorado River supplies San Diego County with more than two-thirds of its domestic water supply,” Hasemyer said.

His goal is to find “good stories,” and he was able to get that experience of finding facts through his community college first. His time spent at the Fortknightly gave him the experience to transition more easily in journalism at the university level.

“It was actually easy for me. My last semester at City was my first semester at State, so I was finishing up here and taking a few classes at State. It wasn’t a huge transition for me,” Hasemyer said.

He brought up his adviser as well, who pushed him early on in his career.

“Students need to be encouraged. If they are dedicated and really want to pursue whatever career — journalism, biology, anatomy, math — the instructors really need to encourage that. And that’s what Markley did. That’s what I took from him,” Hasemyer said.

When he won his Pulitzer Prize, Markley received an email from his former student, thanking him for his advisement at the Fortknightly.

“The thing that impressed me the most was when he sent me that email the night he received the award, thanking me for his start at City College. It’s pretty amazing,” Markley said.