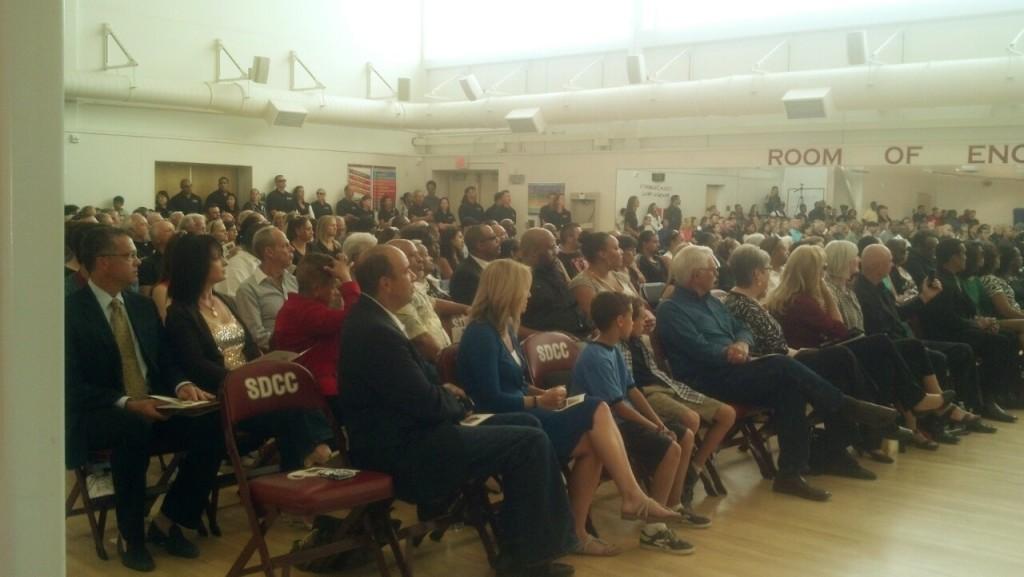 “He fought a good fight, finished the race and he kept the faith,” said a pastor who spoke during a memorial service to celebrate the life of Coach Jim Colbert.

Colbert left an impression on all those he encountered, as evidence by the approximate 250 in attendance at the memorial which took place on campus on Oct. 6.

“He was that father figure we all want in our lives. You know, my father was never around but I got to see coach every Monday and Wednesday and now I’m sure he’s looking down on all of us,” said one former student who took to the microphone to commemorate Colbert’s life and memory with other attendees.

Colbert’s career at City College began in 1990 and stretched over two decades long where he coaching and teaching in the athletic’s department. He worked as a senior professor in health and exercise science.

In the mid-’90s, and with the help of Dean of Health, Exercise and Athletics Kathy McGinnis, he advocated for and then received funding to implement martial arts classes that City College still carry today.

Colbert was personable and remained positive, even as he drew closer to the end.

“My dad was adamant we brought no negative emotions into his final days. He said ‘Hey hey, don’t worry about me. Worry about yourself,'” said his son Dean.

On Sept. 18, Colbert passed away from an aggressive form of brain cancer. He was 73-years-old.

His love for sports was evident from the beginning, even at a young age. He stood out as an athlete at Colorado Springs High School before moving on to Adams State where he attended on both a baseball and football scholarship. He went on to obtain a Bachelor of Arts and Master of Arts.

Colbert began his teaching career by working at Fresno State University in 1990. This move happened during a pivotal moment in history. Colbert began teaching when there were no black coaches working in the California college football coaching scene.

Colbert is survived by his wife Valerie and his children, daughters Karen and Kimberly Leonard and sons Dean, Don, Orin Andrew Jason and Tony Hubbard. His extended family includes his brother Edward and his ten grandchildren and many nieces and nephews.