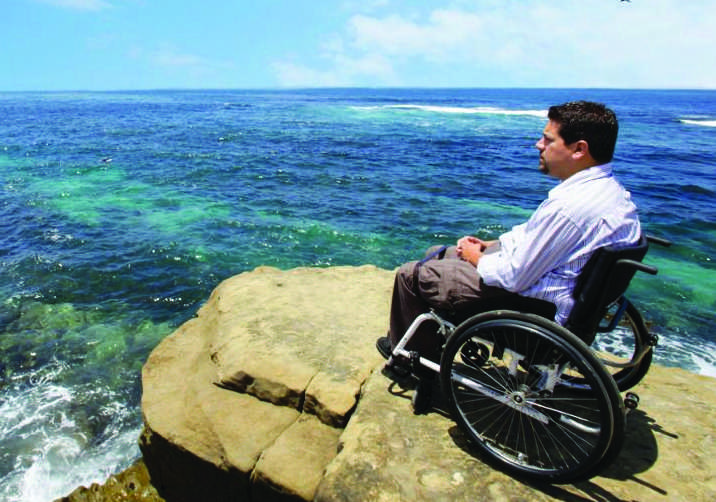 Have you ever had an annoying little itch on your nose? Now, imagine not being able to scratch it. That was one of the small things things Professor Humberto Gurmilan was unable to do for himself after an accident changed his life forever.

Gurmilan, an adjunct communications professor, spoke to students as part of the World Cultures Program and gave life advice that anyone can take a lesson from.

Gurmilan talked about attitude, perseverance and support. These three factors would ultimately play a key role in inspiring a then 15-year-old Humberto that his life wasn’t over.

After his accident, Gurmilan woke up in a hospital, not yet realizing where he was and why he could not move his limbs.

“I could barely see out of the corner of my eye and then I realized I was hurt,” said Gurmilan as he recounted the day.

Confused and stressed, Gurmilan had lost consciousness from shock. His mother and father had received news that their son would make it, however, there was bad news as well. Doctors believed that he would be paralyzed for the rest of his life.

He had no control over his hands or legs and was unable to speak. The accident had severely damaged his spinal cord, leaving him paralyzed from the chest down.

“As time passed, I realized I wasn’t getting better,” said Gurmilan. “All of a sudden things raced through my head and boom, I hit a wall.”

This severity of the situation and the realization that he would never walk again brought on a depression.

“It was very, very hard as a 15-year-old to lose your independence,” said Gurmilian.

Family would visit to cheer him up but as they left, Gurmilan would fall back into his depression. It would eventually fade though as his rehabilitation started.

After six months in the hospital, Gurmilan would return home and continue his life, eventually graduation from high school and then college.

During those six months of recovery, Gurmilan learned life lessons that would become his inspiration. Attitude, perseverance and support from family and friends became his motivation to get better. Soon, he regained control of his hands.

Gurmilan has worked hard to get where he is today, but he knows he will always face the adversity of not being able to walk again. He continues to move forward to this vary day.

His book, “Desde Mi Silla” or “From My Chair,” recounts events from his life and is available in both English and Spanish. His book is currently listed on Amazon.com and all profits are being donated to charity.