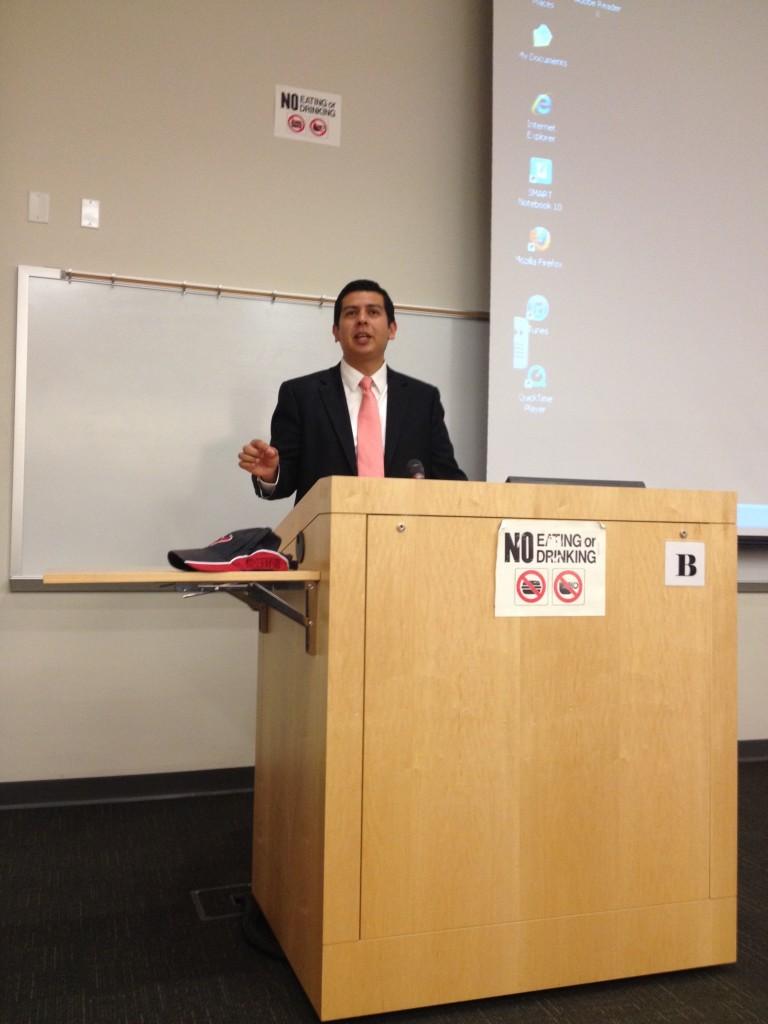 San Diego City Councilman and mayoral candidate, David Alvarez, visited City College Oct. 31 on his latest mayoral campaign. Alvarez addressed his concerns for the community and shared his future hopes and plans for the city of San Diego.

Alvarez took the podium in room V-101 and M.E.Ch.A president Juanita Lopez, who served as a mediator on the day, introduced him to the spectators. The candidate fielded a broad range of questions from students and faculty alike.

The San Diego native opened up about his personal quest that began with growing up in Barrio Logan and eventually becoming City Councilman. He was vocal and proud of his past, including the strong work ethic his parents taught him and learning the value of hard work.

The 33-year-old democratic candidate answered questions ranging from environmental issues to living wages. He also addressed a seldom-mentioned issue menacing the community colleges in San Diego – adjusting to the growth.

“More and more students can’t afford to go to the four year universities,” Alvarez elaborated. “There’s been an influx of people that want to take courses here and having to manage that must be very difficult.”

The councilman spoke of his astonishment and admiration for the amazing things San Diego community colleges are doing to accommodate expansion.

Alvarez is one of the three front-runners for tomorrow’s special mayoral election that will include Nathan Flecther and Kevin Faulconer, among seven other candidates.

If there is a majority winner, they will serve the remainder of former mayor Bob Filner’s four-year term. If none of the 11 candidates wins a majority vote, a runoff election between the top two candidates will take place in February.

The special election is a result of a sex scandal involving Filner. The scandal led to Filner’s resignation on Aug.30, vacating the mayoral seat nine months into his term.

A student-voting poll will be available on campus in the P Building for 7 a.m. to 8 p.m.

To view a full list of the mayoral candidates visit www.sandiego.gov/city-clerk/elections/city/pdf/2013candidatecontactmayor.pdf.