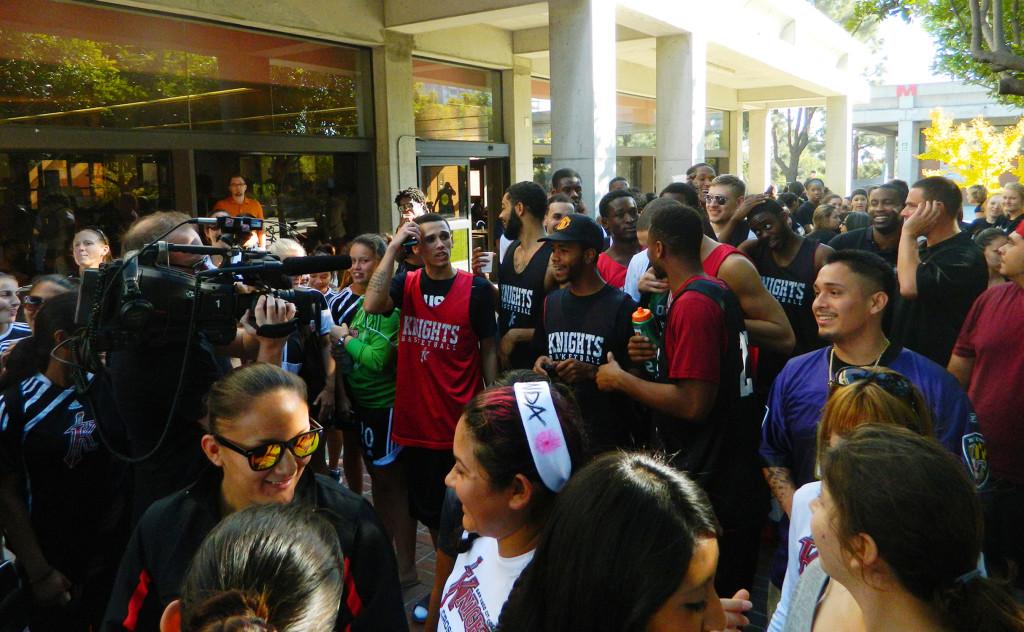 The basketball team, other Lady Knights squads, faculty, local media and students prior to the 2K Fun Run that started in the Gorton Quad and wound through campus. Chris Handloser, City Times.

Live Well San Diego is a countywide initiative to bring a positive change to the well being of its residents. In addition to City College, the 12 program partners include health care providers, community based organizations, school districts, law enforcement, the military and veterans organizations.

He went on to explain; “I think young people take for granted their health, especially if they have good health. And they don’t understand that as you get older, illnesses and other things can happen later in life if you don’t prevent them from happening early in life.”

Several Knights sports teams that participated in the fun run radiated energy and served as examples of the positive changes coach Greer was promoting to the campus.

When speaking of his continuing role on the Live Well committee, as well as his duties as Fitness Director at City College, Greer expressed, “I’m gonna continue doing my job in the best way I can — to promote fitness, promote good health, and promote good quality of life — and hopefully that leads to a good longevity of life.”

In the midst of cheering and clapping as participants crossed the finish line, Interim President Lynn Neault expressed her excitement at the effort to involve everyone.

“There was a huge committee on campus and this is the culmination,” expressed Neault. “One of the reasons I think the county sought us out to be the first ‘Live Well’ campus is because it was students who initiated it, and that’s what they were so impressed with.”

Neault said that that, according to a San Diego County staff member present, this was by far the best Live Well kick off they had for any program yet.

Supervisor Roberts joked during a brief speech about how long it had been since he was a student. He also stated, “I was excited when we were going to have the first college in all of San Diego county in my district, and somewhere I attended.”

“We want to get people to exercise, we have to get healthy eating, and we don’t want them smoking,” Roberts stressed.

Professor Veronica Ortega, along with a few of her students, Greer and others, established the Step Up to Live Well committee. Ortega reported that the committee plans to meet and establish a calendar with a monthly Live Well event.

Even prior to the proclamation, Ortega’s committee made strides in the health and wellness of the students. Depression screenings, HIV testing, blood pressure testing, and healthy new food options in the cafeteria are some of the few so far, and an example of what is to come.