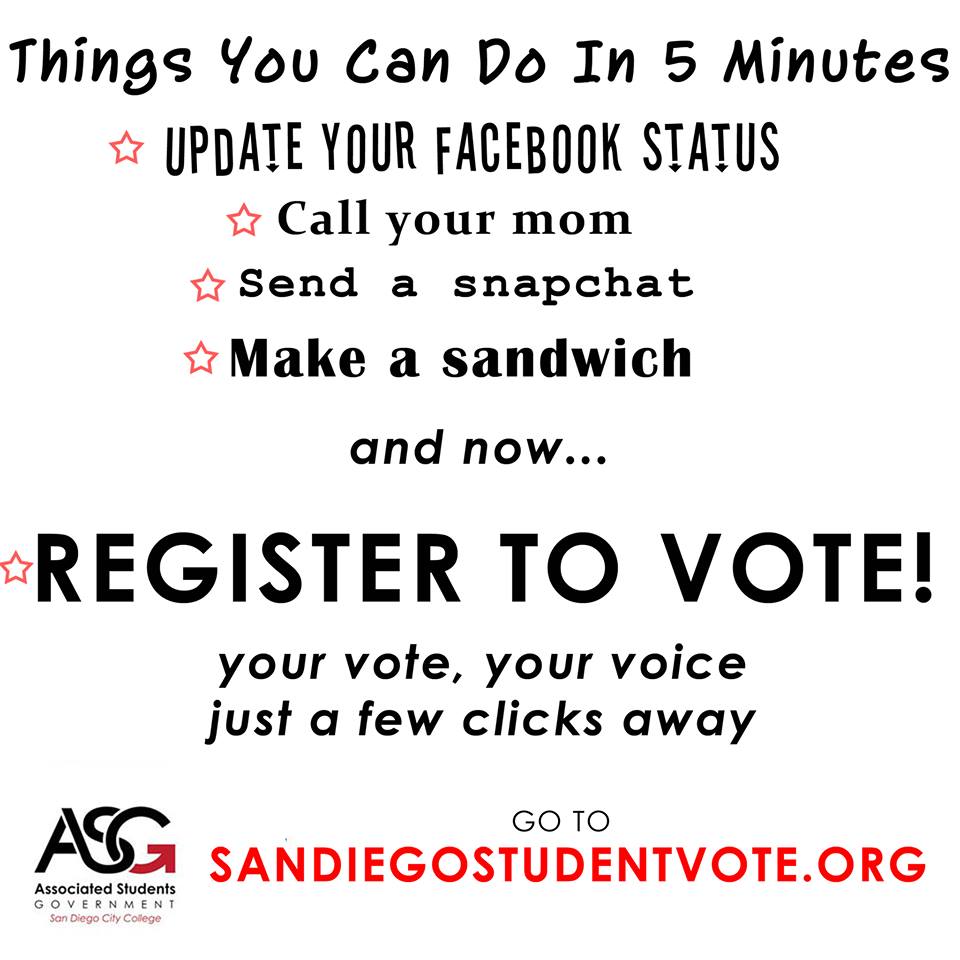 Things students can do in five minutes: Send a Snapchat, call their mom and now, register to vote.

City College’s student leaders launched a website Jan. 7 to make registration easier than ever, in collaboration with three national organizations.

The website, www.sandiegostudentvote.org, serves the 105,000 students who attend City, Mesa, and Miramar and seven Continuing Education Centers. Once students register, they will receive emails reminding them of important deadlines and election days.

The catalysts for this project were ACLU and Rock The Vote, a national, non-partisan organization dedicated to building the political power of young people.

Jonathan Stein, a voting rights attorney for the American Civil Liberties Union (ACLU), spoke to Associated Student Government (ASG) leaders in mid-December to pitch the creation of the website and to seek student leaders who would promote it on campus.

He stressed the power of using the Internet to register hundreds in a few days, rather than the time-consuming task of trying to intercept students on the way to class.

Michael Roderick, vice president of ASG at City, volunteered to promote the site, along with a handful of other students. He also reached out to the leaders of the ASG at Mesa.

“My focus has been for more student involvement, both on campus and in the community, so while the elections were the impetus for bringing this project to San Diego and our campus, I think this is an important issue for us to always be moving forward with,” stated Roderick via email.

All parties involved were strongly encouraging registration by Jan. 27, the deadline to qualify for the San Diego mayoral runoff election on Feb. 11, but students who didn’t make that deadline can register at any time to make their opinions count in this year’s elections.

There will be a gubernatorial primary on June 3 and the general election on Nov. 4, which also will feature a number of statewide propositions.

“The decisions elected officials can have a big impact on students,” said Garcia, who also is an adjunct instructor at City College in the Digital Journalism program and the faculty advisor to the City Times. “That’s why it’s so important for them to register to vote and to actually do so on Election Day.”

General information for voters is available at the San Diego County’s Registrar of Voters.