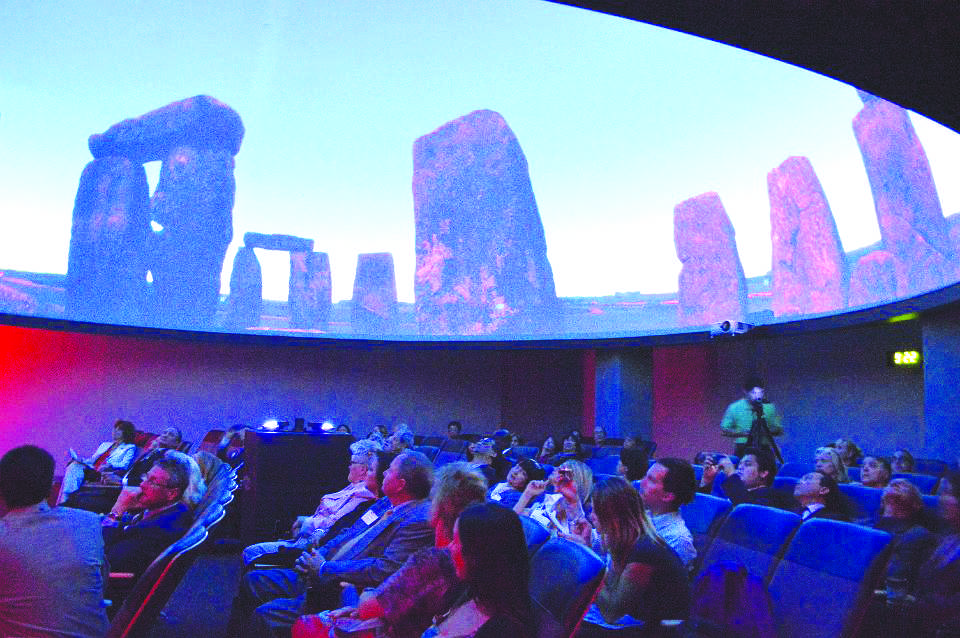 Guests attended a private screening for the opening of the planetarium in the Science building on Feb. 19.Photo credit: Michelle Moran

The new Science Building on campus provides students with first-class, state-of-the-art equipment and rivals any such facility in the country.

Imagine taking a seat under a large dome and taking a short trip to the moon. The stars above you are so bright and close, you feel like you are now in outer space.

The planetarium is just one of the innovative features in the four-story, L-shaped building. The 98,000-square-foot facility includes high-tech equipment. For example, the nuclear magnetic resonance instrument cost $165,000.

The entire project took more than two years to complete and the cost of the bond measure for all new construction totaled $1.6 billion.

Shane Haggard, former City College student and chemistry professor, explains how the new facility and all its equipment are a major step forward for City College and the community.

“It rivals what you see in industry. We are going to give students, now, the best education in science that they can get in any community college,” said Haggard. “We have instrumentation that nobody else does. We have the planetarium that we can provide students with hands-on experience.”

The building opened for classes beginning this semester but the grand opening was celebrated Feb. 19 and began with a demonstration of the new planetarium. As guests waited on the fourth floor observation deck, they were allowed to tinker around with a couple of the technologically advanced pieces of equipment that will be used in the classrooms.

Physics Professor Gerardo Scappaticci had a couple different telescopes set-up for use and explained how they worked. He had one binocular telescope and one Celestron Starbright XLT, which is GPS-controlled and downloads information about location, time and date.

Lisa Will, professor of physics and astronomy, gave a demonstration inside the planetarium, taking the audience to the moon, the North Pole and even Stonehenge. The planetarium has two high-definition, Spitz Inc. projectors. She said City College will potentially be able to produce planetarium shows for the general public.

Following the demonstration, everyone headed downstairs to the courtyard for the ribbon-cutting ceremony. Interim President Lynn Neault addressed a crowd of around 200 people, thanking everyone who was involved in the science facility.

San Diego Community College Board of Trustees President Rich Gross said that they wanted this project to benefit all of San Diego. So they asked that all buildings are green and sustainable, following LEED certifications, and the majority of contracts were issued to small, local businesses.

“We are on track now to receive 41 LEED certifications,” Gross stated.

Interim Mayor Todd Gloria explained that this state-of-the-art equipment will allow us to compete with cities and countries across the world.

“In terms of the investment in this community and helping us vitalize the upper East Village, it’s an important step on a neighborhood level,” said Gloria.

The equipment selected for the building is used in research labs and facilities across the globe. According to Jack Beresford, the district director of communications and public relations, the only community college in the area that has this type of facility.

Students in labs coats performed a modern interpretive dance just prior to the ribbon cutting. They danced the ribbon around the poles in front of the building, setting the stage for Neault to cut it.

“City College students should really be proud of this facility here because it’s the best one in the area,” said Chancellor Constance Carroll.